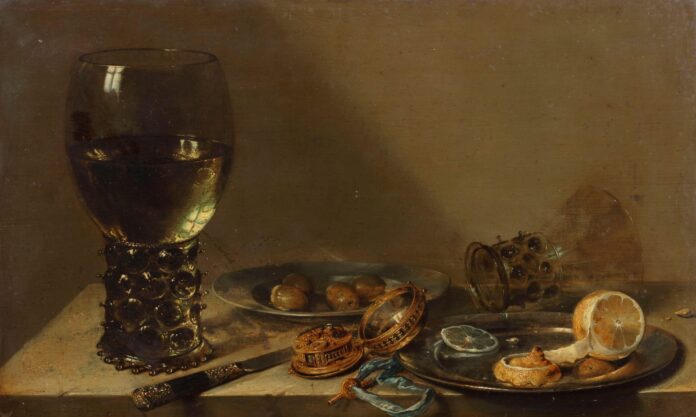 “Nine point-five million for the Titian. Nine point-five,” intoned Sotheby’s auctioneer Harry Dalmeny on Wednesday, moments before he hammered down one of the dozen surviving versions of Venus and Adonis for the top price at the firm’s evening sale of Old Master paintings in London.

A two metre-wide “Titian” selling for the price of a run-of-The-Factory Warhol silkscreen pretty well sums up the current state of the Old Master market in the UK. With the supply of A-plus works by A-plus artists all but dried up, international auction houses like Sotheby’s are having to make the most of B-plus paintings by famous names.

Scrupulously catalogued as “Titian and Workshop”, this canvas, painted around 1555 of the doomed hunter Adonis’s last embrace with an infatuated Venus, was derived from a celebrated primary version of the Ovid-inspired “poesia” which the Venetian master painted for Phillip II of Spain, now in the Prado, Madrid.

This undeniably imposing painting, entered by the family of the Swiss collector Patrick de Charmant, had failed to sell at auction on at least four occasions over the centuries, suggesting that the market had traditionally thought it more workshop than Titian.

Nonetheless, Titian is a famous Old Master brand, and Sotheby’s knows how to market brands. On the night, at least three telephone bidders were in competition, the lot eventually falling to that £9.5m hammer bid, adding up to £11.2m with fees, taken by George Wachter, Sotheby’s New York-based chairman of Old Masters. The painting had been estimated at £8m-£12m.

To put the price in perspective, two autograph quality Titian canvases from that same series of mythological “poesie” were sold by the Duke of Sutherland to the nation for £50m and £45m respectively in 2009 and 2012. The record auction price for an Andy Warhol is £158m.

This latest series of pre-Christmas evening auctions of Old Masters in London saw Sotheby’s and Christie’s each offering slimline selections of around 30 lots. Sotheby’s had the edge this time round, thanks to the inclusion of the Titian and 17 paintings that had been owned by the Spanish collector Juan Manuel Grasset, who died in 2020.

An engineer by profession, Grasset had a taste for precise, but opulent 17th-century Dutch and Flemish still lifes. The pick of these was the beautifully observed panel painting of flowers in a glass vase with insects and fruits by the Utrecht painter Jan Davidsz. De Heem, dating from the 1660s. The work had been bought by Grasset at Sotheby’s in 1987 for £200. Thirty-five years later, five bidders pushed the price up to £2.7m, almost double the high estimate.

The Grasset Collection also included a fine, relatively early Canaletto painting of the Grand Canal, Venice, dating from the late 1730s. More atmospheric than many of Caneletto’s vedute, particularly in terms of its treatment of the sky and sunlit architectural details, this had been bought by Grasset for around £3m in 2008. Dealers in the room were a bit mystified when it sold here to an online bidder for underwhelming £3.7m.

“The condition wasn’t 100%, but it was the best Canaletto offered this year,” says Charles Beddington, a London Old Master dealer who specialises in views of Venice.

Covered by pre-auction guarantees, all but one of the Grasset paintings sold, raising £12.7m, above the high estimate of £10.8m.

“It was a lovely collection, but it was yesterday’s taste. I was worried it would struggle in today’s market,” says Anthony Crichton-Stuart, the director of the London dealership Agnews. “It did really well.”

Overall, Sotheby’s auction achieved a high estimate £33m from 37 lots. There might not have been much bidding from the trade in the room and sales were bolstered by some incongruous later 19th-century paintings, like Lord Leighton’s Old Damascus at £2.2m, but the total was nonetheless the highest for a Sotheby’s Old Masters auction in six seasons.

There isn’t much in the Old Master market that can be described as today’s taste, but finely observed 17th-century still lifes, particularly with reflections in glass, like Sotheby’s De Heem, seem to have a timeless appeal.

A signed and dated 1629 panel painting of a glass roemer, pocket watch and other objects on a ledge by the Haarlem artist Willem Claesz Heda was one of the few works to generate sustained competition at Christie’s £13.1m Old Master paintings sale of just 27 lots the following evening. The total was at least 26% up on Christie’s equivalent sale last December.

Not seen on the auction market since 1919, the Heda inspired a protracted battle between two telephone bidders up to £756,000, three times the pre-sale upper estimate.

Italian view paintings at Christie’s from an “important European collection”, by contrast, seemed very yesterday’s taste. Four lots of middling-quality vedute by names like Francesco Guardi and Antonio Joli all sold for single bids between £138,600 and £315,000.

“It was what it was,” says Nick Hall, an Old Master dealer based in New York, commenting on the quality on offer at Christie’s. Hall, like many trade observers, see how difficult it has become for Sotheby’s and Christie’s to present high quality evening sales of Old Masters in post-Brexit London in both June and December. In New York, where many of the key buyers are concentrated, the two main houses now concentrate their best consignments into one auction in January. “That’s where the market is,” Hall adds.

Sotheby’s and Christie’s New York-based experts were conspicuously active taking telephone bids at these latest London sales, which was hardly surprising, given the dollar’s current strength against sterling.

At Christie’s, Manhattan-based staffers Francois de Poortere and Jennifer Wright took competing bids for Jean-François de Troy’s superb quality, The Reading Party, signed and dated 1735, showing a trio of fashionably dressed friends entranced by a book being read aloud in a forest glade. De Troy might not be many people’s idea of an A+ artist, but this was certainly an A+ quality French 18th-century painting. De Troy made just 11 of these painstakingly observed tableaux de mode. Entered from the collection of the English industrialist Lord Weinstock, it topped Christie’s sale with a price of £2.9m against a low estimate of £2m.

It says a lot about the current state of the art market—and our culture generally—that this museum-quality masterpiece of 18th-century French painting made exactly the same auction price in dollars ($3.6m) as the record paid in March for a two-year old canvas by Flora Yukhnovich inspired by a French 18th-century painting.

When, if ever, is the Bitcoin finally going to drop?