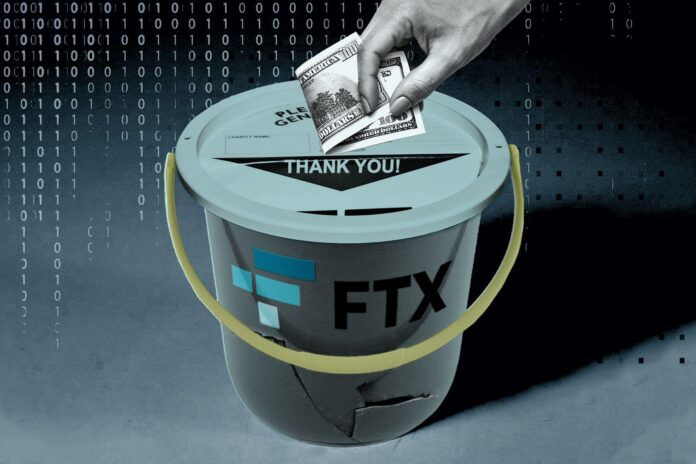 Non-fungible tokens (NFTs) were the buzzword at Art Basel Miami Beach (ABMB) last year. From an official fair conversation, live-streamed on social media, to discussions at institutions such as the Pérez Art Museum Miami and the Flagler Street Art Festival, non-fungible tokens were front and centre in 2021. And of course, there was ample opportunity to buy into the hype. At the VIP opening of ABMB, visitors were led through a whole room full of NFTs courtesy of the blockchain Tezos, an official partner of the fair since last year. Other initiatives mushroomed around the city. At NFT BAZL’s gallery auction, one NFT sold for $300,000, boosted by its chief executive Estelle Ohayon’s prediction that: “NFTs are the future, and this is the way forward”.

Or the way backwards? Just before this year’s fair, the crypto currency exchange FTX filed for bankruptcy, devastating the whole crypto world. Bitcoin plunged to about $17,000, having topped out at around $64,000 a year before. And the market for NFTs collapsed as dramatically—sales volume stood at $9m in November, compared with $93m just six months before, according to Non-Fungible.com.

Oh, and by the way, all this seems to have shattered the much-touted theory that there is an inverse correlation between NFTs and crypto.

This year, NFT initiatives were hugely scaled back in Miami. Granted, there were some events, such as launch parties for Moonbirds and Pudgy Penguins, and some galleries such as Pace Verso were continuing their initiatives. But the heat was definitely off compared with last year.

As well as hammering the wider crypto and NFT world, the FTX disaster is a blow to Miami’s mayor Francis Suarez and his plans to turn the city into a crypto hub. And don’t even mention the promise that FTX would relocate its Chicago headquarters to Miami.

But there is a more significant problem. Another potential victim of the meltdown is the whole Effective Altruism (EA) movement. Briefly, this encourages people to make vast sums of money so they can then donate to good causes, notably “efficient” charities.

But now the whole “make money, do good” ethics of EA have been splattered by the FTX affair because its founder, Sam Bankman-Fried, was the poster boy for the movement and one of the major contributors to the FTX Future Fund. This aimed to support initiatives varying from AI ethics to making better personal protective equipment. Recently the entire team behind the fund resigned, saying they had: “Fundamental questions about the legitimacy and integrity of the business operations that were funding the FTX Foundation and the Future Fund.”

And many are now suggesting that EA was just a way of “greenwashing” by deflecting closer scrutiny of some of Bankman-Fried’s more questionable business practices at FTX.

Speaking from Miami, the philanthropy adviser Scott Stover commented: “Yes, the FTX meltdown has to have an impact on EA. The basic tenets of EA pose serious issues—you have to question if it was attractive to people who were morally corrupt.” Stover hosts the podcast Giving back is dead, which couldn’t be a more apt title for the disaster at FTX.