Home News Canada’s National Portrait Gallery has no collection or physical space—but it does... 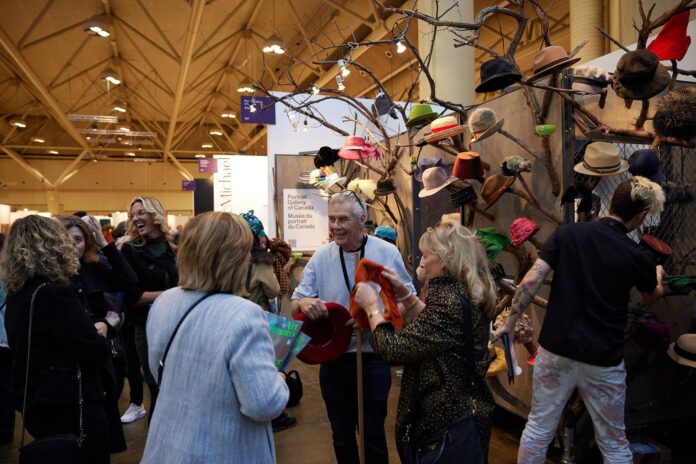 The most recent edition of Art Toronto, Canada’s biggest commercial art fair (27-30 October), included an unexpected exhibitor, the Portrait Gallery of Canada, whose stand displayed a wide variety of colourful headwear. Though it is still primarily an online entity, and has been since 2020, the gallery is hoping to set up shop in or near Ottawa in the not-too-distant future.

The gallery’s primary mission is to create a collection of historical and contemporary portraits reflecting Canada’s history, current contexts and future direction. On the business side, it is a registered, national, non-profit corporation that aspires to partner with the Canadian government down the road.

“The Portrait Gallery of Canada’s focus right now is on programming and building a constituency across the country,” executive director Robert Steven says. “This is about proving ourselves and our ideas first, and trusting that this will lead us to a suitable site and donor support for a future capital campaign in the next few years.”

Steven, who grew up on a farm southeast of Ottawa, became involved last May. “I loved art instinctively,” he says, recalling visits to the National Gallery of Canada when he was a teen. The fledgling portrait gallery’s advisory group already includes notable figures from the Canadian art world, including writer and artist Douglas Coupland, First Nations artist Robert Houle and Bernard Doucet, executive director of the Sobey Art Foundation.

Steven’s enthusiasm for the project is apparent, despite the challenges he faces. “The deepest resource already exists,” he says, referring to Canada’s National Archives. “There are so many ways that portraits appeal, touch or engage with the whole community.” He envisions a bright future for the institution, which has much ground to cover if it is to catch up with the National Portrait Galleries in London and Washington, DC.

Like many endeavours, the gallery, which had hoped to have a site by now, has been impacted by the pandemic, though Steven is undeterred. “I’m in the forever business,” he says. A coveted potential location is LeBreton Flats, a neighbourhood in central Ottawa undergoing extensive redevelopment. The Flats is currently home to the Canadian War Museum and the National Holocaust Monument. In the meantime, Steven adds, “There is an opportunity for a more decentralised approach, such as touring exhibitions. There’s no one we wouldn’t talk to.”

Such a project is not without precedent. Plans were underway for a Portrait Gallery of Canada around two decades ago, when Jean Chrétien was prime minister. The former US Embassy at 100 Wellington Street, directly across from the Canadian Parliament, was to be its home, with a target opening date in 2006 or 2007. But that initiative never got off the ground, and by 2009 the idea was all but laid to rest; 100 Wellington Street subsequently became home to the Indigenous Peoples Space.

How the UAE art scene has innovated during the pandemic