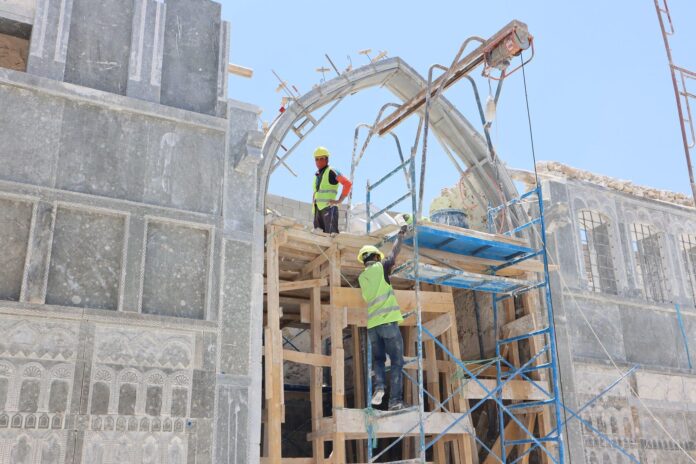 The International Alliance for the Protection of Heritage in Conflict Areas (Aliph) is to open a second office in 2023—in Riyadh, Saudi Arabia. The Geneva-based heritage protection foundation works to safeguard imperilled heritage in war zones. It says the new Saudi office will help protect threatened heritage sites in the Middle East.

For the Saudi government, which has faced international condemnation for its human rights record, it marks a step forward in its ongoing efforts to position the Kingdom as a central player in co-ordinated preservation of global heritage.

The decision was announced in October in Riyadh at Aliph’s 10th meeting, which was attended by Prince Badr bin Abdullah bin Farhan Al Saud, the Saudi culture minister. Sixteen new heritage projects totalling $8m were also announced, bringing the number of Aliph initiatives to 180 in more than 30 countries. “The world understands that Aliph has an effective model for saving world heritage,” Thomas Kaplan, Aliph’s billionaire businessman chairman, tells The Art Newspaper. “We are a lean team of 15 people. We have very little bureaucracy and can get to emergency areas quickly.”

Aliph has been active in the Middle East since its foundation in 2017. The organisation has worked to safeguard the Minaret of Jam in Afghanistan following attacks on the monument by the Taliban. It donated $85,000 to help rebuild the Raqqa Museum in northeast Syria, and provided $900,000 for the digitisation and enhancement of Iraq’s written heritage. Its work is financed by seven governments—including France, Saudi Arabia and China—as well as private donors including Kaplan and the Swiss businessman Jean-Claude Gandur. It raised $90m in funding this year, with donations of $30m pledged from the Saudi and French governments and $20m from the United Arab Emirates.

The Riyadh base will facilitate operations mainly in the Middle East and North Africa, while Geneva will remain responsible for overall co-ordination, Kaplan says, with the Saudi government, which is fully funding the project, “looking for new ways to fund Aliph beyond the $30m it recently provided”. Saudi authorities will have no additional decision-making power in Aliph matters, Kaplan adds; it has not been decided how much they will donate to the project or how many staff the office will employ, he claims.

Prince Badr has a place alongside Kaplan on Aliph’s board, while Kaplan is contributing to AlUla—a government-backed project to transform the archaeology rich Al-’Ula region into the Kingdom’s heritage capital—through his efforts to save the Arabian leopard. Kaplan, who owns the world’s largest collection of Golden Age art, told The Financial Times last year that an exhibition of his Rembrandt paintings in Riyadh was “in the works”.

The project reflects the broader rise of the Saudi capital as a major world centre, Kaplan suggests. “Riyadh is an extremely attractive place to live; it is one of the world’s most burgeoning and blossoming cities. The advent of Mohammed Bin Salman’s reforms has made it a cosmopolitan and vibrant city, and a magnet for talent.”

Global cultural institutions of various kinds—including British museums such as the Tate, the National Gallery and the British Museum—have recently refused to collaborate with Saudi-backed initiatives. In explaining the move, commentators have cited the country’s poor human rights record, including the alleged assassination of the journalist Jamal Khashoggi in 2018.