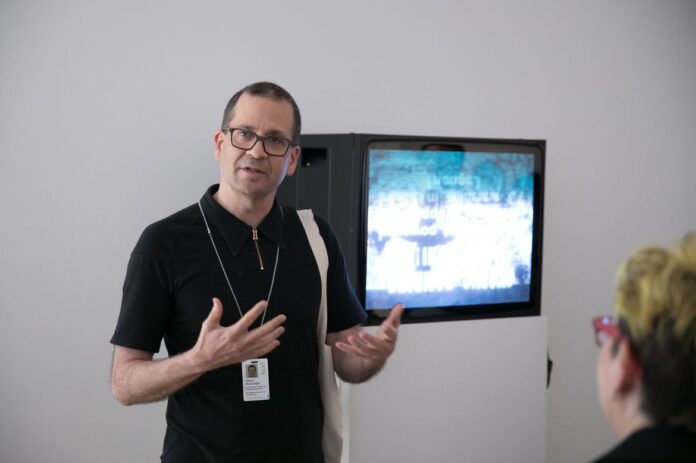 The director of UCLA’s Chicano Studies Research Center is stepping down after nearly two decades.

hen Chon Noriega became director of the UCLA Chicano Studies Research Center, he saw it as an opportunity for him to take some of the things he was doing at other institutions around the country — bringing artist papers into archival settings, developing media-based teaching materials on race and ethnicity, and curating exhibitions and festivals — and bring them into one place at UCLA.

He also considered it vital to connect the center’s mission with stakeholders on campus, in the civic sector and in the community.

“I had to develop a research profile that touched upon distinct disciplinary areas where Chicano and Latino studies faculty were active across campus, something I have tried to maintain throughout my tenure,” Noriega said.

Nearly two decades later, Noriega is preparing to step down, having accomplished far more than he ever set out to.

Since Noriega took over as director in July 2002, the UCLA Chicano Studies Research Center has:

He also helped establish four endowed funds and has overseen the development of projects and programs in partnership with more than 150 community organizations, public institutions, and other colleges and universities.

“Chon Noriega’s visionary leadership of the Chicano Studies Research Center in the past two decades has taken it to new heights,” said David Yoo, vice provost of UCLA’s Institute of American Cultures. “His dedication to preserving Chicano/Latino history and bringing greater visibility to Latino art and film is remarkable, important and truly appreciated. He leaves behind work that keeps the CSRC at the forefront of the conversation on diversifying both our public culture and higher education.”

The Chicano Studies Research Center was established in 1969, emerging in the midst of a social protest against profound disparities in educational access for people of Mexican descent in the United States. The center was designed to transform the academic environment on campus, within higher education and across society through original research on the Chicano and Latino communities in the United States.

“The CSRC’s work is as important as ever,” Noriega said. “The Latino population has grown exponentially while inclusion and access remain severely limited. The CSRC will continue to serve as a resource and a source of inspiration for our community.”

Two of the center’s most high-profile, recent public projects were also among its most esteemed.

From 2017 to 2019, selections from more than 25,000 negatives from the bilingual La Raza magazine and newspaper (1967–77) formed the basis of a critically acclaimed museum exhibition on La Raza at the Autry Museum of the American West. The CSRC developed the exhibition, which was part of the Getty initiative Pacific Standard Time: LA/LA — a far-reaching and ambitious exploration of Latin American and Latino art in dialogue with Los Angeles, and published the award-winning exhibition catalog.

“It was a community photographing itself,” Noriega said in a 2017 interview. “It’s not just about the publication, but the larger universe of images that were generated and how a dozen and a half people went out and tried to look at their world differently than the other two major sets of people photographing them, which were the traditional media and the L.A. County sheriff’s department.”

Noriega, whose tenure officially concludes June 30, is the ninth individual to lead the center as director. In the 19 years he led the center, Noriega has led multidisciplinary research projects, mentored a generation of scholars and arts professionals, and curated major exhibitions that have increased the public visibility of Latino art, culture and history.

“The thing I’m most proud of is building up the archival collections and the scholarly publications as continuing resources that are available for future students, scholars and community members — and doing all of that in collaboration with other institutional and community-based partners,”  said Noriega, a distinguished professor of film, television and digital media in the UCLA School of Theater, Film and Television. 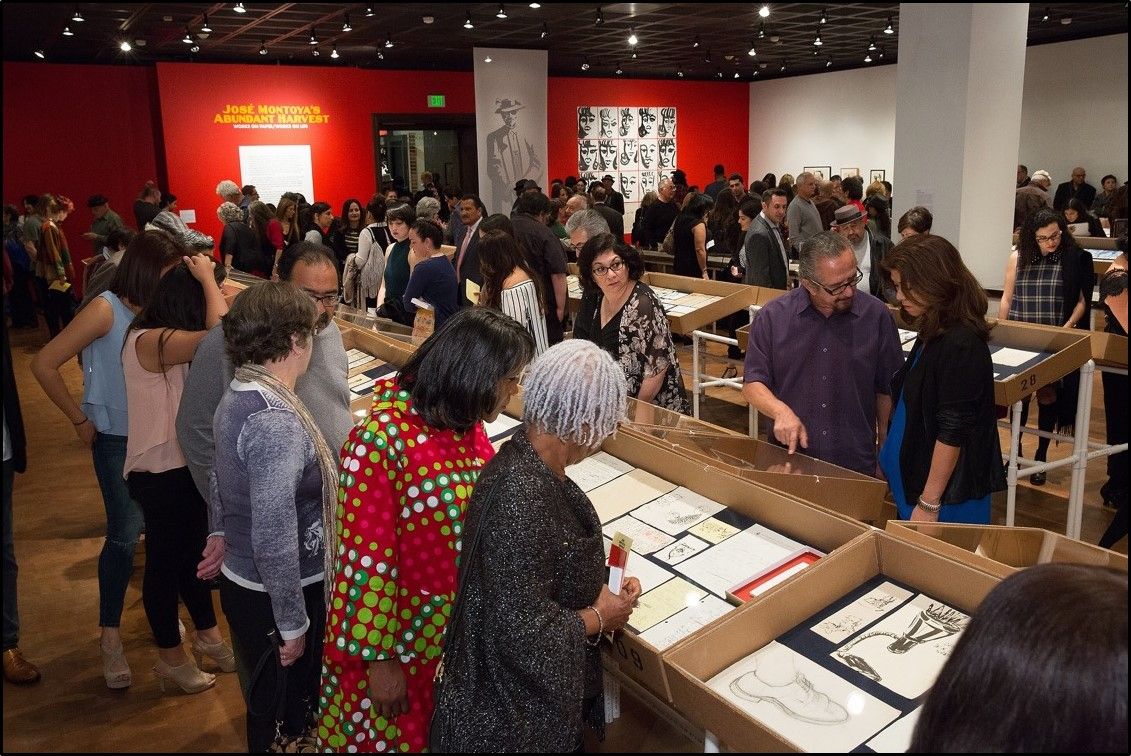 Reed Hutchinson/UCLA
A crowd at the Fowler Museum at UCLA on the opening night for “José Montoya’s Abundant Harvest: Works on Paper/Works on Life,” which UCLA professor Chon Noriega helped curate.

The recently named Guggenheim fellow will return to focusing on his research and scholarship once he is no longer the director of the center.

Noriega’s research has focused on two broad and overlapping disciplinary areas: cinema and media studies from the early 20th century to the present, and art history with a focus on the contemporary period beginning in the 1950s.

His explorations have focused on the history and analysis of national and ethnic cinemas, while also bringing to light extensive bodies of work by Latino avant-garde filmmakers and experimental media artists since the 1950s. He has also engaged in policy-oriented research and advocacy, including a groundbreaking study of Latino actors in the Screen Actors Guild.

As a scholar of art history, Noriega has focused on the study of individual artists and groups that work across a variety of media, the study of particular art forms with respect to race/ethnicity, and critical analysis of the social and institutional dynamics behind the circulation and presentation of art.

His focus on visual mediums has led him to curate numerous photography and film/video collections. With grant support from the Ford and Rockefeller foundations, he recovered and conserved the first five Chicano-directed feature films, which had been considered lost. One of these films, “Please Don’t Bury Me Alive!/Por Favor No Me Entierren Vivo!” (1976), was subsequently added to the National Film Registry of the Library of Congress in 2014.

“For me, playing an active role in securing materials for archival preservation, access and public exhibition is foundational to my research, but it is also a question of professional ethics,” Noriega said. “To do otherwise is to allow one’s research agenda and teaching to be defined by the archival and public neglect of the Latino population.”

An earlier show he curated, “Phantom Sightings: Art After the Chicano Movement” (2008–10), focused international attention on emerging Chicano artists born after the civil rights era and inspired a new generation of high school and college students to study Chicano art with an eye toward becoming curators, critics or scholars. It was developed at LACMA and later traveled to museums across the United States and Mexico. Co-curator Rita Gonzalez, who worked at CSRC as a graduate student, is now the head of contemporary art at LACMA.

In 1996, while still an assistant professor at UCLA, Noriega became editor of Aztlán: A Journal of Chicano Studies, a peer-reviewed journal published by the center, which had fallen out of publication. He returned the journal to a regular publication schedule, quickly building up a diverse and multigenerational submission pipeline. By 2000, he had the CSRC Press publishing scholarly books once again, after a nearly nine-year absence, and developed several new book series, which have been distributed by two university presses.

Outside of UCLA, Noriega has also been active in facilitating access for underrepresented groups working in media and the arts. He is co-founder of the National Association of Latino Independent Producers. In 2013, he worked through LACMA with Brooke Davis Anderson to establish a national undergraduate mentorship program to diversify the curatorial ranks at five comprehensive museums located in minority-majority cities. He has made presentations to the U.S. Commission on Civil Rights, the U.S. Congressional Hispanic Caucus and U.S. Congressional Entertainment Caucus.

Among the many awards he has received are the Mexican American Legal Defense and Education Fund’s Excellence in Community Service Award (2014), National Hispanic Media Coalition’s Impact Award for Outstanding Service to the Latino Community (2018), the American Association of Hispanics in Higher Education’s Distinguished Leadership Award (2020) and the Distinguished Editor Award from the Council of Editors of Learned Journals (2020). Earlier this year, the Society for Cinema and Media Studies recognized him as a “pioneer of film and media studies” through its online oral history project.

Over the next year, Noriega will use his Guggenheim Fellowship to complete a book-length study on destructivist artist Raphael Montañez Ortiz, who also founded the first Latino art museum, El Museo del Barrio, in 1969.

“Serving as CSRC director has been a life-changing experience, and I am grateful to have worked with so many dedicated and inspiring scholars, staff, students and community partners,” Noriega said.

Spotlight: Artist Mequitta Ahuja Tells Her Family’s Story Through Portraits Based on Her Late Grandmother’s Research