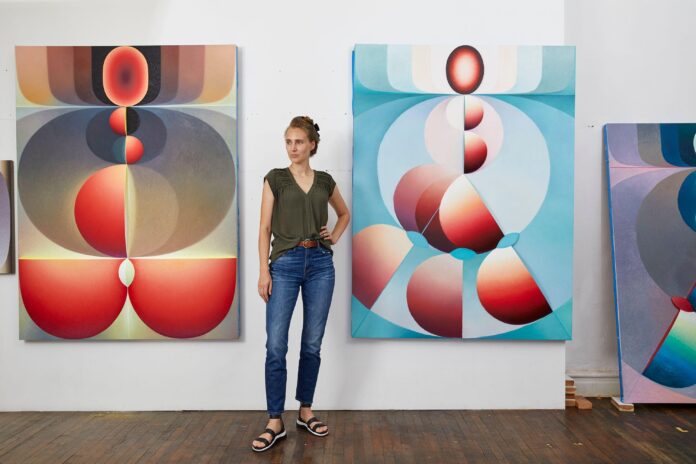 “Motherhood never leaves you,” says the artist Loie Hollowell from her studio in Brooklyn. “The memory of giving birth embeds deep into the cellular structure of your body. I’ll forever be processing it.” She is speaking ahead of the launch of Contractions, her first NFT series, which consists of 280 generative digital works and a limited number of physical paintings. It drops today (28 October) on the sales platform Art Blocks in collaboration with Pace Verso, the web3 arm of Pace gallery, which has represented the artist since 2017.

The series is one of many by Hollowell based on female bodily processes—in this case, the experience of giving birth to her daughter, Juniper, in April 2020. The works feature a number of orbs representing various parts of her body, such as her head and vagina, during labour; some of these orbs are depicted with their centres open to varying degrees, relating to the ten stages of cervix dilation required to begin the “pushing” stage of childbirth. Bisecting lines of black and white mark the “intense pain and then stillness” that occurs during and between contractions, she says. Hollowell renders all this in her signature style—luminously hued geometric compositions reminiscent of Neo-Tantric paintings and Light and Space constructions—that has catapulted her to art world fame in recent years.

Hollowell, who remains “somewhat sceptical” of NFTs, was approached by Art Blocks to create this series around the same time this year that the US Supreme Court overturned Roe v. Wade. Art Blocks encourages artists to donate 25% of profits above resting price to a charity—for Hollowell, the timing helped overcome her hesitancy and made her choice clear. She will donate a quarter of the sale proceeds to two US non-profits: Midwest Access Coalition, a practical abortion fund based in the Midwest, and ARC-Southeast, which provides funding and logistical support to individuals seeking reproductive care, including abortion services, in six southern states.

That the artist should take such direct action on matters of reproductive rights will come as no surprise to those familiar with her practice. Several early bodies of work by Hollowell are “essentially abstracted biographic paintings” about an abortion she had when she was 28, which explore the tumult, freedom and other complicated feelings she experienced at the time. “The whole direction of my work in the past six years all comes out of the fact that I’ve had an abortion,” she says.

Still, she was encouraged by gallerists and advisers early in her career to not mention abortion for fear of alienating collectors, and instead to focus on the “more formal elements” of the work. It was only after a few years that she felt comfortable to discuss “the conceptual thesis” behind them. Since then, she’s been talking about it “to whoever will listen”, but says that her words are still “largely whitewashed”.

Speaking of control and autonomy, Hollowell notes that the NFT series will also allow her to wrest back some control of her mushrooming secondary market. At auction, her paintings now regularly eclipse their six-figure estimates to sell for upwards of $1m. Her highest price stands at $2.1m at Sotheby’s Hong Kong in 2021 for a sculptural painting—eight of her ten highest price at auction have been made in Hong Kong.

“I’ve been really frustrated watching my work go up on the secondary market,” Hollowell says. “It feels like a slight each time, especially as I’ve met so many of these collectors. The resale rights built into the NFT smart contract are therefore a huge bonus.” Smart contracts would also help her keep track of where the work goes once it is sold, something she said that, prior to signing to Pace, she was bad at. This proved to be an issue when she attempted to source a number of her earliest works for her first solo institutional exhibition, currently on view at the Manetti Shrem Museum of Art at the University of California, Davis until 8 May 2023.

The NFTs will be offered for 5ETH (around $1,555) each via a Dutch auction process, meaning the initial price is reduced until a buyer is found. A number of paintings from the series will also be on Pace’s stand at the WestBund art fair in Shanghai next month, each offered for $10,000.

Despite her reproach of certain market forces, Hollowell expresses deep gratitude for the support a large gallery like Pace has brought her, especially in relation to her own reproductive choices. “I waited until I had a secure gallery to have children,” says Hollowell, joking that, at 37 years, her last pregnancy was “basically a geriatric one”.

Her husband has for several years now assumed the role of primary caregiver. As a result, Hollowell says, she has faced an easier time handling childcare and a career than some of her friends “who have had to sacrifice a lot of time in their studio”. She also notes that this issue is highly gendered: “I have a lot of female friends who are successful who don’t have kids, and a lot of male artists who are successful who do have kids—I didn’t see the same stressors in their careers as their female counterparts.”

Yet even with help, she says there is still an important conversation to be had, at least in the West, about the pressures facing mothers to rush back to work after they’ve had a baby. “Even with the security of Pace I still felt pressure to produce. Just one month after giving birth I was back to work for an upcoming solo show.”

These conversations, she says, are equally vital when discussing reproductive rights and she hopes her work will spur a wide range of conversations. “Roe v. Wade isn’t just about abortion”, she stresses. “It’s equally as important to talk about women who want to give birth but lack access to solid care, or require financial help once they have kids.”

Hollowell cites a number of factors that make rearing children in the US a hostile proposition, from a lack of comparable pay between men and women, to paltry childcare compensation. These challenges, she says, are being discussed among women and their communities but are not priorities for politicians. More locally she points out that until very recently New York City did not provide pre-kindergarten classes in public schools.

“This conversation needs to encompass all types of birthing and non-birthing bodies,” she says. “Care must be framed as something more holistic if we’re ever going to win this fight.”

Looking for a Rising Star? Here Are 6 Artists Poised to Break Out After a Strong Showing at Armory Week 2022