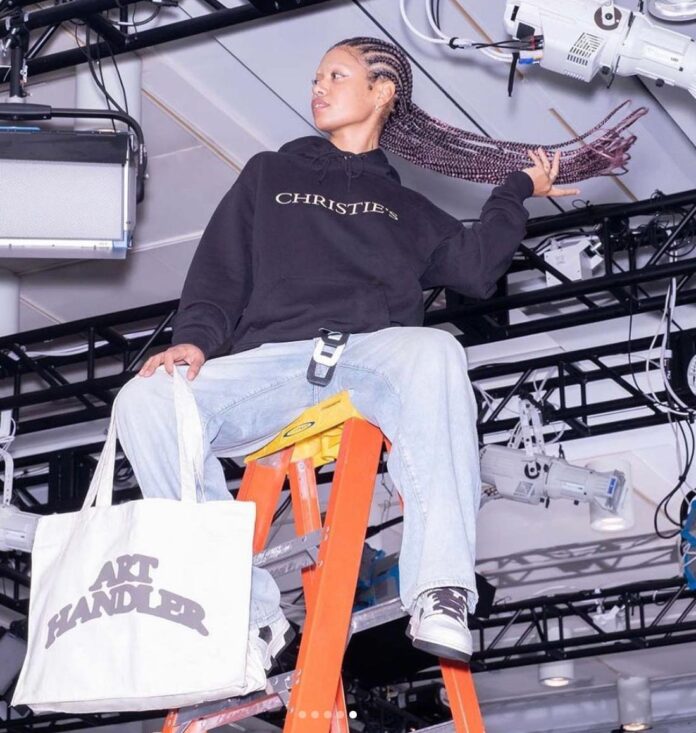 A collaboration between Christie’s and the aptly named lifestyle and media company Highsnobiety ruffled the feathers of a crucial labour force within the art market that is often seen but rarely heard—art handlers.

In an attempt to promote Department X, Christie’s newly launched streetwear, sneakers and collectibles initiative, the auction house and Highsnobiety launched a “merch collection” consisting of sweatshirts, t-shirts and tote bags emblazoned with the phrase “Art Hander” in a bubbly, glittery typeface. Items in the collection were priced between $50 and $125. Art handlers, who for years have said they are underpaid by the auction houses and galleries who depend on them, took offense.

One veteran art handler took to Instagram to air her frustration with the project. “When I saw the collab between Highsnobiety and Christie’s, I cringed, they exploit the allure of our aesthetic and culture, being an art handler is something very specific and skilled, maybe now that Christie’s is exploiting our aesthetic, are they willing to finally pay their handlers a living wage,” she said in a post that satirised the collaboration with the image of a white t-shirt printed with the words “Christie’s exploits art handlers”.

According to that art handler, who goes by the Instagram handle @sugarbombing, she has been paid anywhere from $20 to $40 per hour, or given a day rate of around $300, as a freelance art handler, “though some galleries are more generous than others”. In most cases, she says, that employment agreement comes with a predetermined number of hours per day, but 90% of the time they are expected to work much more, especially during art fairs, during which a shift can begin as early as 6am and end as late as 2am.

“The reality is, it’s almost impossible for an art handler to afford living in New York City, or any of the few metropolitan cities where our jobs exist, Paris, London, Los Angeles,” she told The Art Newspaper. “Do you think it’s really fun to glamorise our lifestyle? And if they are going to use handlers as icons, what do we get in return? If we are appreciated enough to become a symbol, don’t we deserve a raise, or at least a living wage?”

This summer, rents in Manhattan and Brooklyn reached record levels, and by all accounts will continue to climb. In May, the median monthly rent in Manhattan was $4,000, according to a report by the brokerage firm Douglas Elliman, up 25% from May 2021. The average rent was around $5,000. Prices were not much better in Brooklyn, where the median rent was $3,250, an 18% bump from last year. Landlords in New York City often require renters to earn around 40x their monthly rent per year in order to sign a lease. In Manhattan that means most renters need a household income of around $200,000 per year—in Brooklyn, $130,000. At the high end, an art handler with over 20 years of auction house experience often makes around $50 per hour, sources told The Art Newspaper, which comes to just under $69,000 a year after taxes.

But the vexation goes beyond an art handlers’ paychecks. According to a senior art handler at Christie’s, members of the auction house’s art handler union bargaining team were frustrated by the depiction of art handlers as “unserious”. Promotional photos for the collaboration showed one model with a Christie’s shirt covering his face as if hiding from paparazzi. Another shows a woman with an Art Handler sweatshirt and tote bag casually sitting on the top cap of a ladder, inches away from ceiling rafters outfitted with lights and tightly wrapped wires.

“I’ve been working contemporary and modern evening sales for more than a decade,” the senior art handler, who spoke on condition of anonymity for fear of reprisal, told The Art Newspaper. “We regularly handle pieces worth hundreds of thousands of dollars, if not millions. What we don’t do is hang off of equipment. That’s not how we should be illustrated.”

After only one day of online chatter, Christie’s and Highsnobiety appear to have gotten the message. The latter removed a post announcing the launch of Department X from their Instagram feed. The web page announcing the collaboration has been taken down, as has the link to purchase the gear. Neda Whitney, a senior vice president at Christie’s and head of marketing for Christie’s America who had posted behind-the-scenes video from the “Art Handler” photo shoot on Instagram, has since deleted them, according to Hyperallergic.

According to a source at Christie’s, an internal meeting was called for this morning (6 October) during which a senior executive team member apologised to the art handlers for how they were depicted in the campaign.

“Christie’s art handlers are valued members of our global team—dedicated, skilled and hard-working,” a spokesperson for the auction house said in a statement. “We offer our sincerest apologies to our colleagues and to all who were offended by our recent marketing campaign. We take this matter seriously and are taking appropriate action to ensure this does not happen again.”

“It’s a form a class tourism, like Balenciaga appropriating the Bernie Sanders campaign logo,” says a spokesperson for the Art Handlers Alliance(AHA), a labour advocacy group for art handlers. “This is a common thing, this cosplaying working-class culture while denying pay raises, cutting jobs and coming off of record earnings. Auction houses are operating at an accelerated rate and auctions keep getting added to an already busy yearly schedule. It’s not sustainable.”

Auction houses have been remarkably successful in the last few years, thanks to nimble digital manoeuvring amid the pandemic and a blurring of the traditional sales format, making more art available to more buyers. Fuelled by high-profile sales from the collections of Anne Bass and Warhol’s Shot Sage Blue Marilyn (1964) for a record $195m (with fees), Christie’s reported $4.1bn in total sales in the first six months of 2022, an 18% bump from last year’s $3.5bn take during the same period. According to the Wall Street Journal, Sotheby’s last year sold $7.3bn in art.

Whether or not this controversial campaign will lead to better working conditions or higher wages for art handlers at Christie’s and beyond is unclear. But their message has been heard by the auction house’s topmost executives. The AHA spokesperson notes that, since this ordeal began, Christie’s president in America Bonnie Brennen has started following the group on Facebook.

Museums Need to Be Braver. Here’s How Campus Art Galleries Can Offer the Sector at Large a Roadmap for Reinvention

No to Modernism, yes to arts and crafts: a look at the creative tastes of King Charles III