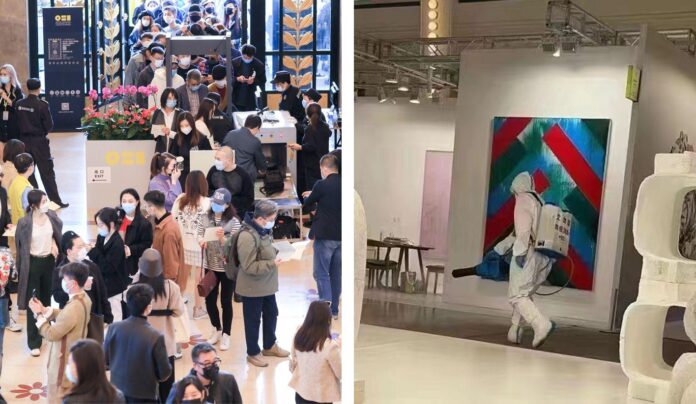 The Chinese social media platform WeChat was today flooded with images of crowds fleeing from Shanghai’s Art021 fair amid rumours that a positive Covid-19 case has shut down the event, which opened yesterday and was planned to run until 13 November. One particular image of a hazmat-suited dabai—a local term for the volunteer healthcare workers helping local authorities during the pandemic—disinfecting the fair has quickly gone viral.

The fair’s co-founder Bao Yifeng tells The Art Newspaper: “As per this year, disinfection has been required and we continue to disinfect and sterilise all public areas and passageways, and not toward any of the artworks. Currently we are still discussing with the relevant government authorities regarding the reopening of the fair. [We] will notify you as soon as possible.”

But others on the ground tell a different story. Speaking anonymously from the Shanghai Exhibition Centre, where the fair is held, a fair visitor tells The Art Newspaper: “From this morning the second floor of the building’s east wing was already in lockdown. But at around 2pm they only allowed people out but not in. Everyone was evacuated out because of a guard, I think, potentially tested positive.”

China’s strict Covid-19 measurements, which have shuttered most mainland fairs since the pandemic, have proved unpopular with many dealers—a number of whom disagree with the decision to close Art021. “It shouldn’t be any sort of big deal, but the government is always so idiotic about these Covid prevention measures,” one participating dealer, who wishes to remain anonymous, tells The Art Newspaper. Eight exhibitors confirmed that they had been ushered out early in the afternoon, but most declined to comment as they remain unclear about what happened or what the current situation is.

At the time of publication, exhibitors locked out of the site remain concerned over the level of protection being given to works in the fair. They received a brief amount of time and a roll of thin plastic film wrap to cover works before being ejected. “I’m really worried for all the art in there,” one anonymous dealer says. “It’s very concerning as to whether the sanitising crew will care about them at all.” The extreme protocols of zero Covid include thorough sanitisation of objects and areas with close proximity to a positive patient, despite little evidence that the airborne disease is transmitted over surfaces. The Chinese language acquired a new word xiaosha, or kill by sanitising, this year.

Art021’s other co-founder, David Chau, posted to his WeChat today a statement: “Refute the rumors! Please don’t panic. It’s not sanitising the work. This is a normal, daily public area cleanup. We have to do it every year! It was misinformed. Please don’t post that photo to cause the wrong panic.”

Both 021 and the West Bund Art & Design Fair next door require all visitors and workers to have received a negative PCR test result within 24 hours of admission, a rule that has left many visitors at the multi-building West Bund stuck between sites as their green codes click over to 48 hours.

Venue lockdowns have become common as China struggles to eradicate the Omicron strain. These include a shut down on 31 October of Disneyland Shanghai over a single infection. It is unclear at this point whether 021 will reopen over the weekend. Also unclear is how many people at the site will be deemed either a “close contact” and therefore removed to central quarantine for at least five days, or a “secondary contact”, which requires one week of home quarantine.

By evening Shanghai time today, a number of Wechat posts that shared the viral hazmat-suited dabai image had been taken down. The site was also flooded with posts expressing support for Art021, which commemorates its tenth edition this year. The Art Newspaper understands that a number of those who had been at the fair site have now started receiving calls from China’s Centre for Disease Control, with further instructions pending.