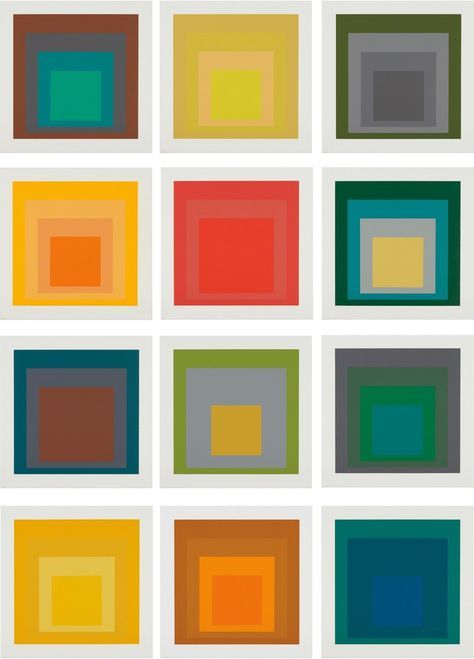 To this day many art historians argue about whether we should refer to Josef Albers as a German or an American artist. 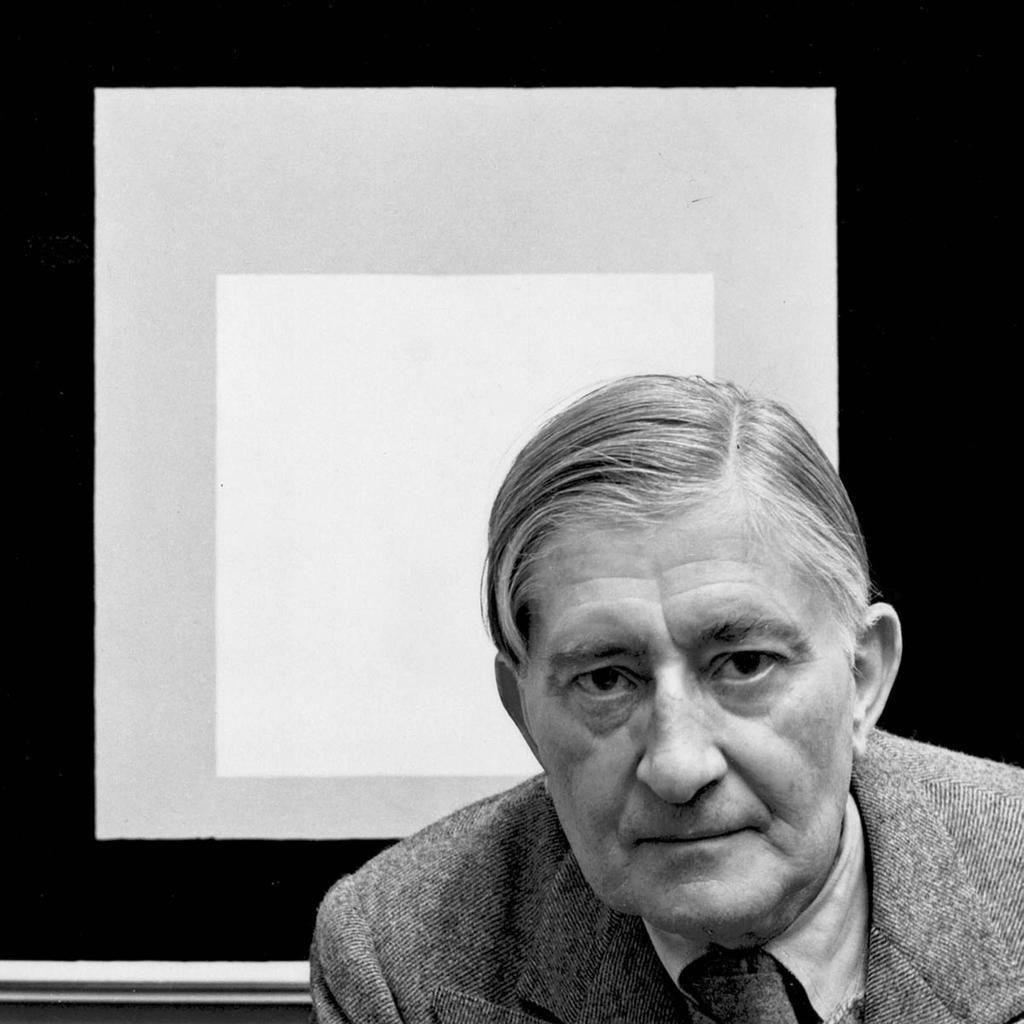 In fact, Josef Albers was born on March 19, 1888 in Bottrop, Germany. Already at a young age Josef Albers was fond of many things – drawing, literature. As for the latter, he not only read a lot, but also tried to write poetry himself.

Josef Albers is one of those artists who received a large, versatile artistic education: He studied at art institutions (the Royal School of Art in Berlin and the Essen Academy of Art) and also took private lessons from an artist in Munich.

Josef Albers began his active work in 1920. At that time the artist moved to Weimar and entered the Higher School Bauhaus. As a student, he authored his first lithographs and woodcuts. 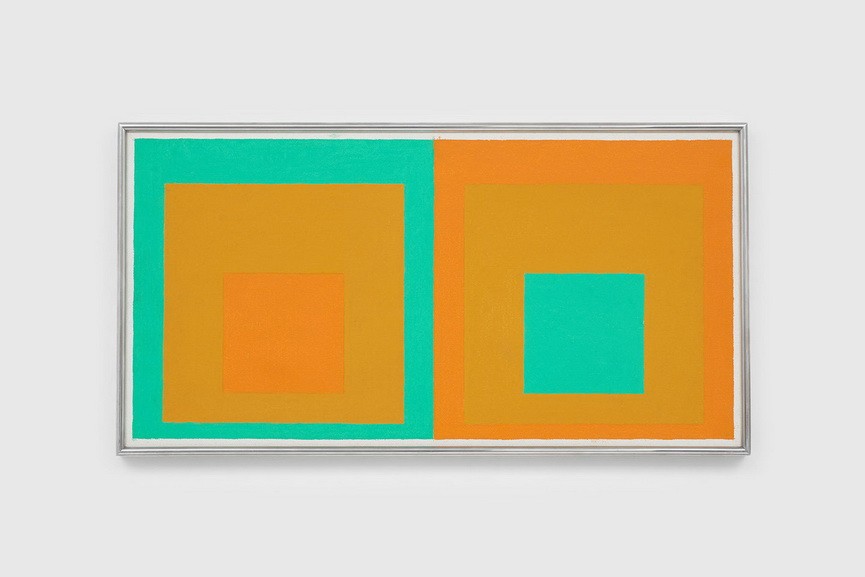 At the same time, Albers also develops his skills as a designer – it was due to his work in a furniture factory, where his responsibility was to create sketches of furniture.

1933 was a turning point in the artist’s fate – he was evacuated to the United States. Here he begins his teaching activities in both painting and design classes.

From his class students come out masters of their craft, and many of them, in the future, become famous. Josef Albers himself is not lost among American artists – his work is of interest to masters of the brush, who work in different genres and different directions. The name of this artist is put next to the name of Victor Vizarely, calling them both the creators of such a direction in art as op-art.

The Bauhaus was a German school of art, architecture and design that lasted only 14 years, from 1919 to 1933 in Germany. Nevertheless, its legacy has always been the subject of close attention by architects and designers.

In the last decade the work and research of Josef and Annie Albers has come into focus. Artists, designers, teachers and art theorists, they inspired each other and influenced many of the most important representatives of twentieth-century art. 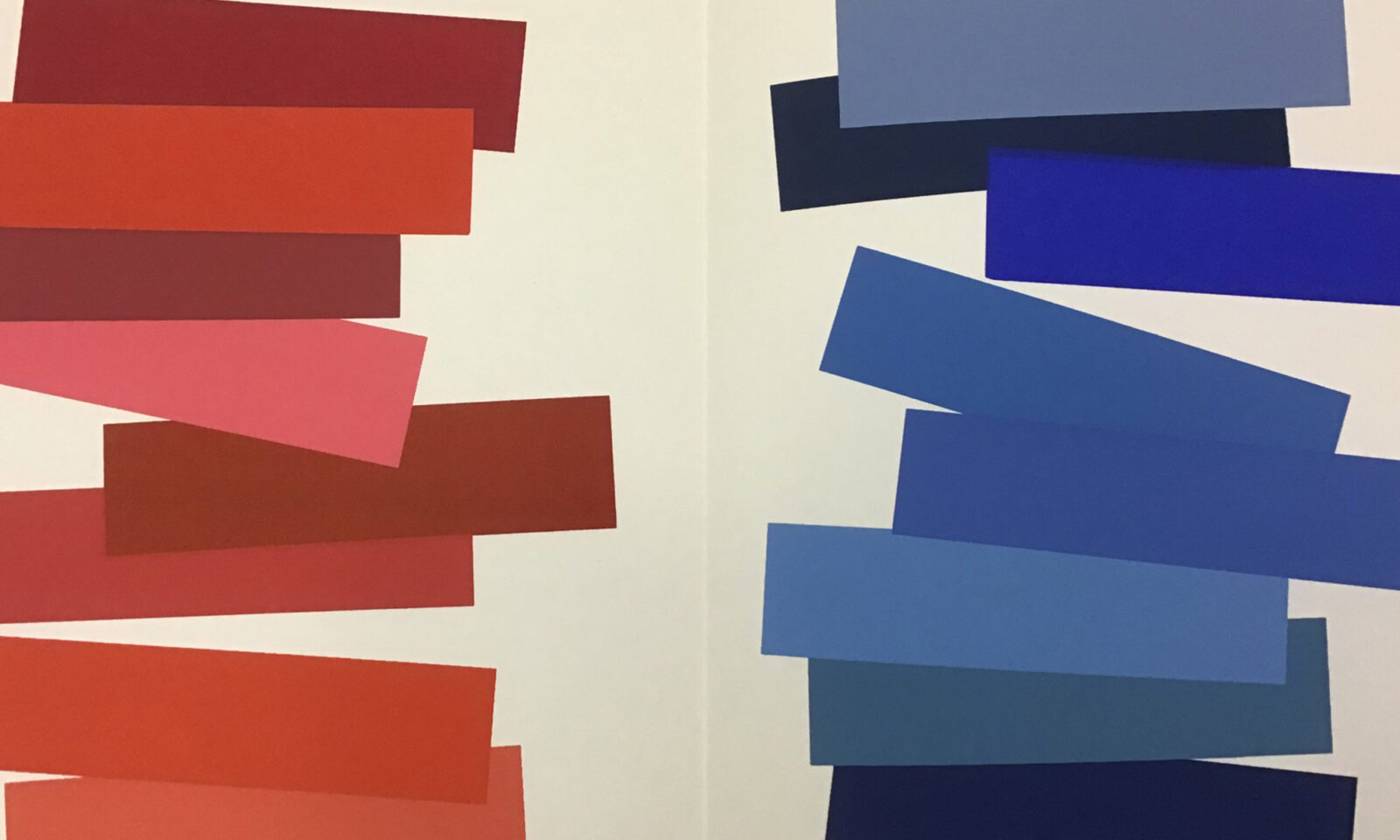 In 2012, two works from Josef Albers’ most famous series Homage to the Square were sold at Christie’s New York auction for a record $1,986,500 and $2,210,500 respectively. In 2015, Michelle Obama decorated one of the White House dining rooms with a huge tapestry designed by Annie Albers and two paintings by Joseph. The Guggenheim Museums in Bilbao and New York presented exhibitions of these artists’ works, and from May 19 to September 3, 2018, the Peggy Guggenheim Museum in Venice hosted the exhibition “Josef Albers in Mexico.” A major retrospective of Annie Albers’ works is being prepared by the Tate Gallery in London, and MoMA has begun producing and selling the Nesting table created by Josef in 1926.

Not only museums and auctions have turned to the legacy of the famous pair of artists. For interior designers, the duo, an icon of the modernist movement, have become a true source of inspiration. 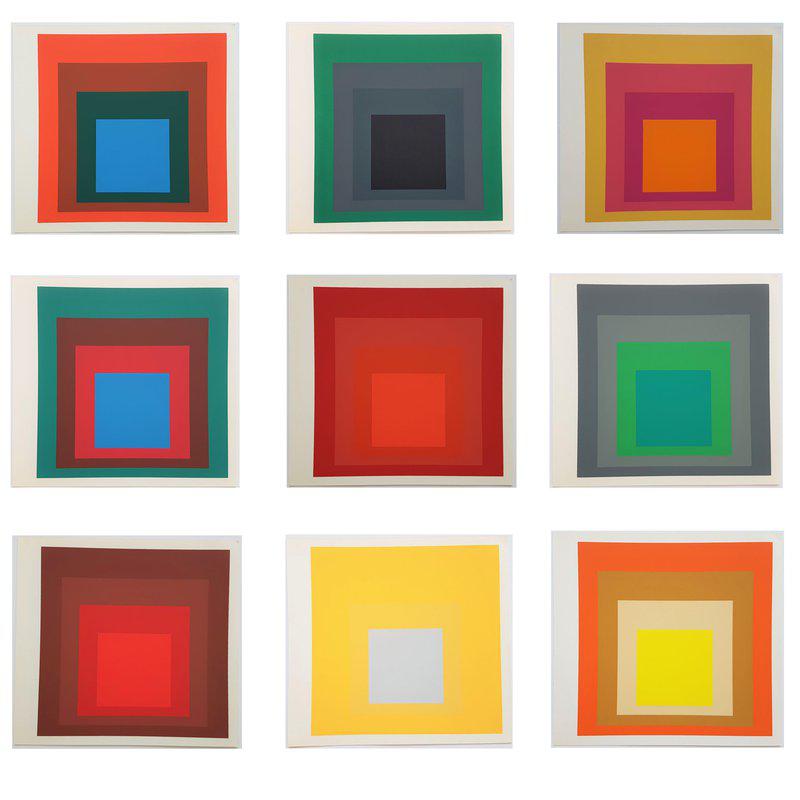 The color in Annie and Joseph’s work was the starting point for The Rug Company’s collection of rugs, home textiles and wallpaper. Its author, designer Paul Smith, is also inspired by Josef Albers’ working methods: ‘I encourage my employees to get away from the computer sometimes and draw and paint by hand. The beauty of hand painting is that you can make mistakes and thus create something unexpected and interesting. Albers created a palette of his works by trying on color combinations with the help of special color cards. The Split Light and Split Bright rugs and the Zig Zag cushions with their clear geometry and multicolored herringbone pattern were inspired by motifs from Annie Albers’ works.

Simple repeating elements are the basis of all of artist Annie Albers’ work, and the same principle has been incorporated into the design of rugs for The Rug Company and Neisha Crosland. Bamboo Trellis is handmade from Tibetan wool and silk, and the clean geometric structure is reminiscent of many of Albers’ works.

Cristopher Farr, like the Albers couple, draws inspiration for his textiles from Latin American culture. After traveling to Peru in 2014, he developed a collection of rugs, tapestries and fabrics based on Josef’s “Tribute to the Square Series” and “Meander” series. Last season, it was also updated with wallpaper and home textiles based on Annie’s designs. Cristopher Farr Cloth designers specifically visited the Josef and Anni Fondation archive to see the artists’ working methods. Thanks to this, the collection reproduces some of Anni and Josef’s drawings and sketches as accurately as possible.

If we talk about the early works of Albers, we can say that they belong to expressionism. Despite the fact that these are the first works of the artist, it should be said that they are made at a fairly high level.

The style of the young artist was influenced by Bauhaus teachers, and more specifically, L. Mohoy-Nagy – teacher of Constructivism. 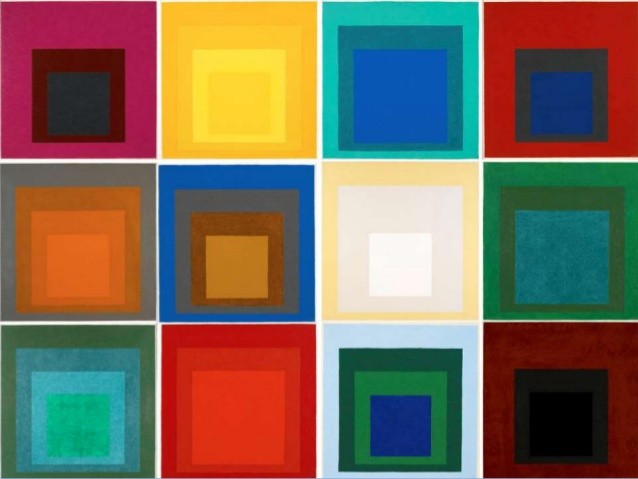 Under his influence in the drawings of Josef Albers began to appear geometric drawings, forms, lines. Already after some time it was possible to talk about the abstract-geometric style of the artist.

Albers pays great attention to color – it is the most important factor in the artist’s works. Having solved the mystery of color, how it is perceived by the human eye and which colors are best combined to achieve a particular effect, Josef continues to experiment in his works further. 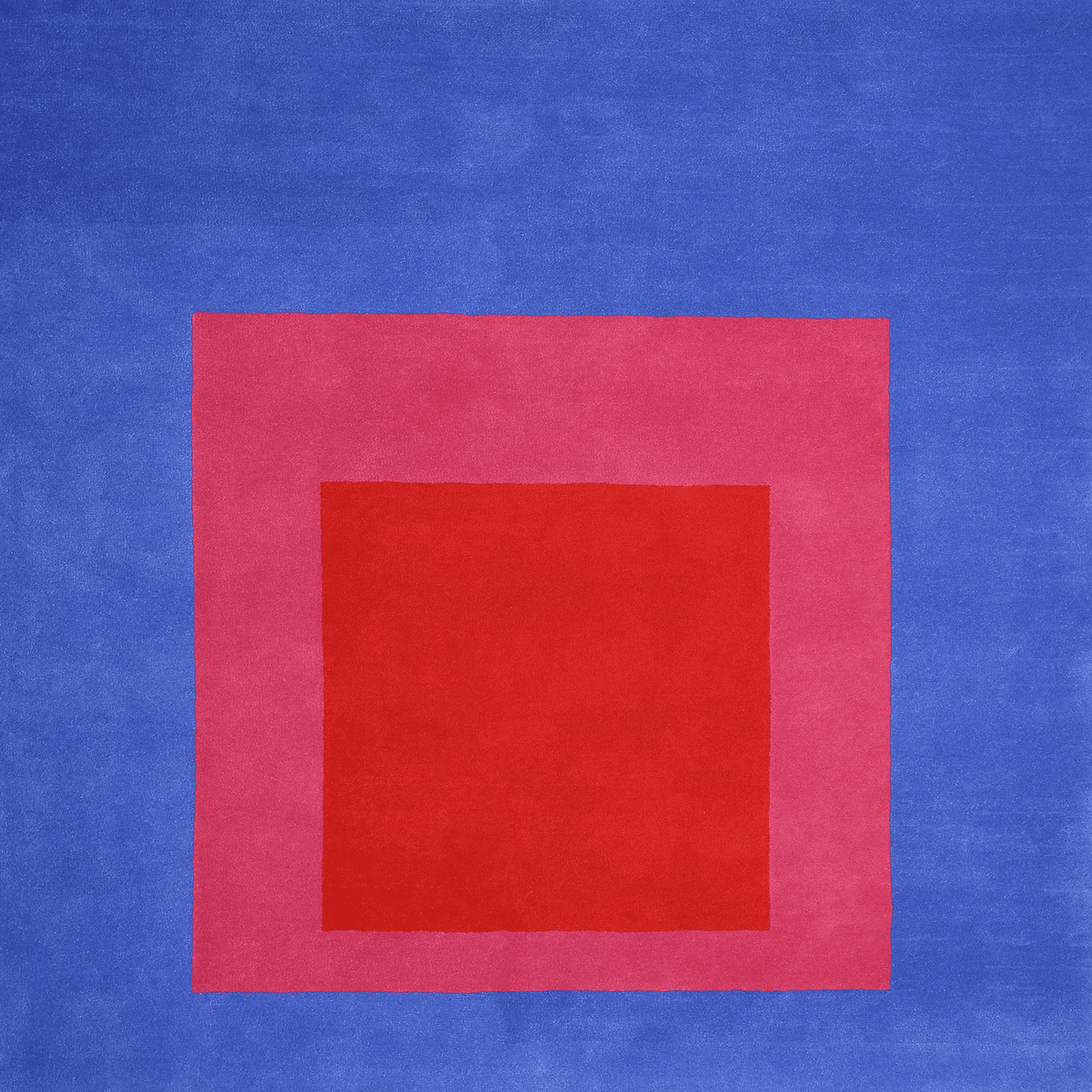 With each work, the artist’s skill grows – now he only needs one geometric grid (circles, squares, triangles) and color.

Josef Albers arranges the figures in different ways: one inside the other, overlaps one another, depicts them side by side; his figures are of different sizes and thickness.

His principles as well as the conclusions he came to are expounded by Josef Albers in his two theoretical works, one of which, “The Interaction of Colors,” has been widely disseminated. 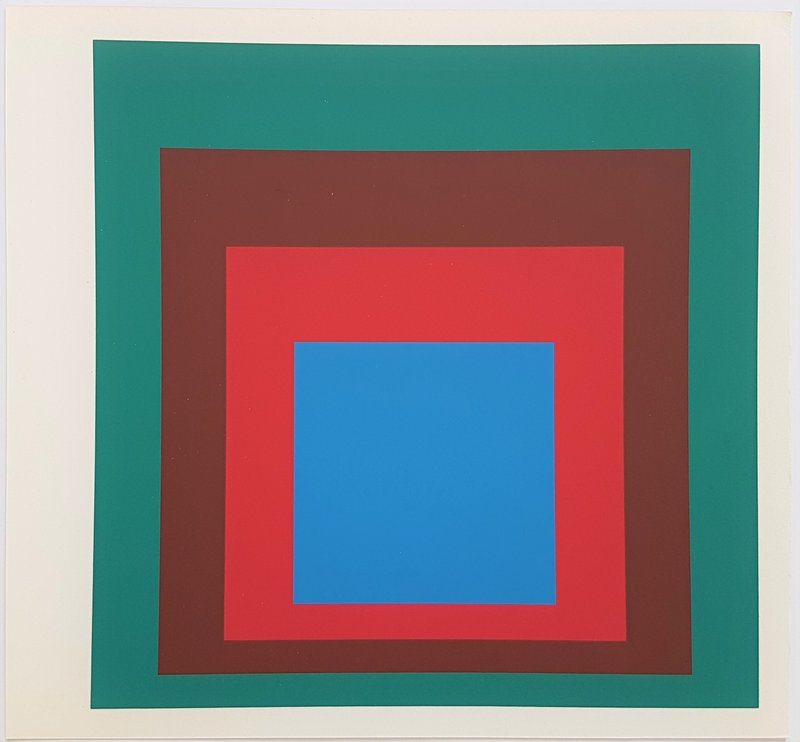 Some artists make for better clothing collaborations than others. Uniqlo’s series of Sol Lewitt fashion, with the artist’s geometric diagrams and angular patterns covering up entire T-shirts, worked particularly well: Lewitt’s Minimalist formulas could cover any surface. But the same brand’s Basquiat collaboration — not to mention the strange Brooklyn Nets uniforms inspired by the artist — clash both in composition and concept. The artist’s work feels cheapened by its slapdash reproduction. 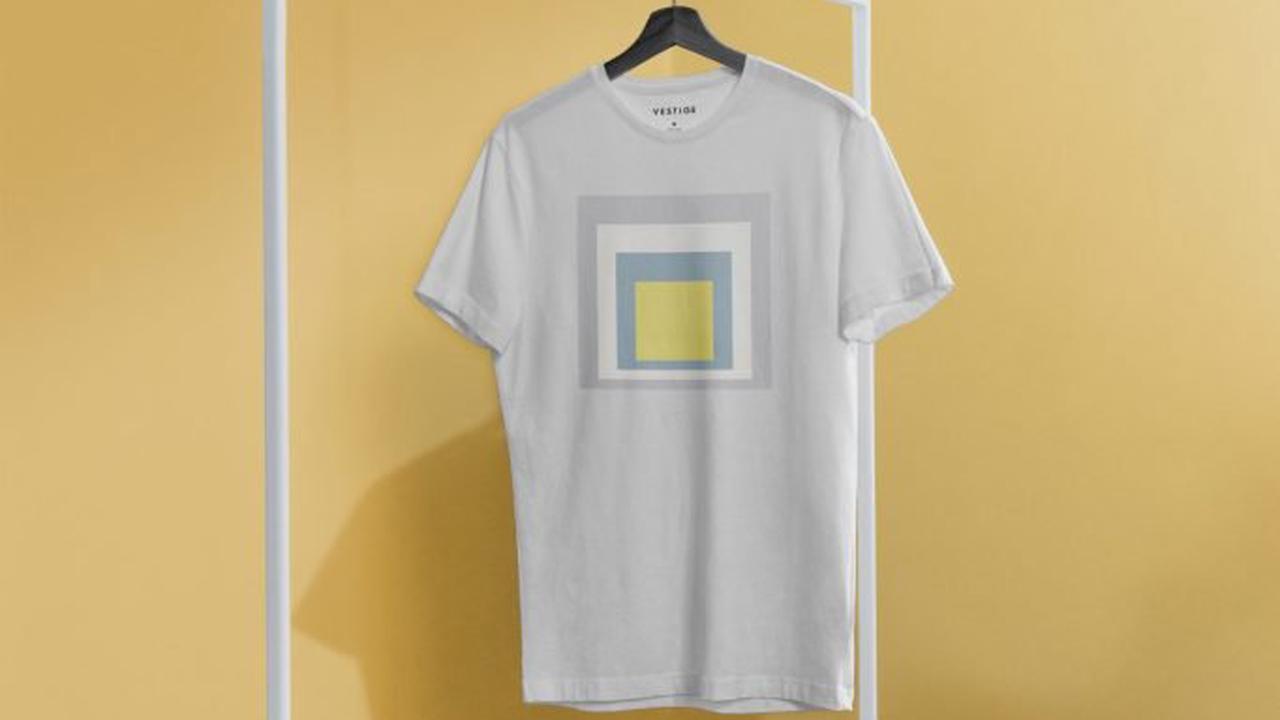 There’s no such problem with Josef Albers. The clothing company Vestige has launched a new line with the estate of Bauhaus artists Josef and Anni Albers, reproducing Josef’s work but also allowing wearers to remix his signature forms. Josef Albers is most famous for his “Homage to the Square” series that he began in 1950, with endless combinations of smaller squares inside larger squares of different colors. The works were about color theory as much as non-objective abstraction, exploring how hues vibrate against each other.

Vestige allows you to choose your own color composition for new Homage to the Square T-shirts, but it’s impossible to do better than the artist himself — maybe choose one of those. ARTnews asked Vestige’s founders Kyle Derleth and Mark DiMuzio about the origins of the project and how the manufacturing process resonates with Albers’s work.

How did the collaboration with the Albers Foundation come about? Were they immediately enthusiastic about it?

We’ve long been admirers of the work of Josef Albers. When we met Lucy Swift Weber, the director of licensing for the Albers’ foundation, we half jokingly said “We should do a collaboration!” It’s just one of those things you say when you’re excited that you don’t actually expect to happen, but Lucy was thrilled with the idea. Our style works so well with Albers’s aesthetic, and weaving it together feels like a natural merging of the contemporary and the classic.

Do Josef Albers’s ideas about color theory intersect with this concept of customizable t-shirts?

Albers’s classic composition was all about playing with color — how colors interact and make you feel when they’re next to each other in a space. Josef Albers was first a teacher and we believe a customizable “Homage to the Square” is a continuation of his desire to teach people about color and let them play in its sandbox.

How did the team design the interactive interface that allows buyers to choose their own colors?

Josef always painted from the center and worked his way out. His father taught him this technique to avoid getting paint on his shirt cuffs. Our customization walks you through the same sequence. Users start from the center square and work their way out to stay true to Josef’s art and teachings.

In addition, we worked closely with the foundation to curate color palettes based off of specific “Homage to the Square” works, such as Wide Light, Full, Day and Night and the SP series. Great care was taken to match the colors of Josef’s works digitally to produce precise colors.

A Recently Discovered Trove of Ancient Roman Coins Has Disappeared From a U.K. Museum Facility