David Zwirner announced that the gallery is representing Rirkrit Tiravanija. Gallery founder David Zwirner stated that he has been collecting his work since the early 1990s and Rirkrit Tiravanija is an old friend of his. Relationship art would not be what it is without its enormous influence, Zwirner continued.

His work is about connection, community, and shared experience. David Zwirner thinks that his art has become even more important and meaningful after the past year when there was so much disunity and disunity.

Tiravanja recreated an untitled 1990 work (pad Thai) at David Zwirner Hong Kong as part of a group exhibition that opened on 18 May. For the first time, this installation was presented over 20 years ago at the Paula Allen Gallery in New York. It shows how the artist prepares and serves noodles to visitors.

David Zvirner has shown this kind of work before. In Untitled (Free) (1992), Tiravanija occupied the office space of Gallery 303 in New York to prepare Thai curry for visitors.

David Zwirner represented an iteration of the work 14 years ago when Tiravania recreated the cramped frames of 303 Gallery’s former premises at 89 Green Street from plywood.

The work was collected by the Museum of Modern Art (MoMA), New York. The first solo exhibition of Tiravanija, presented by David Zwirner, is scheduled in Hong Kong in early 2022.

David Zwirner declined to provide details of their relationship with Tiravanija, although the gallery admitted that it does not represent him exclusively.

A happy Thai guy who cooks

The work of Riкkrit Tiravanija is difficult to attribute to what is commonly referred to as visual art. For Tiravanija, what matters is not what the viewer sees, but what happens between people. Tiravanja’s work is a stage that offers opportunities for interaction and participation. It integrates the flow of life into the museum and gallery space.

Tiravanija’s installations include reorganizing the gallery into a makeshift kitchen in which he cooks and interacts with visitors. For Rirkrit Tiravanija, art is what you eat.

The Thai artist became famous in 1992 when he created Untitled (1992), a performance during which he removed everything from Gallery 303’s Soho office and installed a homemade kitchen there, complete with refrigerator, stove, tables, and stools.

Then Tiravanija cooked a Thai curry, anyone could come and eat for free. Subsequently, Tiravania repeated this cooking as an art around the world so often that in the late 1990s it developed into a “happy Thai guy who cooks” brand.

In 1999, Tiravanija built a life-size replica of his apartment at the Gavin Brown Gallery. The installation included a working kitchen, bedroom, and bathroom and was open 24 hours a day. All summer people lived, ate and spent time there. 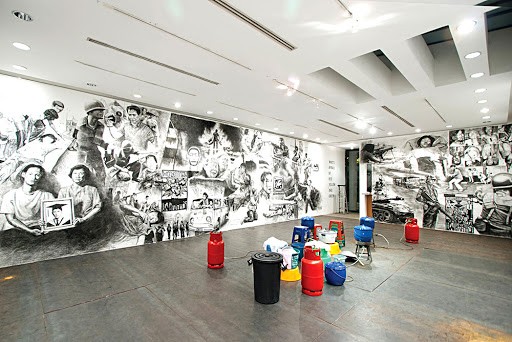 At the 2002 Liverpool Biennale, he showed Apartment 21 (Tomorrow Can Shut Up and Go Away), an installation that recreates his New York apartment with a working bathroom, kitchen, bedroom, living room, and grounds. Visitors were invited to have tea and talk.

In 2006-2007, Tiravanija was the curator of the Open City project in Vietnam.

The story of the German gallery owner David Zwirner

Today, David Zwirner has 25 years of brilliant and fruitful collaboration with many eminent artists behind him. He owes his interest in the gallery business primarily to his parents, who introduced him to the outstanding masterpieces of 20th-century art from childhood.

David’s father is Rudolf Zwirner, an influential gallery owner, undisputed authority in the art world of the 1960s, co-founder of the Art Cologne art fair in Cologne (1967), an expert at the Art Basel contemporary art fair (1970).

With the help of his father, the first David Zwirner gallery was opened on Green Street, far from the fashionable creative districts. While Zwirner Sr. specialized in Art Nouveau painters, David worked with contemporary artists.

In addition to two galleries, in Chelsea and the Upper East Side, he opened a gallery in Mayfair, London, in the former residence of the Marquise of Salisbury. By building an exhibition pavilion in Asia (Hong Kong, January 2018), Zwirner has made himself a showcase / platform for numerous and wealthy Asian collectors – mostly Chinese. Since 2013, he has had his own stand at the Art Basel fair, which has greatly expanded the gallery owner’s ability to sell the works of his artists.

Zwirner’s success was based on the combination of old and new art, as well as personal acquaintances in creative circles. Although David Zwirner gallery has become an integral part of the contemporary art landscape, he is constantly interested in emerging artists, he especially appreciates those who can create their own strong and convincing living world.

The artists, whose work he has presented in the last five years in his gallery, has since then held 247 solo exhibitions in 40 countries.

The Platform: New York project, which is 12 separate online galleries united into a single digital space based on the online space of the David Zwirner Gallery in New York, began its work last year during quarantine.

Unlike many other similar projects, Platform: New York was created to support small art galleries forced to close their showrooms to the public due to the spread of the COVID-19 virus. The platform gives them full autonomy in the disposal of proceeds from the sale of works art means and does not take a commission for the transaction. Posting on the platform’s website is also free. According to the terms of the project, each of the participating galleries placed several works by the same author in the space allotted to it.

It is worth noting that David Zwirner is actively involved in charitable activities. For example, in 2011, Zwirner, together with artist and director Ben Stiller, organized the ‘Artists For Haiti’ campaign, which raised more than $ 13 million for children’s health and education programs.