Home News Designer and Artist Christian Louboutin Is Taking His ‘L’Exhibition’ Show on the... 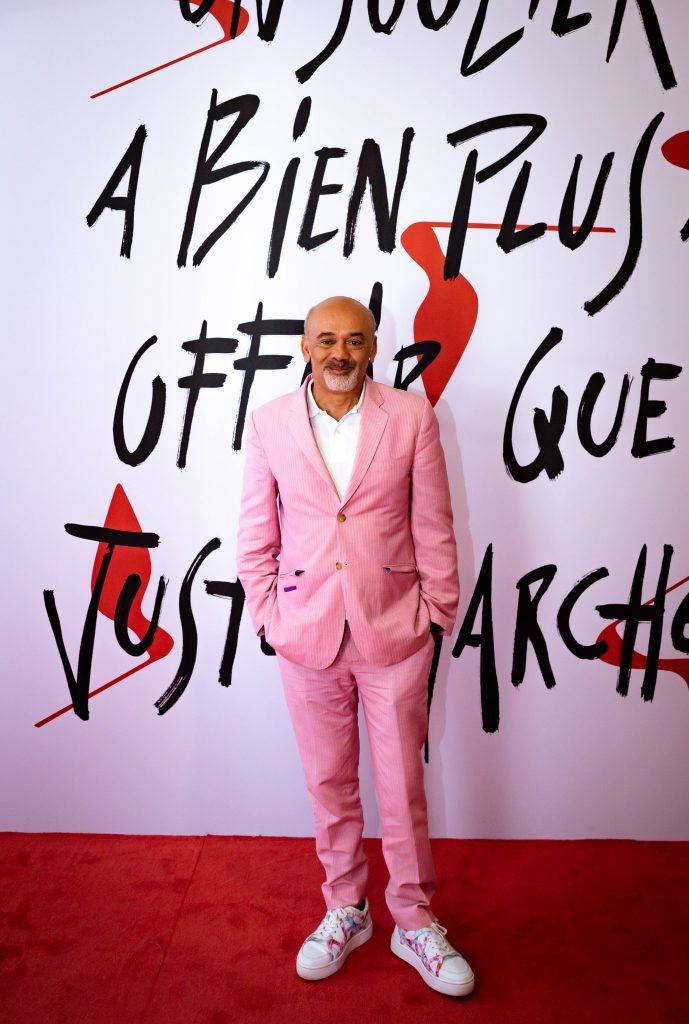 One July afternoon, Christian Louboutin was doing media interviews in a quiet corner of Monaco’s Grimaldi Forum, just hours before unveiling an important chapter of his journey as a shoe designer and an applied artist. Dressed in a flamingo suit for the occasion, Louboutin was about to greet fashion lovers, celebrities, and members of the Monaco royal family who graced the red carpet for the opening of his solo show “L’Exhibition[iste], Chapter II.”

It is, essentially, a sequel to the exhibition of his work that took place at the Palais de la Porte Dorée in Paris nearly two years ago. This new chapter is not a mere repeat, however. It is much bigger, both in terms of size and ambition, and more truthful to his original vision for the exhibition, the designer said. It has also been recontextualized for the French Riviera. 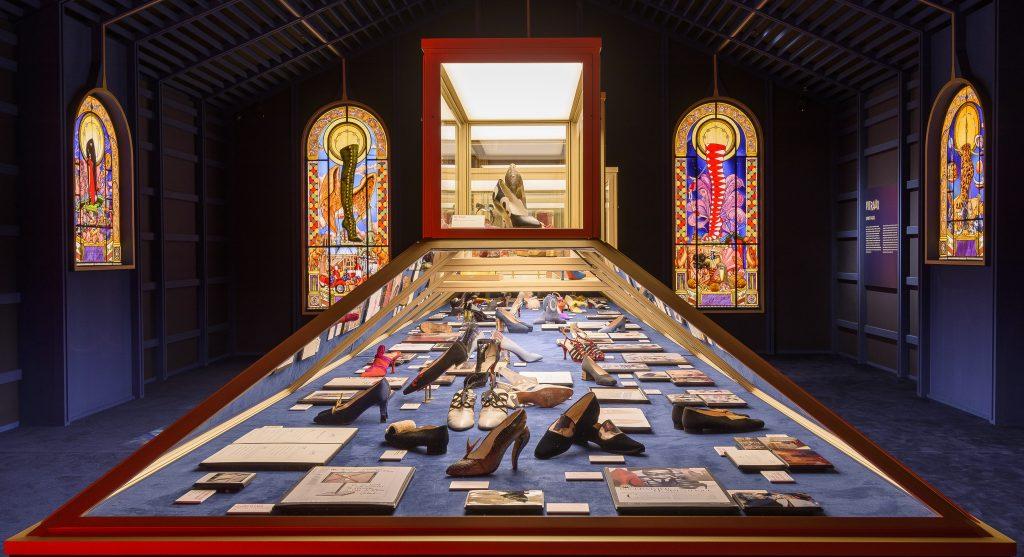 There have been other glamorous shows featuring Louboutin’s iconic red-soled shoes, some 300 of which he has designed over the past three decades, but “L’Exhibition[iste], Chapter II” is much more than a retrospective, the designer said. It is, rather, a show that investigates and maps out Louboutin’s varied influences through a curation of works, while displaying his latest art collaborations as well as pieces on loan from institutions in Monaco.

“We did it the way I really wanted it to be,” Louboutin told Artnet News. The vast space and flexibility offered by Grimaldi Forum, which has long been a major exhibition venue in Monaco, have given Louboutin as well as the show’s curator, Olivier Gabet, director of Musée des Arts Décoratifs in Paris, the freedom to redesign the exhibition as they envisioned it, without the constraints they faced when mounting the Paris show.

“Here, there’s no limit of height, no limit of space in general, which is very, very, very nice,” the 59-year-old designer said. The exhibition spans more than 21,000 square feet. “We have also been helped by the incredibly nice people of Monaco. The entire Principality opened their doors—to their collections, to the storage of their museums. I’ve been able to [borrow] really great pieces.” 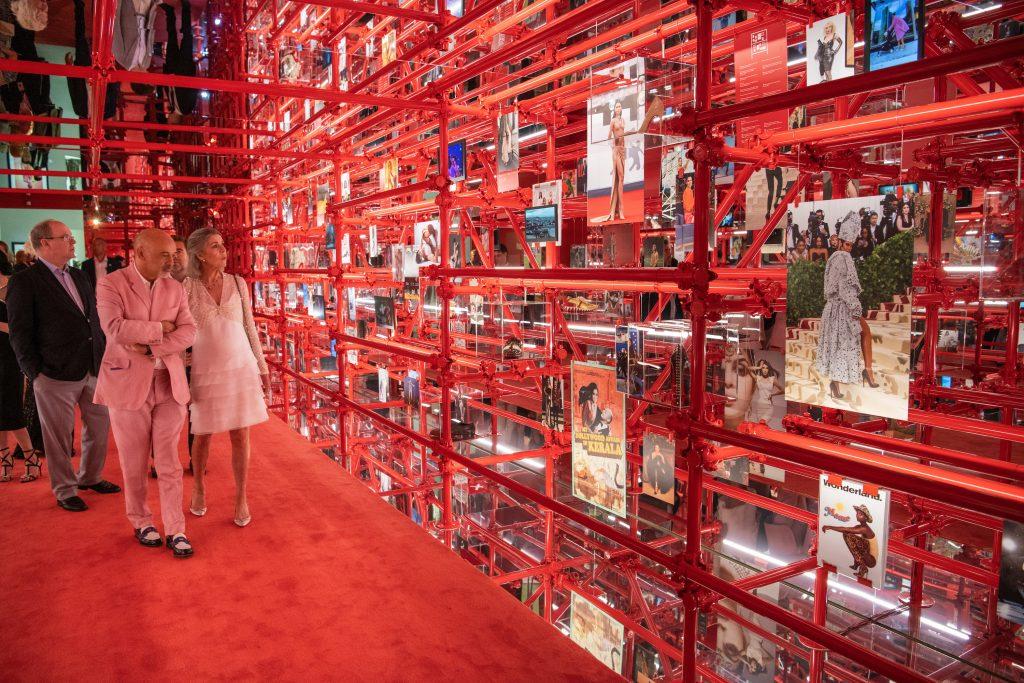 Staging the exhibition in Monaco was not a random decision. Paris might be where Louboutin was born and raised, and where he opened his first boutique in 1991 on Jean-Jacques Rousseau Street, after learning the crafts of shoemaking and shoe design from the likes of Roger Vivier and Charles Jordan.

But it was Monaco that gave him a major career boost: Princess Caroline (now officially Her Royal Highness Princess of Hanover) walked into Louboutin’s Paris boutique just a few months after it opened, bought several pairs of his shoes, and became one of his most loyal customers. The princess’s shoe shopping was revealed by the press, which led buyers from American department stores to go knocking on the doors of Louboutin’s maison.

Naturally, the princess was a special guest at the exhibition’s opening, along with her brother H.S.H. Prince Albert II. “Apart from being a person I regard as one of my fairy godmothers, she has truly become a friend,” said Louboutin, who gave them a personal tour of the exhibition.

It is divided into 14 rooms that connect thematically, each with a unique soundtrack to help immerse visitors in the world of Louboutin. Tchaikovsky’s plays in the first room, with its wall of shoe lasts immersed in red light. And old radio broadcasts accompany a display of some of his earliest designs and sketches, including those preceding his most iconic shoes, which were born in 1992 when the designer took his assistant’s nail polish and painted the sole of a prototype red.

One room is dedicated to Louboutin’s Nudes series—shoes designed to match skin tones of all types—accompanied by nine leather-clad sculptures by British duo Whitaker & Malem, commissioned by the designer himself. There’s also a “Hall of Treasure” spotlighting Louboutin designs that draw inspiration from around the globe, including the Lady Grès shoe that pays tribute to Madame Grès’s turbans and pleats; styles referencing art from Africa, Oceania, and America; and sculptural pieces (not made for walking) inspired by sea creatures—a nod to the Aquarium at the Palais de la Porte Dorée in Paris, which Louboutin frequented as a child. 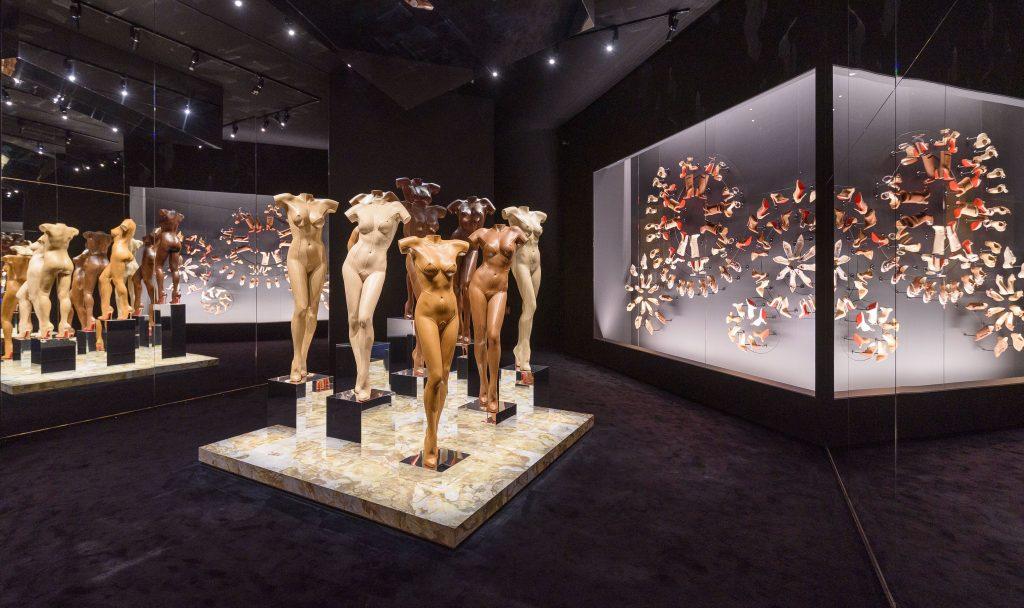 Louboutin wanted the audience to experience more than his marvelous designs. “Okay, we talk about the shoes, but as you see, overall, the exhibition does not feature so many shoes—a lot of the exhibition space is devoted to artists such as Allen Jones and Lisa Reihana,” said Gabet. “Christian, as a young guy, was very close to the museum where chapter one [of the exhibition] took place. For him, it’s important to show the power of transformation of art, and the way that museums, and the discovery of art, can change your life.”

Louboutin dedicated a space to New Zealand artist Reihana, whom he met at the Venice Biennale in 2017, and whom he asked to create a new, monumental digital work titled , in which the artist traces the designer’s creative journey. 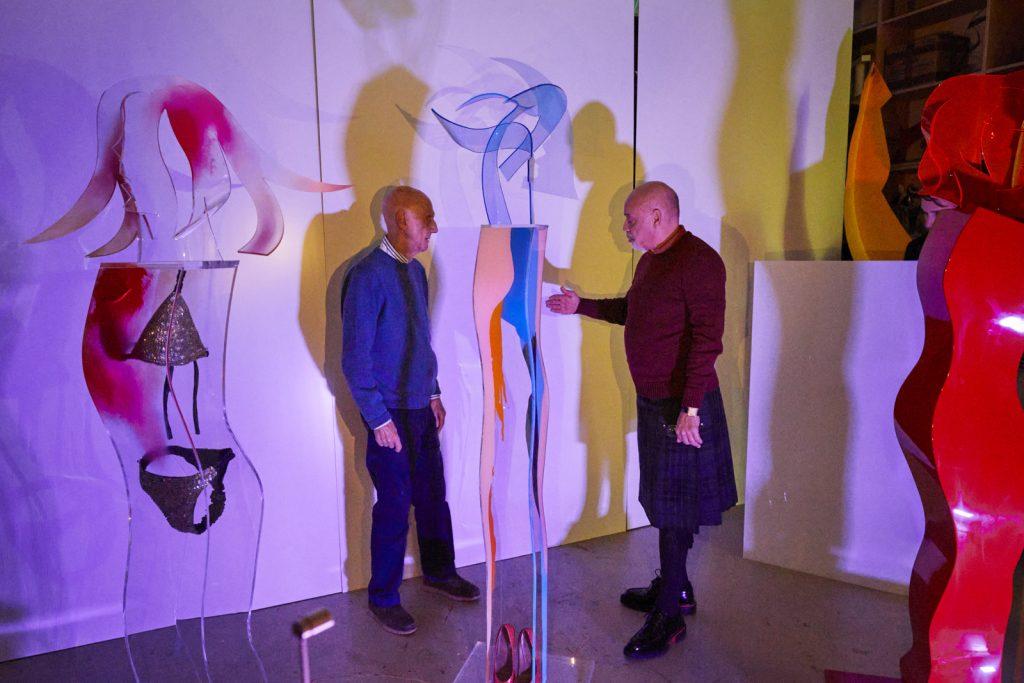 Meanwhile, the room “All(en) in Wonderland” is the outcome of a discussion that Louboutin had with Jones nearly two years ago, after he invited the British artist to see his Paris show. It features , a new body of work that renders a digital take on Jones’s iconic piece from 2013, projected onto a 36-foot-long screen. It is displayed alongside five of his once-controversial sculptures referencing the female body, and their accompanied shadow play.

In the “Imaginary Museum,” objects from Louboutin’s personal collection (say, a ca.-200 Egyptian mummy foot case) sit beside items that he and his curatorial team handpicked from local institutions. You’ll find, for example, a blue silk taffeta headdress designed by André Levasseur, on loan from the Nouveau Musée National de Monaco. The piece was worn by Josephine Baker, the American-born French singer and dancer who was also a spy for the allies during WWII, while performing at the Sporting d’Été in Monte-Carlo in 1974. It is how Louboutin came to love feathers. 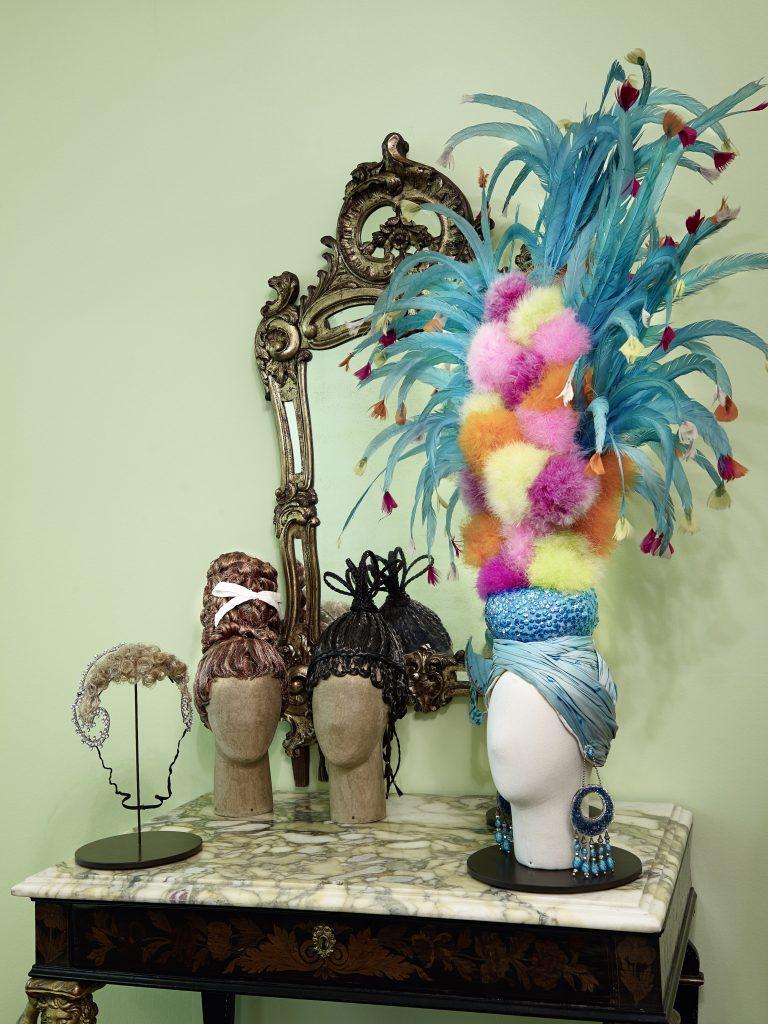 When the designer first opened his Paris shop, he decorated it with a photograph of chickens, despite a friend’s note of caution. “Her mother said it was an offense to women to have chickens in a shoe store,” Louboutin recalled. He disagreed and refused to remove the image, though it took him some years to realize why he was so fond of it. “To me it was not a representation of women. I liked the chickens because I liked feathers.” He added that they are linked to his passion for showgirls such as Baker, whom he sees as artists.

André Derain’s 1926 set-design model for , a one-act ballet by Éric Satie for the Ballets Russes (also from the Nouveau Musée National de Monaco), and Ernst Haeckel’s lithographic plates detailing the study of sea creatures from Monaco’s Musée Océanographique, which Louboutin visited as a child, serve to map the designer’s influences as well. 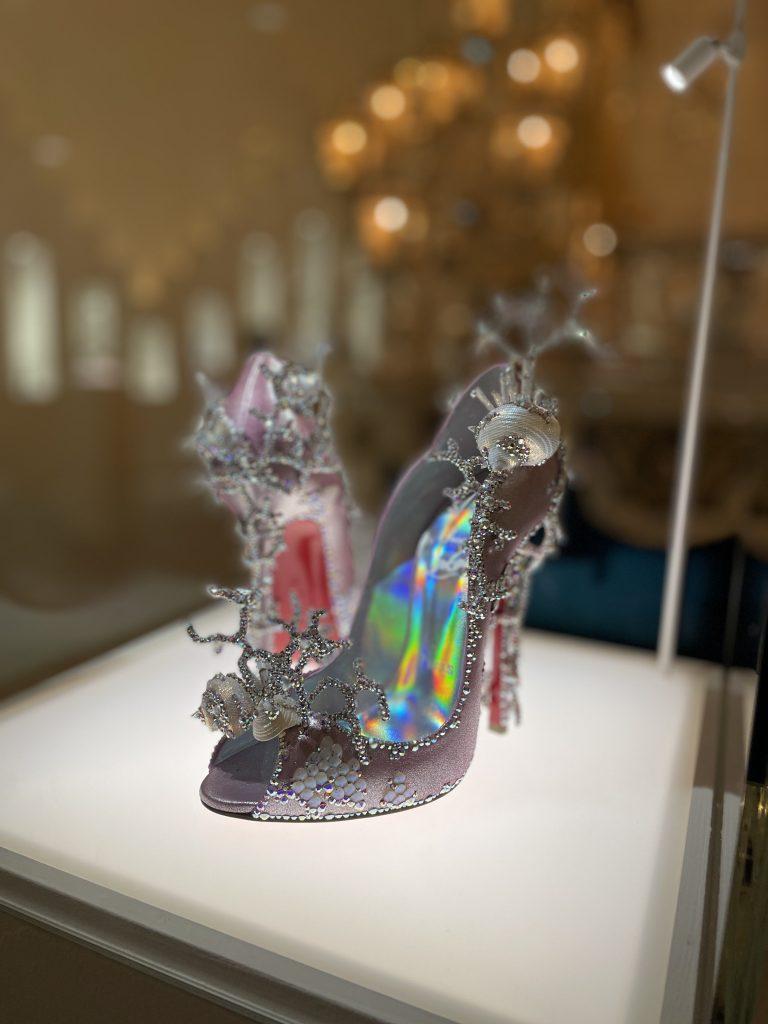 “I’ve always liked fish scales, or fish that are silver,” Louboutin noted. “If you don’t know me, you wouldn’t necessarily see or imagine that. But then when you put all the puzzle pieces together, it’s pretty coherent. It was a bit of a shock for me [to see these influences] have been going on for a long time.”

Louboutin may, in the future, discover more about himself and his influences as the exhibition travels and is reimagined for new locations. There are plans to stage it in China (Shanghai, Chengdu, and Beijing) in 2024. It may go to Australia and North America, too.

Louboutin said he has no interest in parachuting into different destinations and imposing his show—rather, creating future chapters for local contexts is important to him. “I want to take time in each place, actually look around, work with the people there,” he said.