Home News Who Was the Marquise de Grollier? A Work by the 18th-Century Woman... 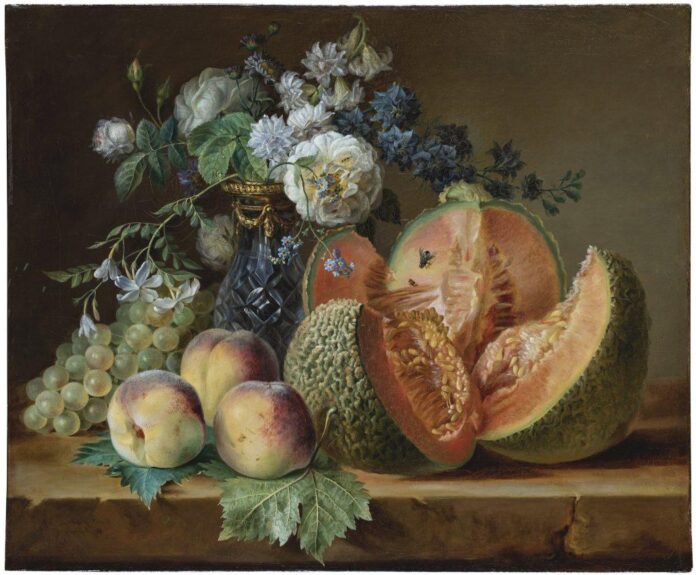 The Metropolitan Museum of Art in New York recently acquired a rare painting by one of France’s most celebrated—though largely forgotten—female painters.

The oil on canvas still-life by Charlotte Eustache Sophie de Faligny Damas, also known as the Marquise de Grollier, who was once dubbed the “Raphael of flower painting” by the Italian sculptor Antonio Canova, depicts a vase of lush flowers alongside a cut-open melon, several peaches and grapes on a stone surface.

The acquisition is part of a new initiative at the Met to expand the narratives told in its European paintings galleries. “Grollier’s painting offers a kind of connective tissue between key works in The Met’s collection—Vallayer-Coster’s still-life of the same year and Vigée Lebrun’s spirited portrait of Grollier’s longtime companion, Crussol,” said David Pullins, associate curator of European paintings at the Met, in an email sent to Artnet News. He added that the work “fills out an important aspect of the 18th-century art world and the museum’s holdings in early modern still-life.”

Grollier was born in Paris in 1741 and displayed a talent for drawing, receiving lessons from the acclaimed court painters and Dutch émigré artist Gérard van Spaendonck. In 1760, she married the nobleman Pierre Louis de Grollier. When he was killed by guillotine during the French Revolution in 1793, she was forced into exile, bouncing between Switzerland and Germany, before finally settling in Italy, in Florence and Rome.

The director of the French Academy of Painting and Sculpture in Paris eventually arranged for her to return to France after the Revolution, where she took up residence at the château in Épinay-sur-Seine. There, she would continue to practice painting as well as horticulture until her death in 1828, at the age of 86.

Due to her status as a noblewoman, Grollier did not exhibit or sell her art during her own lifetime. However, she became a respected painter and counted among her friends fellow artist Elisabeth Louise Vigée Le Brun, who immortalized her in a portrait in 1788.

While it is unknown precisely how many of her works are in existence, what is known is that almost all of them were given to her immediate family. The Met’s recent acquisition, Still Life with a Vase of Flowers, Melon, Peaches, and Grapes, was painted in 1780, and was initially bequeathed to Grollier’s daughter. It subsequently moved through the family until being sold via Galerie Canesso in Paris in 2021.

There is also some evidence, according to a representative for the Met, that she gave some artworks as gifts to those in her immediate social circle, including the Empress Josephine. The only other known work of Grollier’s in a museum collection is a still-life in the Los Angeles County Museum.

The Met’s new acquisition is set to go on display in 2023, when the museum completes its Skylights Project renovation, which will bring natural light back into the space.