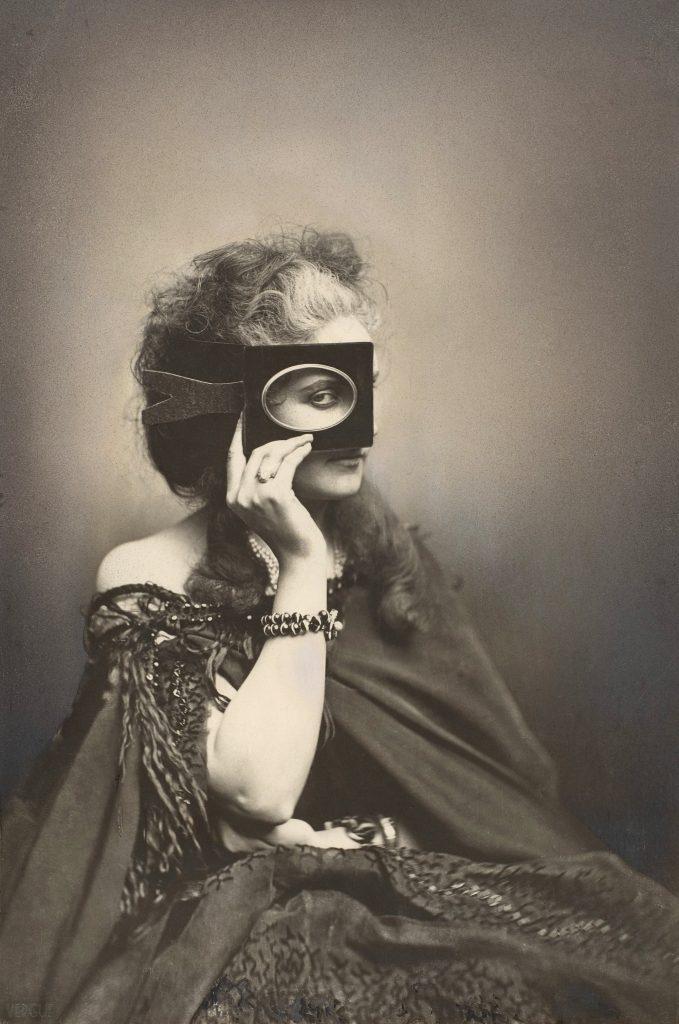 The Countess of Castiglione, a ravishing Italian aristocrat living in 19th-century Paris, both captivated and scandalized the French court. In the 1850s, she was known as the most beautiful woman in the world and became, notoriously, the mistress of Emperor Napoleon III. But, in spite of her celebrity, it was the countess’s private passion that would define her as one of the most indelible figures in the history of photography. Over the course of four decades, Castiglione created over 400 stylized, costumed self-portraits which reimagined the possibilities of the medium.

Born Virginia Oldoïni to an aristocratic family in the Northern Italian city of La Spezia in ​​1837, she was married, albeit lovelessly, to Count Francesco Verasis da Castiglione at just 17. Her life’s course would forever alter when, in 1856, Castiglione was dispatched to Paris at the behest of her cousin, the government official Camillo di Cavour, to buoy support for the Italian unification campaign in France.

In the City of Light, she discovered the world of portrait studios, and in the summer of 1856, she visited the sought-after studio of Mayer & Pierson for the first time. Here, over the next three decades, she would create hundreds of photographic self-portraits, variously ranging from decadent to outright bizarre, in collaboration with owner Pierre-Louis Pierson. While Castiglione shared some of these images with lovers and friends as photographs—small albumen prints, then popularly exchanged via mail and collected almost as calling cards—she kept many more privately, simply for her own eyes.

Now, the public will have the chance to see more than 50 of these private images for the first time. London’s James Hyman Gallery is presenting “The Creation of a Legend,” the very first London exhibition of photographs of the countess. The exhibition brings together dozens of images from across decades, and offers a fascinating and at times distressing narrative of Castiglione’s transformation from a ravishing beauty to one worn and ravaged by the passages of time.

“She goes from a celebrity of wealth to losing her money and aging. In the 1850s, there was a fetishizing thing going on about her. Her feet were meant to be incredibly beautiful, and there were photographs—including one in the show—that were just close-ups of her feet,” Hyman noted with amusement. 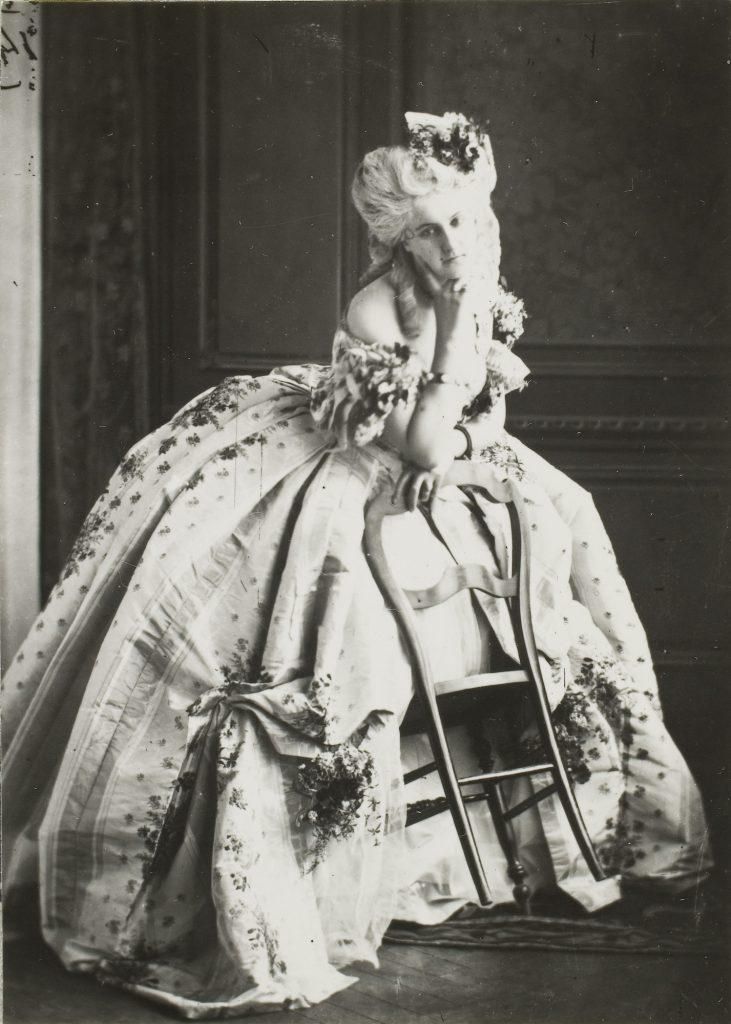 The exhibition is divided into three periods. After her glorious Parisian entrée, by 1858, Castiglione was deeply indebted and estranged from her husband and returned to Italy. Three years later, in 1861, she returned to Paris and attempted to rekindle something of her former glory, to varied success. In images from this period, Castiglione transforms herself into assorted marvelous characters, at times playing roles from literature and theater that she’d note onto the photographs themselves. Other times, she acted out visions culled purely from her own imagination.

Although Pierson closed the shutter, Hyman emphasizes that Castiglione was a conscious creator—she directed the images with incredible detail, from costuming and posing to choosing camera angles and printing formats. She also gave instructions for the hand painting of her photographs (at times even adorning the works with color herself).

“The Creation of a Legend” includes two previously unknown, and very rare, hand-colored painted portraits of Castiglione. One image, La Sultane (1865), is juxtaposed with another black-and-white photograph of her in the same pose, offering a fascinating juxtaposition. 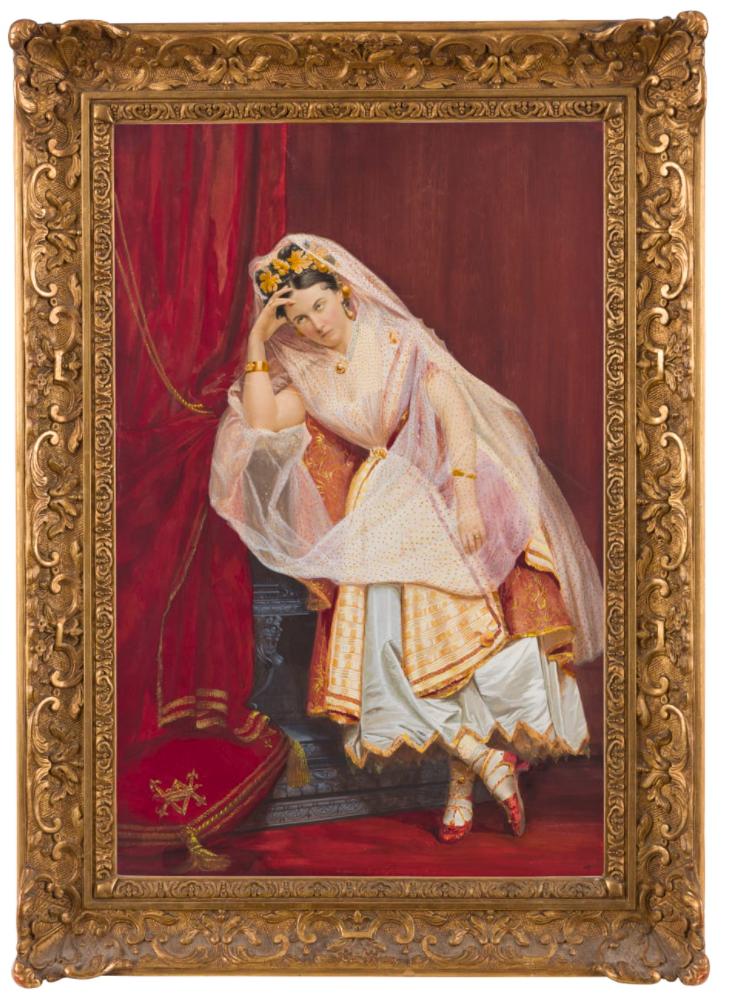 Following the fall of the Second Empire in 1870, Castiglione stepped away from the camera for nearly 25 years. Her life became increasingly reclusive and unusual, and she was said to venture out only at night. In the 1890s, Castiglione suddenly reappeared at the studio of Mayer & Pierson, resuming her portrait practice. The exhibition at James Hyman includes a number of images from these years, which are often startling to behold as countess receded into mental illness. These late portraits reveal stark, even bizarre visions—her famous shock of hair, filled not with jewels but with twigs, her once penetrating gaze turned starkly vacant. She died on November 28, 1899, at just 62 years old.

“You can chart her from her great glories to her decline. Though she died in her early 60s, in those last years, she appears shockingly ancient,” said Hyman. 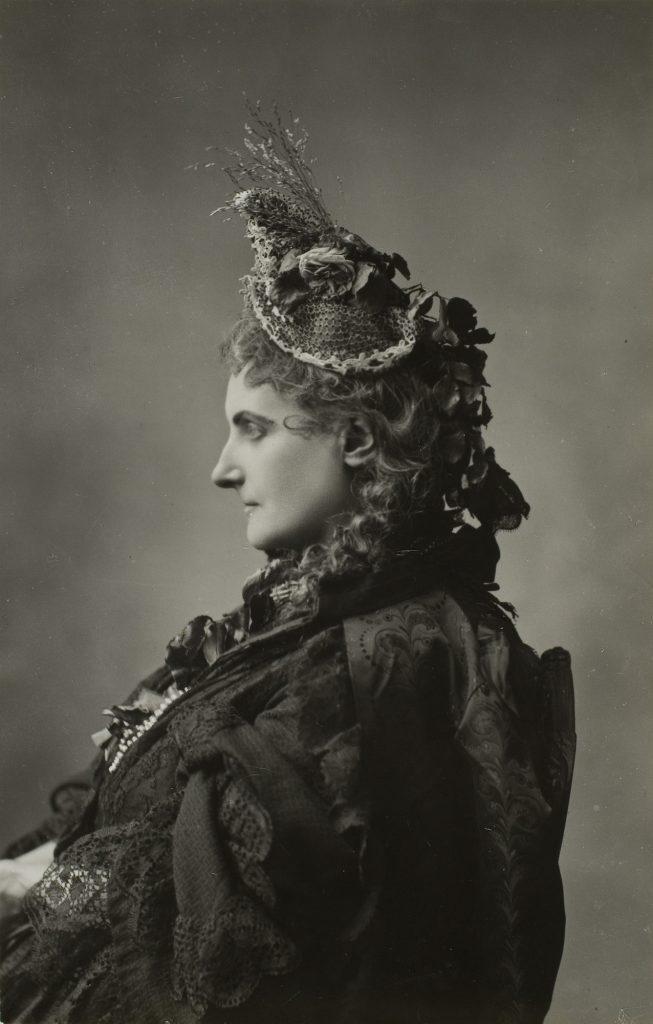 Since her death, the curious saga of the countess’s life has been heralded by a niche group of acolytes, some almost obsessive in their devotion. Most famously, the French Symbolist poet Robert de Montesquiou, who feverishly collected her photographs (his holdings now belong to the Metropolitan Museum of Art) and spent over a decade penning La Divine Comtesse, his 1913 biography of Castiglione.

Hyman hopes that the time for a larger audience to embrace her vision. “What’s so interesting about her, and so very contemporary, is that she was photographing or having herself photographed again and again and again. It reminds me of Instagram or artists or celebrities who have become famous for manipulating their images,” he said. “The countess is in, in some ways, a 19th-century Cindy Sherman.”