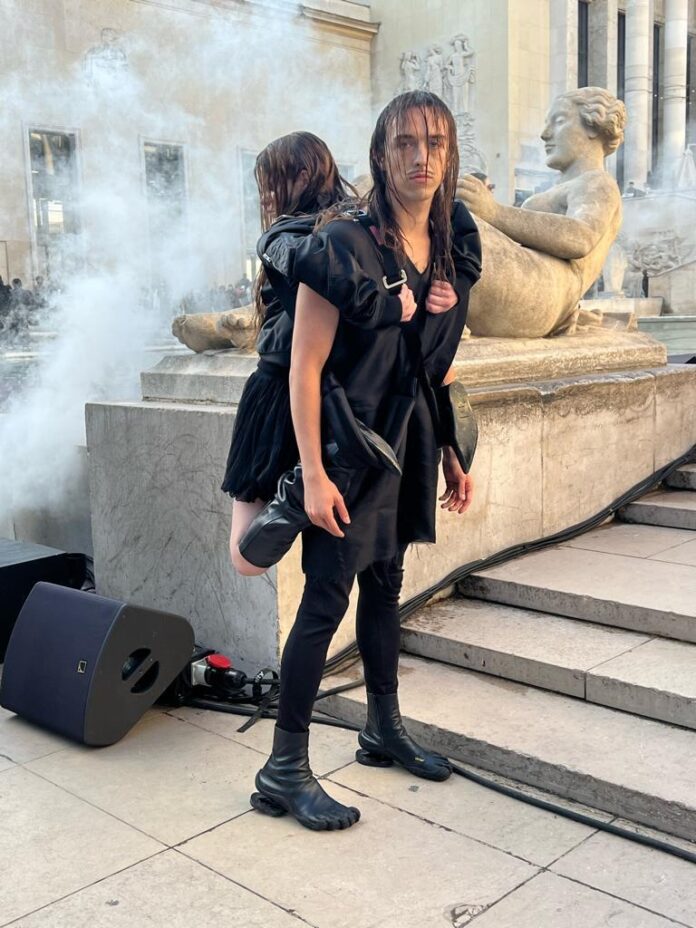 Born Tomas Tammemets in November 1991, the Estonian rapper and singer Tommy Cash, a.k.a Kanye East, is known for spitting rhymes that deliver uncanny depictions of post-Soviet life. His music combines cloud rap, hard dance, and Baltic beats with high and low culture references (“Gopnik in the streets, Dostoyevsky in the sheets,” he sings in the track ), including plenty of art references. His viral video for the song was inspired by a trip to the Louvre, featuring Cash surrounded by dancers who contort themselves into pyramids, landscapes, musical instruments, even a throne.

Like his music, Cash himself is not so easy to define. He moves effortlessly from collaborations with Diplo and Boys Noize to genre-defying, gender-fluid live performances (think Peaches meets IC3PEAK meets Wu Tsang) to designing streetwear inspired by the bootleg Adidas sold at 1990s mega bazaars of the Baltic region. Following his sophomore album, “¥€$,” which features industry majors like Charli XCX and Caroline Polachek, he is now working with brands such as Maison Margiela and Rick Owens.

“Whether in art, fashion, music, or design, everything I do is inspired by the Tommy Cash way of being,” he told me last spring while sporting a kilt with a grey tank top atop Spain’s Catalonia Barcelona Plaza hotel. “I don’t see the difference between creating an Ikea sofa and using my music to reach the world. It’s a cluster fuck, yeah—but it works.”

The Tommy Cash way of being, for what it’s worth, is a bit like a box of chocolates—you never know what you’re gonna get. He’s just as likely to make his next appearance at a (a grim Soviet apartment block) as he is at a couture show. Earlier this month, Cash turned up sporting a paparazzi-style camera at Balenciaga’s spring-summer 2023 Paris Fashion Week presentation, which saw his Western nickname-sake walk down a mud-covered runway designed by artist Santiago Sierra. 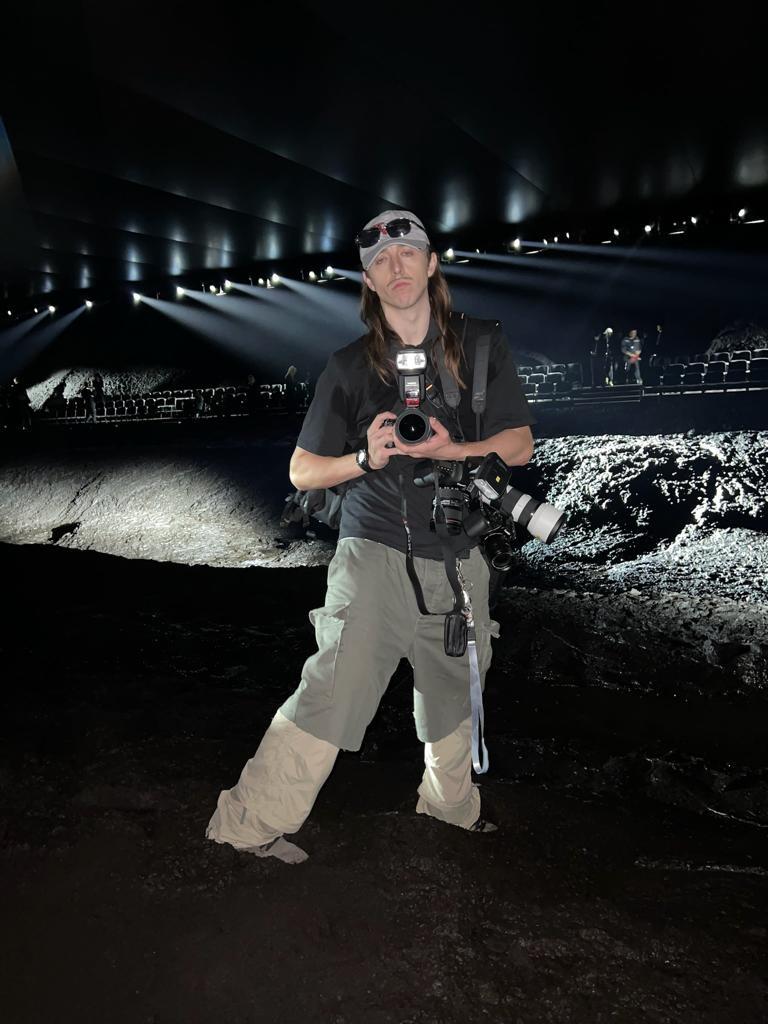 Sipping water a few hours before he was to take the stage at Sónar, Cash relayed to me the trajectory of his life and career, and how growing up in the slums of Estonia with a “mash up of Estonian, Russian, and Ukrainian ancestry” has shaped his identity. Most of all, he feels that when it comes to making art for a wide audience, it’s important to stay true to your roots—and he seems hell-bent on blinging up the hoods of Eastern Europe and beyond.

The hip-hop star has much in common with his Western counterpart: “When I grew up, I dropped out of school because everyone was lame as fuck,” he said. “I realized pretty early that society’s expectations were nowhere near my own.

“I never cared what anyone thought about me, whether it was how I looked or performed,” he continued. “So I just took that vibe and ran.” 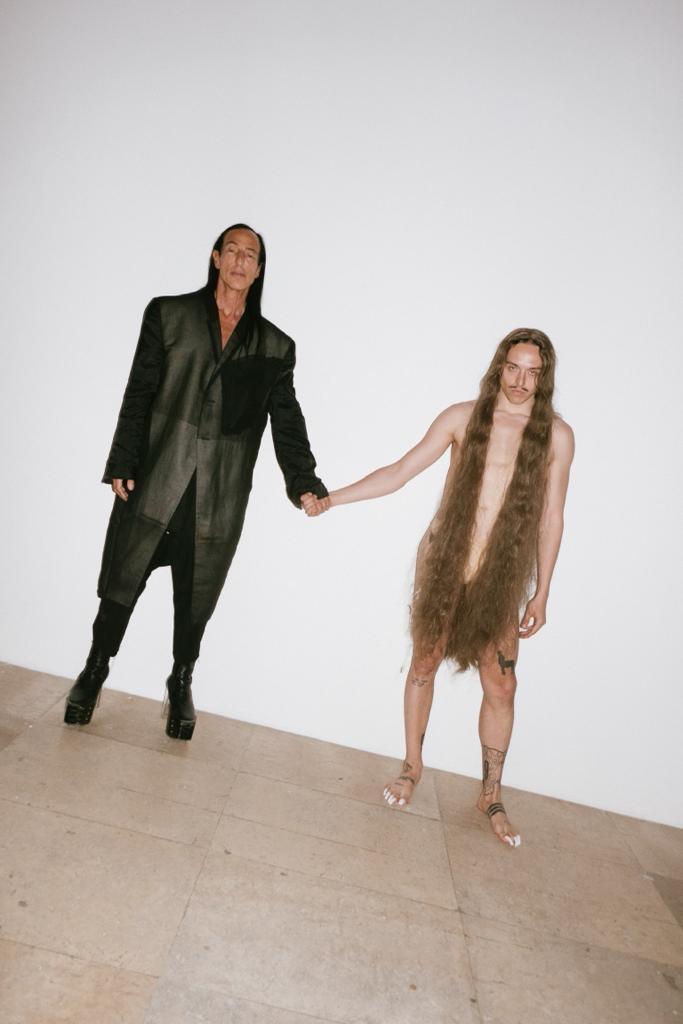 Indeed: In June, he showed up for the Rick Owens spring-summer 2023 Men’s Paris Fashion Week show completely naked, save for the thigh-length hair covering his genitals. Previously, Cash and Owens collaborated on a series of projects, from the 2018 track  to the 2019 exhibition “The Pure and The Damned” at Kumu Art Museum in Estonia, where Cash exhibited, among other things, his own sperm.

Now, he is presenting a solo show at Paris Internationale with Temnikova & Kasela (until October 23), a gallery from Tallinn that also represents artists like Katja Novitskova, Kaarel Kurismaa, Nik Kosmas, and Kris Lemsalu.

“Tommy’s work contributes to one of the most valuable cultural discourses of our time,” his gallerist, Olga Temnikova, told Artnet News. “If you look at the situation in Ukraine today, the breakdown of communication, the linguistic and ethnic lines dividing the conflict, he transcends these worlds in a way that feels fresh and poignant.” 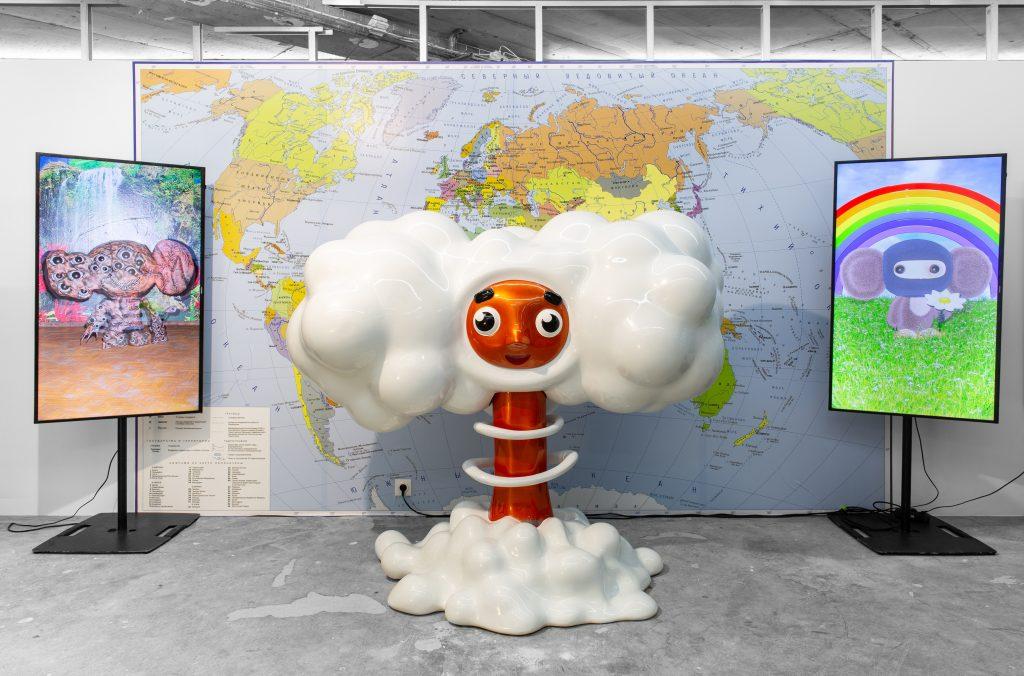 A view of the Tommy Cash installation at Paris Internationale, 2022. Courtesy of Temnikova & Kasela.

The booth is set up as a dark and strange tribute to a popular Russian cartoon, Cheburashka—a cute furry animal popular in many post-Soviet countries. On display are large and small versions of Cash’s “Nukerashka” sculpture (retailing from €2,500, or $2,440, to €45,000, or $43,980), featuring a smiling, totem-like Cheburashka that has nuclear clouds billowing out from its ears. With Europe on the brink of nuclear war, the sculpture, set against a map of the world, feels potently ominous.

“Nukerashka” hoodies are also on offer for €200 each, with twenty five percent of the proceeds going to the the Ukrainian Cultural Center, an NGO that supports people who have been displaced and who are close to the frontline in Ukraine.

“Tommy has reached hundreds of millions of people worldwide with his distinctive visual style, absurdist imagery, and depraved sense of humor,” Temnikova said. “He speaks the language of a pan-Slavic hip-hop folk hero.”

Is it art? Who cares. It’s Cash’s world, we’re all just living in it.