Home News Elaine de Kooning Never Got Her Due in Her Lifetime. So How... 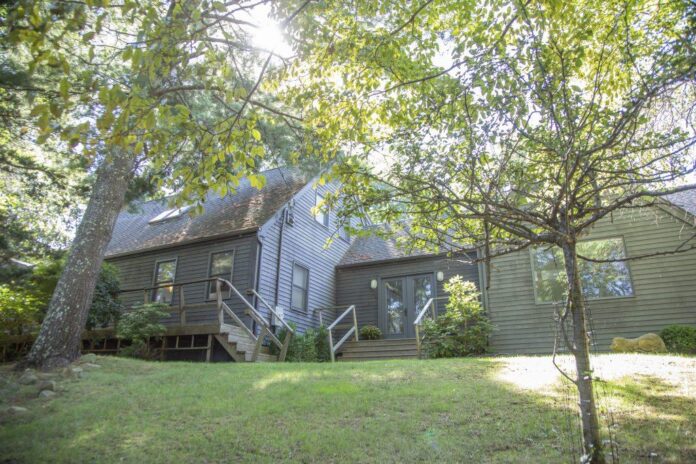 Elaine de Kooning lived an exciting life marked by travel, lovers, late nights, and an innate fortitude that landed her in the midst of the Abstract Expressionist movement. She never wanted to be tied down, but in 1975 she purchased a house at 55 Alewive Brook Road, in East Hampton, Long Island. She was well into her painting career and was drawn to the property, sharing with a friend, “In short, I bought a basement with a nice, brand-new house on top.”

By this time in her life, she and her husband, the artist Willem de Kooning, had been living apart for many years. Their relationship was complicated: As emphasized in the risqué account by Lee Hall, (1993), the two married in 1943 but pursued their own entanglements, which culminated in 1957 when they separated, but did not divorce. His home was near the Pollock-Krasner house on Fireplace Road, and Elaine acquired her abode a short drive away. Willem was deep into his alcoholism, and Elaine, also a heavy drinker, assumed the role of caretaker from under another roof. Late last year, after a concerted effort by the current owner, that structure has now been recognized by the National Park Service as a place of historic import. 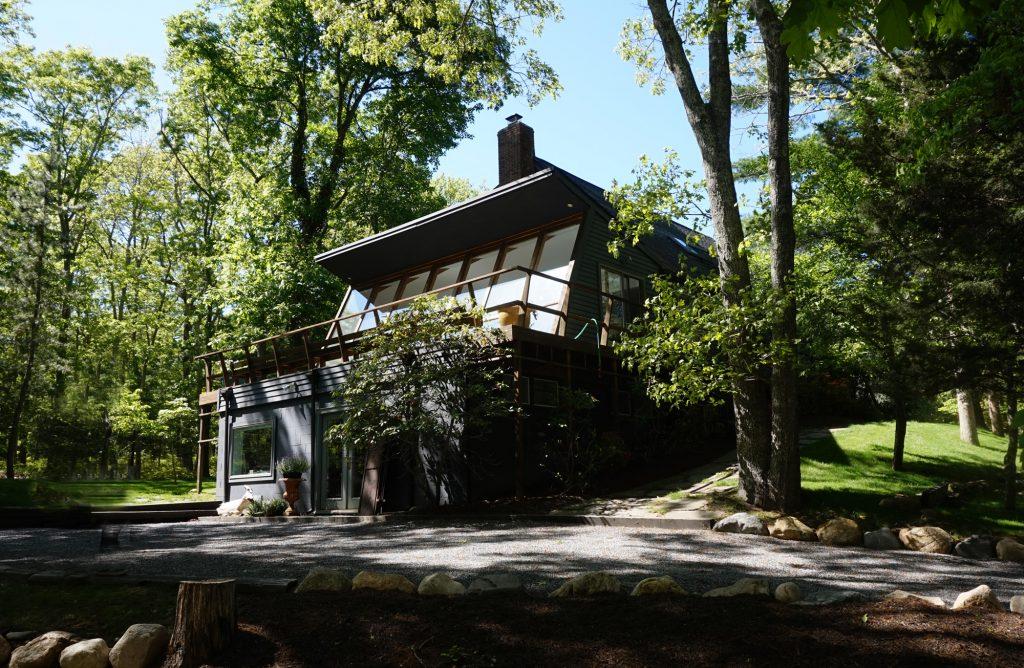 Elaine built a connected studio on the site and worked there for the rest of her life. She reveled in maintaining the house as her separate sphere, where she had total independence and friends like the artist Connie Fox nearby. She painted rigorously in the studio, cigarette in hand, often on a ladder, while her studio assistants stretched large-scale canvases below. It was here that she created some of her most recognizable and monumental paintings, including the series and (1985–88), inspired by a trip to Lascaux, France. 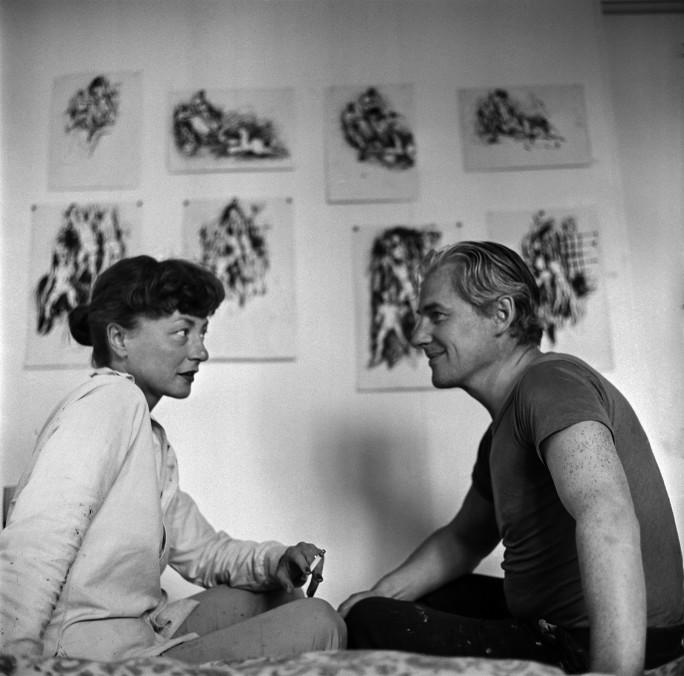 After Elaine died, the house was owned by sculptor John Chamberlain from 1994 through 1998. When Chamberlain moved out, preferring to live and work on Shelter Island, the home was used by painter Richmond Burton. That is, until 2010, when entrepreneur Chris Byrne learned that the dwelling was on the market, and he decided to buy it. 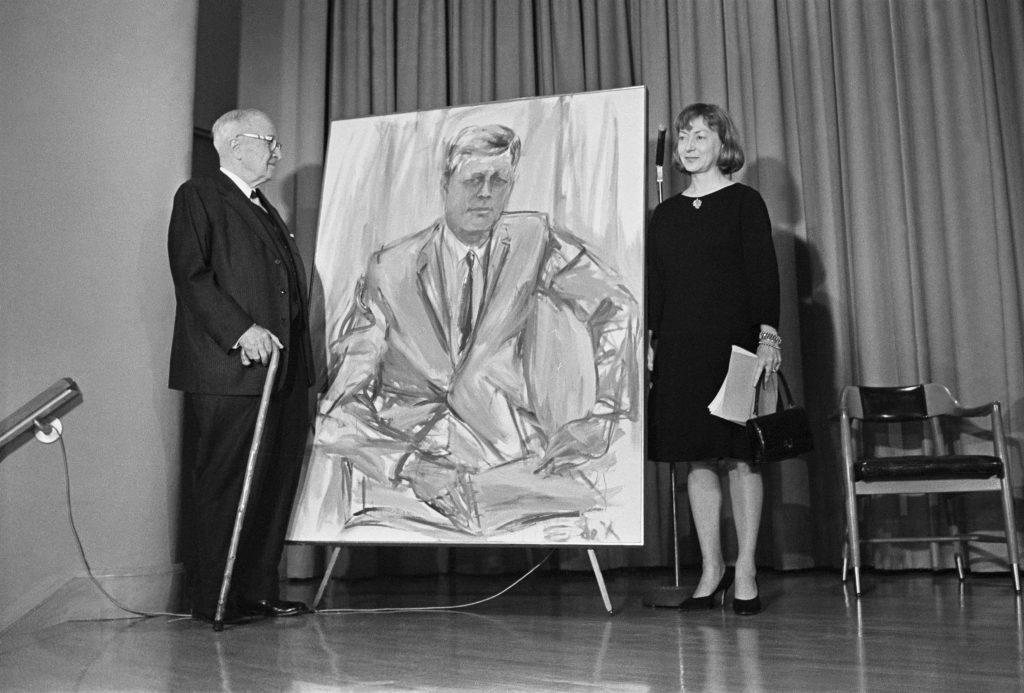 Former President Harry S. Truman stands next to a painting of John F. Kennedy, commissioned for the Truman Library. Artist Elaine de Kooning stands on the other side of the painting. Photo: Bettmann.

Byrne, who divides his time between the East End of Long Island, Manhattan, and Dallas, recently told Artnet News, “Today, Elaine’s studio practice seems prophetic. We plan to continue to foster this spirit by making the space available to artists and the public alike, while preserving the original structure and its history.” Recognizing the importance of maintaining the site and its significance for the area, two years ago Byrne set in motion a bid for the house to be listed in the National Register of Historic Places, as declared by the United States Department of Interior. It was granted this status late last year; the official plaque was installed this month. (The house is currently open to visitors by appointment only.) 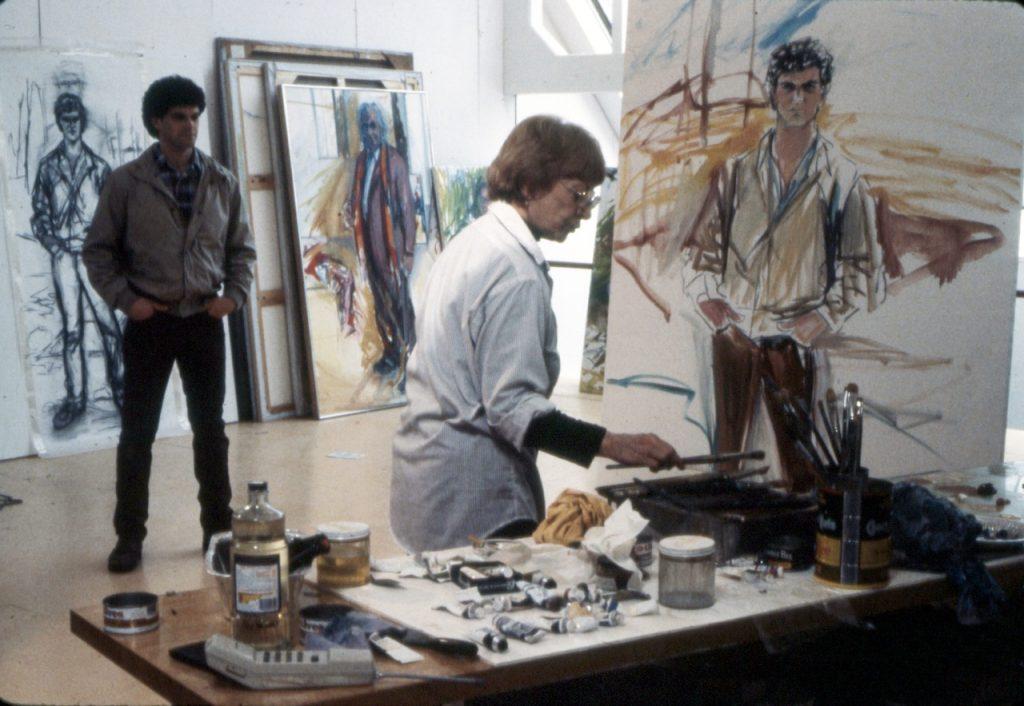 Byrne saw the potential for contemporary artists to reawaken creative energies that had lain dormant. He had studied art when younger and published an artist book called in 2013. Although he’d never practiced art full-time, he had a network of artists at the ready, and soon realized that he could allow them to utilize Elaine’s studio in a kind of informal residency. The first artist he invited was Jose Lerma, for summer and fall 2011. Since then, Byrne has welcomed 28 artists, including Joe Bradley, Sadie Laska, Katherine Bernhardt, Keith Mayerson, and Eric Haze, among others. In 2020, Lonnie Holley produced an exhibition’s worth of new paintings, works on paper, and sculpture, which were shown last year at the nearby Parrish Art Museum in “Lonnie Holley at the Elaine de Kooning House: Everything That Wasn’t White.” 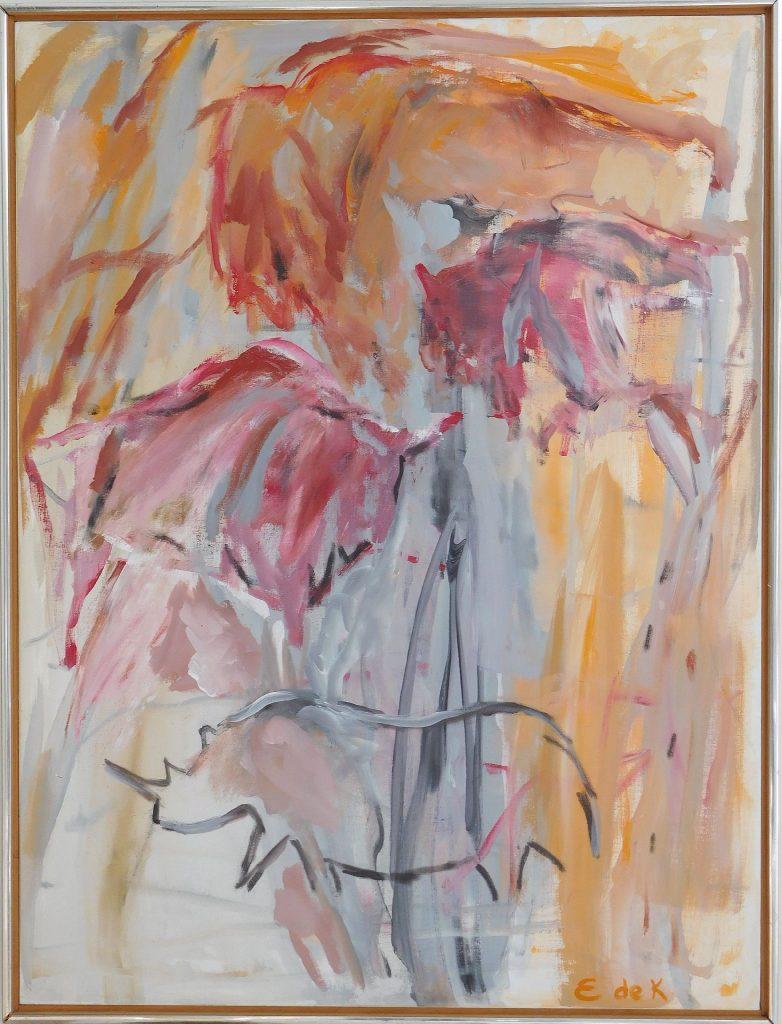 Elaine de Kooning, (1988), one of the artist’s late works from the “Cave Paintings” series she undertook in her East Hampton studio. Photo courtesy of Amar Singh Gallery/Christie’s New York.

Currently, the house is hosting sculptor Frank Benson and the multidisciplinary artist Laurie Anderson, who is making large-scale paintings. The artists have full access to the property, and the option to live as well as work on site. There is no official timeline, and no official rules as to how it should function, no requirement for how often the artists use the studio. “We don’t like to be too prescriptive,” said Byrne. “What comes out is always better than what I could imagine or propose.” 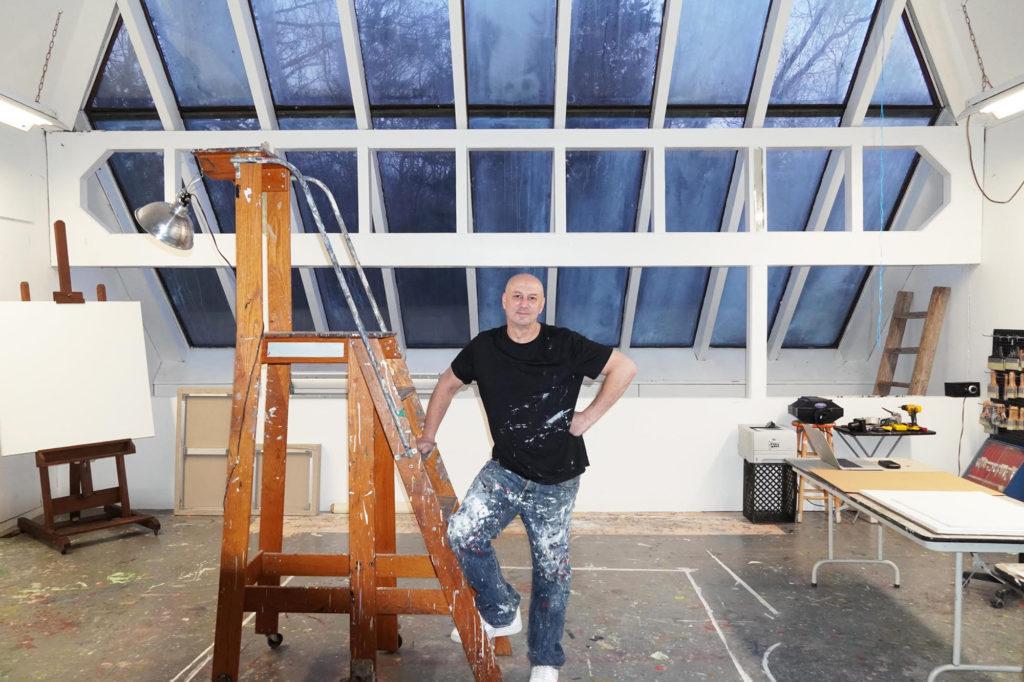 Benson, for instance, shared that since being at the studio he has “spent weeks spraying acrylic paint onto paper while listening to [the audiobook] , by Mary Gabriel. It was like a full-sensory immersive course in Abstract Expressionism.” The setting seems to have rubbed off on his art, too. “Currently, I am using A.I. software to generate images that are influenced by the AbEx history of East Hampton,” he explained. 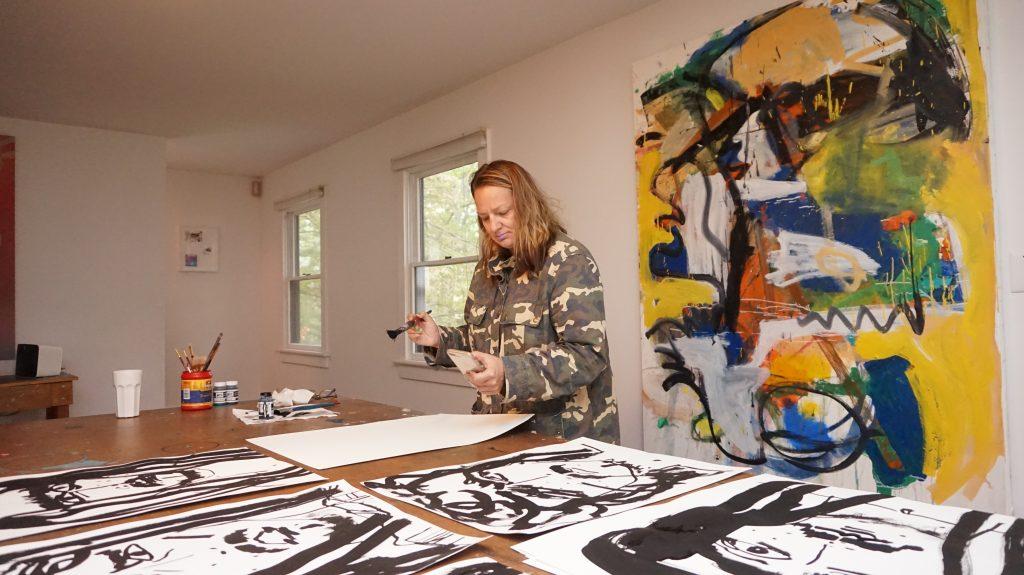 During her lifetime, Elaine de Kooning never received the amount of attention or success that her husband and his famous circle did. But recent scholarship has redirected attention to de Kooning and her female peers, including a landmark exhibition curated by Gwen Chanzit, “Women of Abstract Expressionism,” that debuted at the Denver Art Museum in 2016 and toured to North Carolina and California. After the publication of Gabriel’s in 2018, which chronicled the contributions of Elaine de Kooning, Helen Frankenthaler, Grace Hartigan, Lee Krasner, and Joan Mitchell, the market bore more fruit. One of de Kooning’s “Cave Paintings” from the Alewive studio, (1985/86), sold in March 2021 for $562,500, a new artist record. Hartigan’s (1959) fetched $1.4 million in May 2022, while Mitchell’s (1969) brought $16.6 million in May 2018. While de Kooning’s prices remain lower than those of some of her peers, her vision lives on through the hands of others, now working in the studio she built for herself and left with love 33 years ago. Thanks to Byrne’s efforts, the proof now lives in a sign visible to all who pass by.