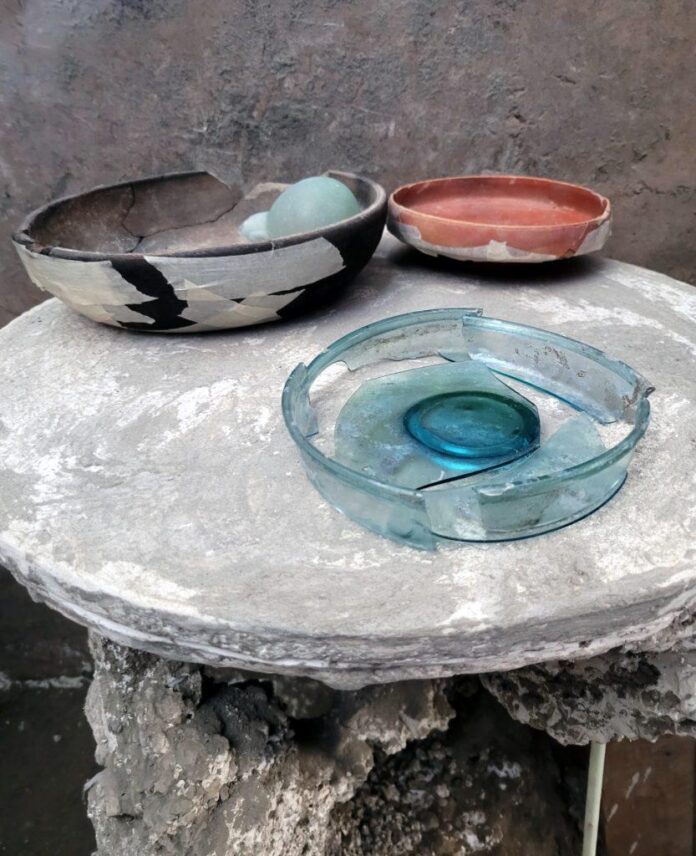 Pompeii keeps revealing its secrets. Archaeologists at the ancient site, which was engulfed by volcanic ash in 79AD spewing from Mount Vesuvius, have unearthed a series of rooms in a residence belonging to a middle-class family whose household items were buried in the volcanic debris.

The small, furnished rooms were discovered around a lararium, a room of worship decorated with depictions of plants and birds (this part of the site was excavated in 2018 in Regio V, one of the largest districts of the ancient city). Recent archaeological digs revealed four new rooms: two upper areas on the first floor of the house and those on the ground floor in front of the lararium.

In the upper rooms, well-preserved ceramic vessels for everyday use in the kitchen and the canteen, but also vessels made from sigillata—a type of Roman fine table ceramic—and from glass were found within a large cupboard, which collapsed during the eruption.

A small cast of waxed tablets is another significant discovery. “A truly unique find, it has allowed us to create the first example of a cast which allows a perfect yield of both volume and detail. It is a group of seven triptychs, tied together by a small cord both horizontally and vertically,” Pompeii officials say.

A bedroom complete with furnishings is on the lower floor adjacent to the lararium, housing a wooden bed similar in structure to three beds discovered last year in the Villa of Civita Giuliana in the Room of the Slaves. Alongside the bed is a bipartite wooden chest, left open at the moment when the owners fled.

The chest contained a small sigillata plate and a double-spouted lantern with a bas-relief depiction of the transformation of Zeus into an eagle. The discoveries sparked a flood of comments on social media with one contributor saying: “[This is] the snapshot of a tragedy, which reveals itself to us with every excavation.”

Massimo Osanna, Italy’s director general of museums, explains how the latest research sheds light on the daily lives of a burgeoning middle class in Pompeii. “In the Roman Empire, there was a significant proportion of the population which fought for their social status and for whom the ‘daily bread’ was anything but taken for granted,” he says in a statement.

“It was a social class that was vulnerable during political crises and famines, but also ambitious to climb the social ladder. In the House of the Lararium at Pompeii, the owner was able to embellish the courtyard with the lararium and the basin for the cistern with exceptional paintings, yet evidently funds were insufficient to decorate the five rooms of the house, one of which was used for storage,” Osanna adds.