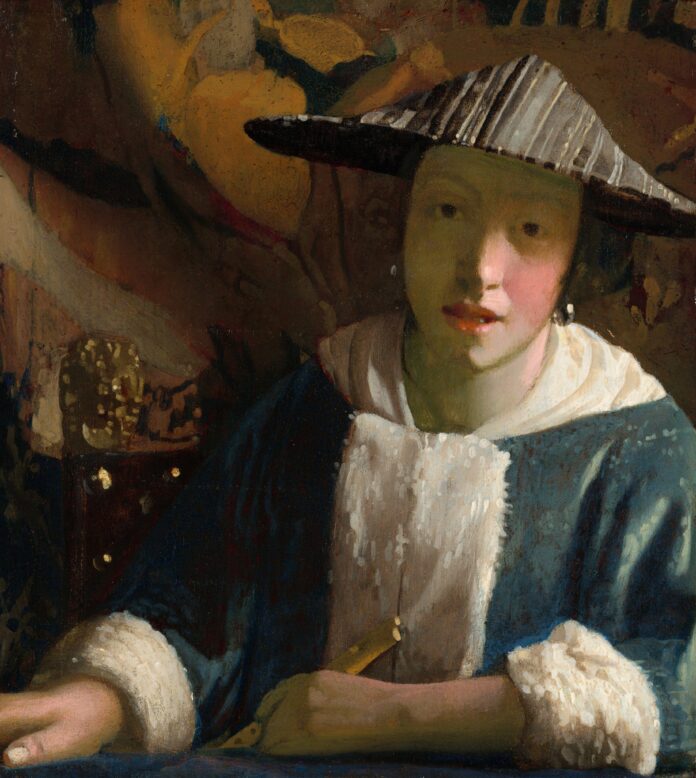 A work at the National Gallery of Art in Washington, DC once thought to be by Vermeer is now regarded as a fake. New research shows that Girl with a Flute is not from the hand of the Dutch master, although it was probably made in his studio. The painting had been donated as a Vermeer in 1942.

This downgrading follows a detailed study of the six paintings in Washington that at various times have been regarded as Vermeers. Three are now confirmed as fully authentic: Woman holding a Balance (around 1664), A Lady Writing (around 1665) and Girl with the Red Hat (around 1669). Two others have long been seen as forgeries, made to deceive. Girl with a Flute is now regarded as a studio work.

All the works are now going on display, accompanied by the results of recent scientific examinations. The exhibition Vermeer’s Secrets runs at the National Gallery of Art from 8 October to 8 January 2023.

The show provides a behind-the-scenes look at how the Washington curators, conservators and scientists investigated the six paintings to understand “what makes a Vermeer a Vermeer”.

Their discoveries will have a much wider impact on Vermeer scholarship, since the results question some long-held assumptions about the master’s work. As a gallery spokesperson explains: “Beneath these polished surfaces, a different image emerges: of an impetuous, even impatient artist.”

Until now, Vermeer has been viewed as a solitary genius. There is no known documentary evidence that he operated a studio or had assistants. This led to the assumption that he worked alone, painstakingly completing his life’s oeuvre of only around 35 works.

But the interdisciplinary investigation of Girl with a Flute concludes that the artist probably did run a studio in Delft, at least in his later years (the picture is now dated from around 1669 until his death in 1675).

But who was the artist behind Girl with a Flute? It was most likely an apprentice or paid assistant, although Marjorie Wieseman, the gallery’s head of northern European paintings, believes it could possibly have been a member of the artist’s family. If so, it would almost certainly have been his eldest child, Maria, who was born around 1654 and would have been aged 15 to 21 when the picture was completed.

Stylistically, Girl with a Flute lacks the quality and precision of Vermeer’s paintings, which in recent decades led a number of specialists to reject the work. But other key curators accepted it, including the late Walter Liedtke, of New York’s Metropolitan Museum of Art. Arthur Wheelock, the National Gallery of Art’s own former curator, initially rejected the painting, but a few years ago he changed his mind, accepting it.

Girl with a Flute, which emerged in 1906, is probably not a forgery which was made to deceive. It was most likely made by someone who was close to Vermeer and the work was then misattributed in the 20th century.

Wieseman and her colleagues believe that it was made by someone who understood Vermeer’s materials and working process, but was unable to master them. The pigments in the top paint layers were coarsely ground, giving the surface a granular character. Vermeer, however, used coarse paint for the under layers, but finely ground pigments for the top layers to achieve a delicate surface. Inexplicably, the artist of Girl with a Flute made a mistake and did the reverse.

Vermeer would create subtle green shadows by sensitively modulating the colours and painstakingly blending the edges of the paint. But in Girl with a Flute, the shadows were much more heavily applied, creating a blotchy appearance under the woman’s nose and along the jawline.

However, there are also similarities in the technique and pigments, which strongly suggest that the picture was done by someone well aware of Vermeer’s working method. Wieseman tells The Art Newspaper that Girl with a Flute was clearly influenced by another authentic Vermeer, Girl with the Red Hat (or another lost painting with a similar composition)—but Vermeer “did not play a direct role” in the conception of the flute picture, she says.

The women in the two paintings certainly appear similar, and it is likely that they are based on the same model. The figures in both Girl with a Flute and Girl with the Red Hat share long, slender faces, dark brown eyes, focused gazes and slightly parted lips. The woman’s identity remains a mystery.

Neither painting, however, is a portrait. They are what the Dutch call a tronie: a study of a head modelled on a real person, but intended to focus on their expression and costume.

Girl with the Red Hat, which is also in the National Gallery of Art’s collection, was subjected to a detailed investigation. The attribution to Vermeer was fully confirmed, but here too there was a surprise—this time on the style and dating.

The vivid colours of Girl with the Red Hat and the bold manner of the paint application led the team of analysts and researchers in Washington to conclude that it was made during the final phase of Vermeer’s career. It is now dated to around 1669, six years before the artist’s death, rather than the previous dating of 1666-67.

Girl with the Red Hat was produced at a turning point in Vermeer’s career, when he was experimenting with new techniques. He started to work with broad strokes, establishing a foundation for his characteristically smooth surface paint.

Scientific examinations also confirm that Girl with the Red Hat was painted on top of a partially completed portrait of a man. The original picture depicted a man with a black broad-brimmed hat, long hair, white collar and billowy cloak. This was standard attire for the mid 17th century, providing few clues as to his profession—so it will be a challenge to identify him.

The National Gallery of Art’s two greatest Vermeers were also throughly investigated in preparation for the exhibition. Woman holding a Balance was begun with the composition sketched out in monochromatic paint, applied quickly with broad brushstrokes. The finely worked surface paint was then handled very differently.

A Lady Writing reveals the extent of Vermeer’s perfectionism. For instance, he used four different yellow pigments in the woman’s jacket sleeve. He also adjusted compositional details: the angle of the quill pen was made slightly more vertical, to suggest active writing.

The exhibition also includes two 20th-century forgeries, The Lacemaker and The Smiling Girl, which were both attributed to Vermeer when they entered the gallery’s collection in 1937 as part of Andrew Mellon’s bequest.

When the two pictures first emerged in the mid 1920s they caused a sensation, since this was the period after the artist had been rediscovered and was being greeted as a genius. Distracted by “Vermeer fever”, art historians and dealers were uncritical in accepting discoveries.

It is now believed that the forger of both works was Theodorus van Wijngaarden, a Dutch restorer later known to have bought cheap old paintings and “improved” them for resale. He was also an associate of the notorious Vermeer forger, Han van Meegeren.

Following the National Gallery of Art’s research project, all three authentic Vermeers and Girl with a Flute are expected to go to a major retrospective at the Rijksmuseum in Amsterdam (10 February-4 June 2023). It is being billed as the largest Vermeer show ever.