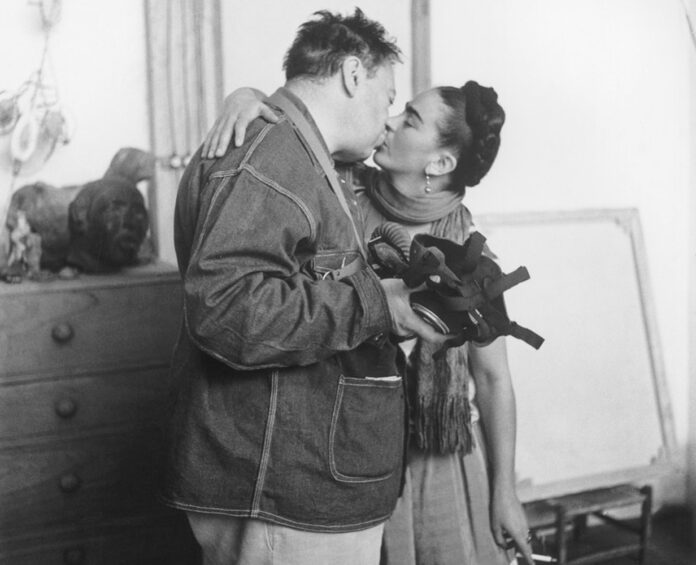 The relationship between Diego Rivera and Frida Kahlo began as a teacher-student romance. United by a love of painting and the utmost respect for each other’s creativity, the couple married in 1929. Ten years later, they divorced after it was revealed that Rivera had an affair with Kahlo’s sister Christina. But a year later, the dynamic duo renewed their marriage a year later. Rivera always considered his wife to be more talented than himself. Their relationship lasted until Kahlo’s death in 1954.
Diego Rivera and Frida Kahlo are maybe the most famous artist couples.

Pablo Picasso’s fascination with female forms came from a long line of women whom he called his muses. His most respected muse was his longtime partner Francoise Gilot. At the tender age of 21, Gilo was already creating her own paintings. Her work was highly respected, even though she was still a student at the time.

Picasso carried on a turbulent ten-year affair with Gilot – fathering her two children. The famous artist couple inspired each other artistically. Gilot acted as Picasso’s muse for a decade.

Pablo Picasso and Dora Maar are one of the most famous artist couples of the 20th century. Maar was a talented photographer. From the moment she met Picasso, she was fascinated by him. These relationships overshadowed the work of Dora Maar, who also began to draw and write poetry. The end of her relationship with Picasso was painful and left her weak and heartbroken.

One more famous artist couple is Salvador Dalí & Gala. They spent 50 years of their lives together. They met in Paris in 1929, and it was love at first sight. Gala left her husband and little girl to live a passionate life with Dali, who idolized her as his muse. Their passion never faded. The love story of Dali and Gala has rightfully entered the annals of art history as one of the most famous artist couples of all time.

Camille Claudel met Auguste Rodin at the age of 19, when she was a student of the sculptor. He immediately found her talented, uniqu, and inventive. Claudel helped Rodin make some of his greatest masterpieces. But their relationship ended violently. Rodin refused to marry her and did not want to end his long-term relationship with Rosa Bere – the mother of his son, and then his wife. Camille Claudel ended her relationship with Rodin after she had an abortion.

We often imagine artists as introverts cut off from the world, devoting their lives to creating their work. However, many artists have romantic encounters that propelled their work to another level, allowing them to create some of their finest masterpieces.

Today’s Google Doodle Celebrates Judith Leyster, the 17th-Century Dutch Painter Whose Works Were Once Misattributed to Her Male Peers

Why are NFT platforms opening up physical gallery spaces?