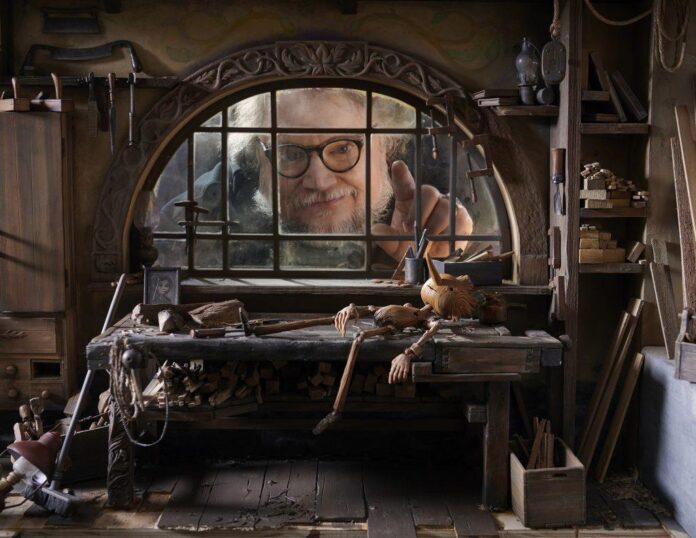 While the miniature sets and puppetry pieces soon to be unveiled at the Museum of Modern Art (MoMA) may look like a nod to December’s booming toy sales, they were actually assembled for the New York institution’s latest motion picture-focused exhibition, “Guillermo del Toro: Crafting Pinocchio.” Opening on December 11, the show takes a behind-the-scenes look at “Pinocchio”—the award-winning filmmaker’s new, undeniably dark, stop-motion take on Carlo Collodi’s classic 1883 children’s story.

Featuring new plot developments courtesy of Del Toro, “Pinocchio” is the Mexican filmmaker’s first stop-motion animation film. He co-directed the film with stop motion animator Mark Gustafson, who is making his feature directorial debut. The film is already in select theaters and will be available on Netflix on December 9.

Netflix first pitched the show to MoMA last year, while “Pinocchio” was still in production in Portland and Guadalajara, the museum’s film curator, Ron Magliozzi, told Artnet News. He and the exhibition’s co-curator Brittany Shaw traveled to Oregon for their preliminary meeting with Del Toro in October 2021. “Collaborative effort was important,” Magliozzi recalled of their initial conversation. “We went into the first day of visiting the studio with that in mind.”

“Crafting Pinocchio” unfolds across four floors: it begins with several retellings of the story, including a 2002 edition illustrated by Gris Grimly (which inspired Del Toro), to help contextualize Del Toro’s film, before delving into the film’s pre-production and production stages. It culminates with a program of film features, including several screenings of Del Toro’s “Pinocchio”, from December 22 to December 29, as well as a larger retrospective of all 12 of the filmmaker’s feature films, from December 2022 until January 2023.

Magliozzi has curated previous shows at MoMA around Pixar (2005–06) and Tim Burton (2009), but those focused heavily on concept art—a stage in the animation process that is falling away due to digital tools. “Crafting Pinocchio” shows the shift to research-based studies to create scenery and costumes. 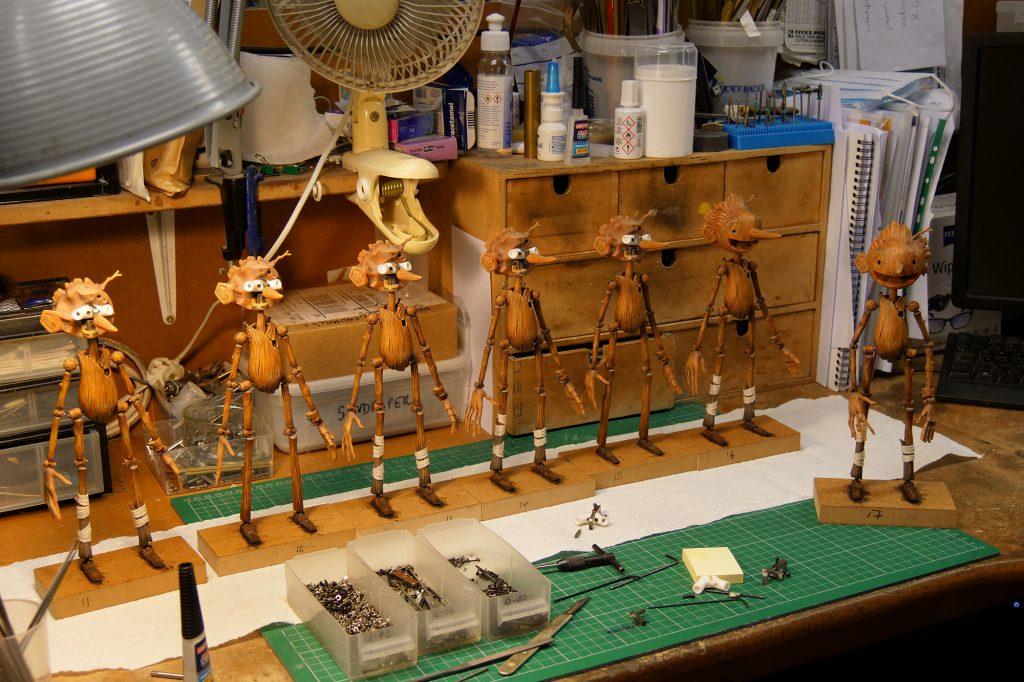 Del Toro’s version is set in Fascist Italy and his team went to great lengths to accurately depict a typical 1930s Italian town by diligently scouring historical studies and even topographical maps to fine-tune details such as the color of the sky and even the shape of acorns.

They even used vegetables like cauliflower and mushrooms to imagine the textures of fantastical characters. Those concepts grew into maquettes, paper standards, and then full puppets, cast from the very acrylic molds on view in illuminated cases throughout “Crafting Pinocchio.” Interestingly, Del Toro spent his early career in special effects, even making molds himself.

Full-sized puppets were only made for main characters that required close-up shots, like Pinocchio, whereas a background puppet is six inches tall at most, and pretty much flat at just half an inch thick. The life-sized Pinocchio from the film will be on view, but he doesn’t look like the Disney version’s real boy. Del Toro sifted through over 232 Italian adaptations of Pinocchio to understand the character’s nuance and tie it back to his own vision.

This vision is honored in the exhibition with three new video works in a lower gallery that connect themes throughout Del Toro’s film practice.

To give audiences a sense of what production was like, the curators shipped lighting rigs, dragon screens, five working sets, and four large set pieces, including the largest—a church—from Portland. They’re all puppet sized, disassembling easily so puppeteers can bring scenes to life and be captured up close by cameras so everything appears scaled to real life. 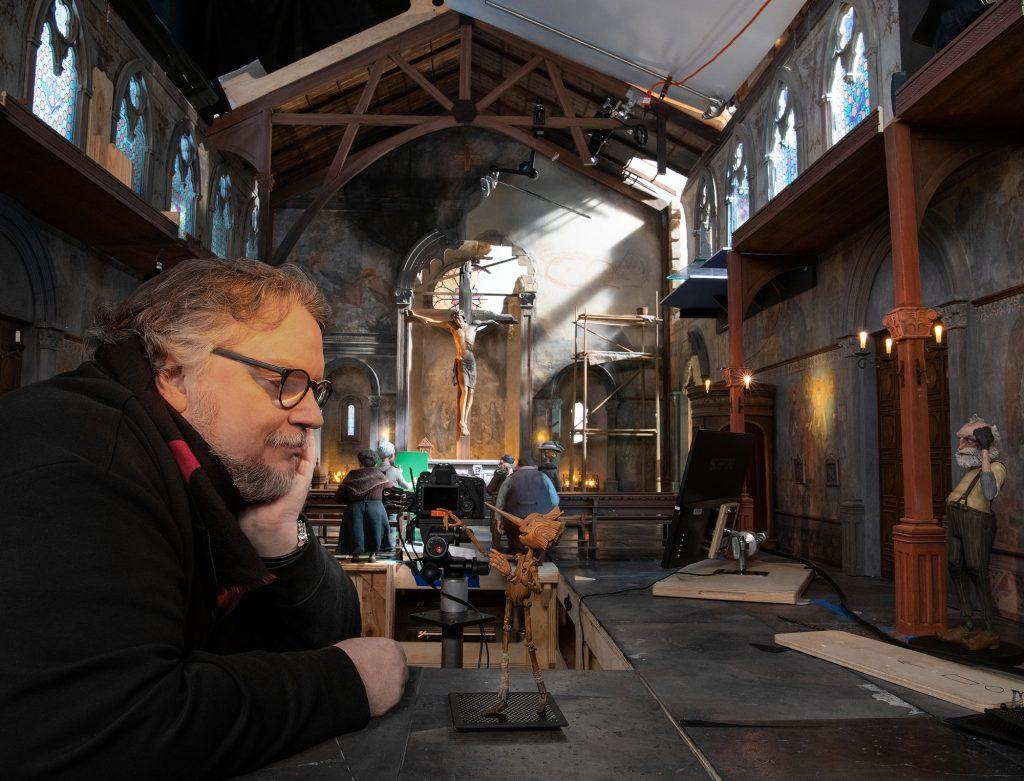 Ephemera such as alternative movie posters and time-lapse videos of the animators in action will also feature at MoMA, alongside an animation schedule board from the Portland studio, complete with pushpins and rubber bands. “They’re like 10 feet tall,” Magliozzi said. “You think that would be done on a computer, but it’s apparently too complicated and easier to deal with this way.”

While the props, puppets, and sets selected by the curators share the film’s story, people power has proved to be the most important element in the film’s creation. The puppets were made both on- and off-site by companies such as the U.K.-based studio, Mackinnon & Saunders, with some craftspeople making them in their apartments during the pandemic. Meanwhile, at the studios, teams of animators would often work on the same scenes at the same time as it can take dozens of animators a full week just to get several minutes of footage.

It is fitting, therefore, that the last thing visitors see before leaving “Crafting Pinocchio” is a wall of Polaroid portraits featuring every craftsperson who worked on Del Toro’s film.

“All the artists working in the studio had to have a Polaroid taken when they started their first day of work,” Magliozzi recalled. Even as people left the crew, their photos remained and new ones were added as people joined the team.

If you pick up an audio guide, you’ll even hear some of the voices behind those faces narrating “Crafting Pinocchio.”