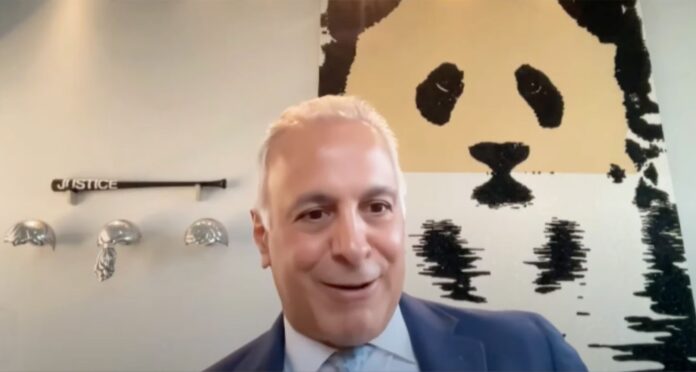 Eric Herschmann, who served as a senior advisor to former US president Donald Trump and represented him at his first impeachment trial in 2020, has been turning heads during the ongoing hearings conducted this month by the Select Committee to Investigate the January 6th Attack on the United States Capitol with his testimony—and his contemporary art collection.

On the other side of the screen is a baseball bat emblazoned with the word “JUSTICE”. That work, Justice (2013) by the New York-based Chilean artist Sebastian Errazuriz, was reportedly given to Herschmann by a client as thanks for a successful trial. Ominously placed just beneath the bat is a trio of silvery sculptures resembling wigs cast in steel. The sculpture, by Mexico City-based artist Tal Frank, is apparently intended as a reference to Herschmann’s three children, its placement beneath the blunt weapon of justice intended as a joke about the lawyer’s parenting style.

Despite having previously defended Trump, Herschmann grew increasingly critical and outspoken of efforts to overturn the results of the 2020 presidential election, according to testimony heard by the 6 January select committee today and in previous sessions. In an exchange with lawyer and “big lie” proponent John Eastman the day after insurrectionists stormed the US Capitol, Herschmann testified that Eastman “started to ask me about something dealing with Georgia and preserving something potentially for appeal, and I said to him, ‘Are you out of your fucking mind?’”

Plus, Polish authorities scupper the sale of a Kandinsky they say was stolen from Warsaw in the '80s, and RISD staff votes to strike.