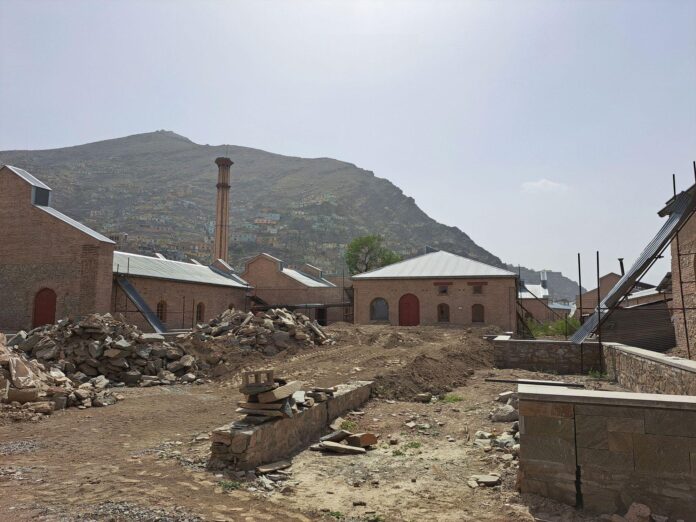 The German government has cancelled its contract with Aga Khan Trust for Culture (AKTC) for the Kabul Riverfront Transformation (KARIT) project, a cultural development project in the heart of the capital.

The KARIT project began in 2018 and was described as an ambitious project that aimed to contribute to the development and stabilisation of the historic city by improving living, working and environmental conditions for local communities. It was initially suspended in August 2021 after the Taliban takeover of Afghanistan. However, in September the German Federal Foreign Office, which had been funding the project through kfW Development Bank, terminated its contract, leaving the unfinished development in limbo.

The €18m project included transforming and modernising the historic Machine Khana Industrial Complex, a series of 19 warehouses built in the 19th century by Abdur Rahman Khan, the Emir of Afghanistan from 1880-1901, for producing weapons and military supplies before expanding to manufacture a range of other goods.

Other components of the project included creating urban public and landscape spaces as well as infrastructure investment in the surrounding residential areas. Crucially, a new art gallery was also part of the plans.

“Unfortunately, funding to complete the project has not been made part of the ‘humanitarian’ or ‘humanitarian plus’ aid packages currently available for Afghanistan by donors, which is short-sighted as more than 70% of funds that have been dispersed under this project went towards salaries for labour and staff, one of the key conditions of humanitarian aid now,” says Ajmal Maiwandi, the chief executive officer of AKTC Afghanistan. Due to sanctions imposed on the Taliban government, financial support that can be provided to Afghanistan is mostly limited to humanitarian assistance.

“This has caused us to terminate employment for nearly 1,600 labourers and a further 160 employees at this site at a time when the economic situation continues to deteriorate significantly,” he says.

Asked about his experience with the Taliban government and its approach to cultural heritage projects so far, Maiwandi says: “The government’s position has been remarkably consistent with regards to preservation of monuments, asking international organisations and even lobbying donors to re-engage in safeguarding cultural heritage.” The German Federal Foreign Office was contacted for comment but did not respond.

The Art Newspaper was granted access to the development site to witness the state of the project, which is said to be 80% complete. Located in the heart of Kabul’s old city, in the vicinity of Kabul River and the historic Timur Shah Mausoleum, the site appears abandoned. Construction waste, and unfinished access ways and landscaping are abundant. A few labourers can be seen moving plants into a nursery space.

A look inside the renovated and restored Machine Khana brick warehouses, some of which have absorbed old machinery as part of their architecture, reveal a series of intriguing multi-purpose modern “pods”, planned to be rented out. At the time of their last expansion in the 1890s, the size and the brick construction of these warehouses were unprecedented in Kabul. Beyond the warehouses sits a large outdoor social space with a panoramic view of the hillside communities.

Maiwandi says AKTC has remained committed to the project but is wary of what the future may bring if funding is not secured for the remaining 20% of the project, which is estimated to take more than a year to complete.

“We’ve been unable to secure alternative funding, for the reasons previously mentioned, and eventually we may have to hand the incomplete project back to its custodians. This would result in a sizeable portion of congested central Kabul being blocked off to public use,” says Maiwandi.

“Thus far, we continue to maintain the incomplete KARIT site—at our own cost—ensuring that the gains made to date are not undone and that the site does not transform into a public hazard at the centre of the city,” he says.

Sukanya Rajaratnam, a Change-Making Dealer Who Brought Overlooked Artists to Mnuchin Gallery, Has Departed After 15 Years