Home News Stars in the Making? Here Are 7 Breakout Artists to Watch From... 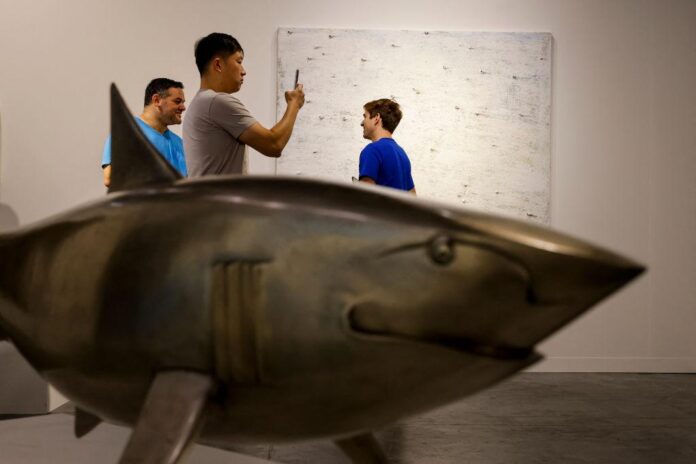 Between visits to the beach and celebrity-filled cocktail parties, there was actually some art on view last week in Miami, and industry veterans know not to get too distracted by the environment that they would miss an opportunity to identify the next big thing before it’s happened.

Collectors and advisors were hitting up Art Basel Miami Beach and surrounding events to hunt for up-and-coming talent. The Artnet News Pro was team among them, and here’s who we’ve tapped as the ones to watch. 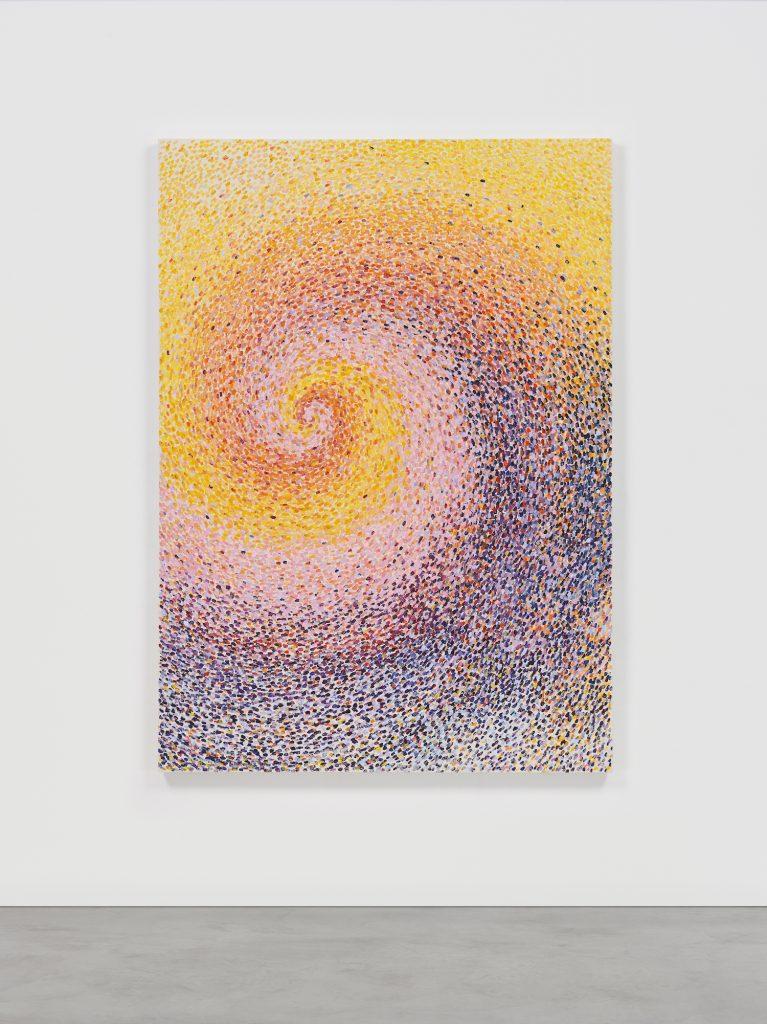 Who: A painter who is work is focused on the beauty of nature and landscape with a soothing palette that is reminiscent of the Fauvists and post-Impressionists.

Based in: Los Angeles, CA

Why You Should Pay Attention: O’Neil’s work is a visual oasis, which offers a respite from the digital overload of modern life. Her compositions can be read as cosmic diagrams, ethereal particles coalescing in atmospheric gradients, but their origins are far more earthly and humble: maps of L.A.’s back-canyon roads, migrating birds and spiraling eddies. 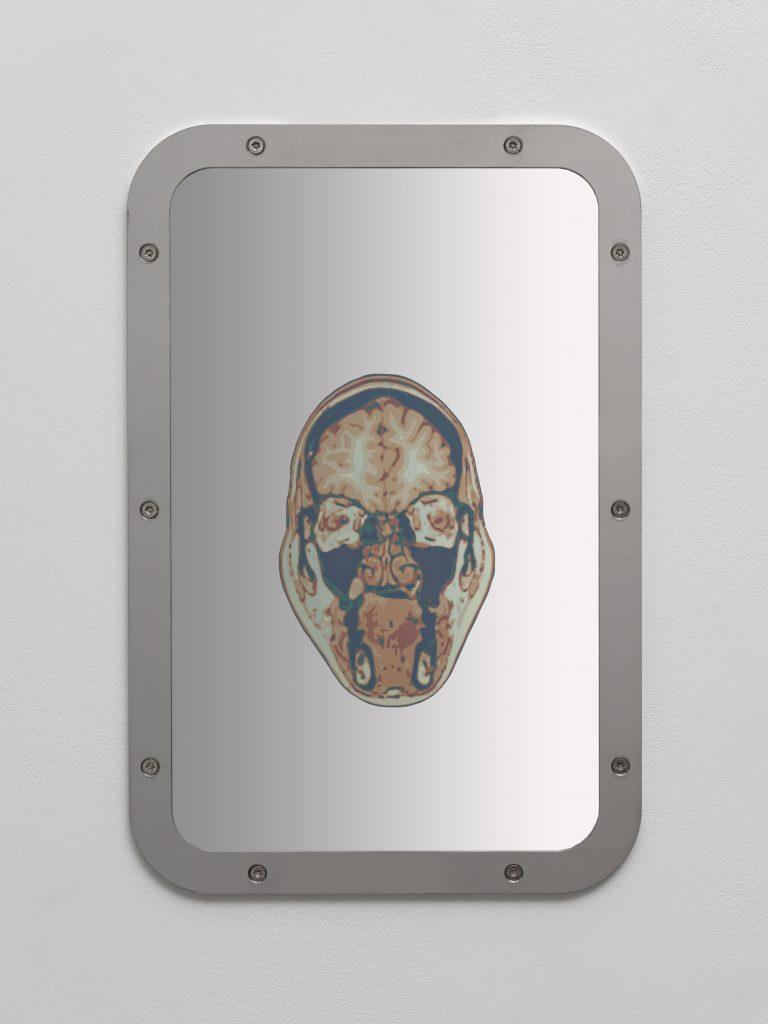 Who: Sung Tieu is a cross-disciplinary artist whose work explores mechanisms of civic influence and the psychology of warfare. Her solo booth with Emalin centered on a body of works about the so-called Havana Syndrome, a mysterious concatenation of chronic symptoms first reported by American diplomats stationed in Cuba in 2016. U.S. intelligence services have spent years investigating the thesis that the syndrome was caused by state-sponsored attacks with a sonic weapon, but their efforts so far lean toward the conclusion that the Havana Syndrome is a psychosomatic construct fueled by medical uncertainty, paranoia, and/or hawkishness toward foreign adversaries. Angelina Volk of Emalin said that Tieu is less interested in whether the syndrome is real than in how it is “activating imaginaries” and exposing how we process partisan information in contemporary times.

Prices: Works on the stand ranged from €11,000 each for 12 etched MRIs of the artist’s brain activity while subjecting herself to a re-creation of the sound described in declassified documents about the Havana Syndrome, to €18,000 each for four sound-based installation works intended to evoke specific symptoms of the illness.

Why You Should Pay Attention: Tieu’s resume already boasts a robust array of institutional exhibitions and museum acquisitions, with the latter category headlined by buys made by the Stedelijk and Tate. But she is finding an enthusiastic audience commercially, too; she won the Frieze Artist Award in 2021, and most of the works in Emalin’s booth at ABMB were sold ahead of the fair’s opening, according to the gallery.

Up Next: Tieu’s first two institutional solo exhibitions in the U.S. will debut next year, at MIT’s List Visual Art Center and the Amant foundation in Brooklyn, along with no fewer than three shows in Europe: at the Musée d’Art Contemporain de Bordeaux (CAPC) in France, Kunsthalle Nürnberg in Germany, and the Intermission gallery in Athens. 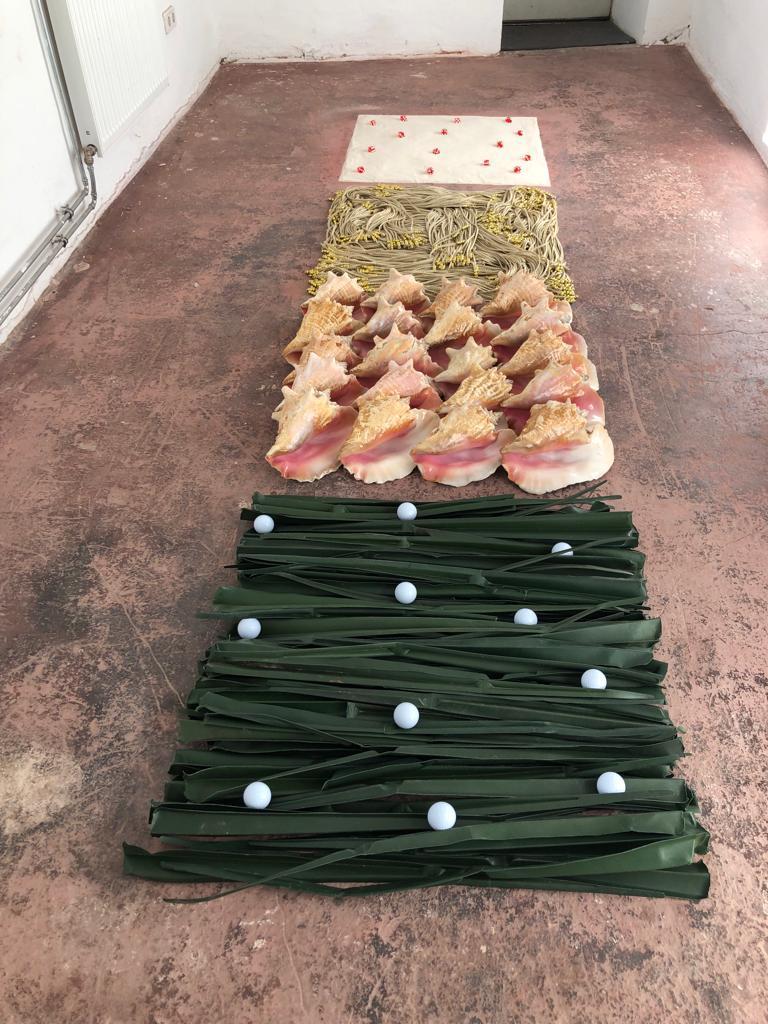 Who: At Untitled Art, Bahamian artist Blue Curry was showing Islands, the three-part sculpture Curry made with the Alice Yard collective from Trinidad for Documenta 15 earlier this year, with the option to buy the three pieces both collectively or individually. The installation was displayed on the floor, like squares on a chess board, with sections of braided synthetic hair, beach sand and dice, and conch shells that glowed from within, illuminated by LED lights. “If this was made of brick or glass, it would be a Carl Andre,” Tern founder Amanda Coulson told Artnet News, gesturing to the piece. “But the Caribbean gets written off—our colorful materials are seen as native and tropical and not serious.”

Why You Should Pay Attention: Curry was part of Documenta 15 in Kassel, Germany, and has also participated in the Liverpool Biennial, SITE Santa Fe, the Jamaica Biennial, and the Caribbean Triennial. As a recent Artnet News deep dive into the artist lists for the past five years of art biennials and triennials revealed, the artists invited to such prestigious exhibitions can remain quite separate from the commercial gallery world. But the artist, who graduated from London’s Goldsmiths College Fine Art program, is finding an audience in the art market as well, recently presenting his first solo gallery show at Tern Gallery in Nassau, the Bahamas.

Fun Fact: Curry has a dedicated fisherman on the island of Spanish Wales, where he grew up, to source the conch shells in his work—normally, the shells get broken while the meat is harvested.

Up next: You can catch Curry through December 17 in the group show “Tropical Is Political: Caribbean Art Under the Visitor Economy Regime” at the Americas Society in New York, before it travels to the Museo de Arte Contemporáneo de Puerto Rico in February. And he’ll be at Kimball Art Center in Park City, Utah, for their three-part exhibition “Between Life and Land” (December 9, 2022 through April 9, 2023). Finally, Islands will appear in a traveling version of the Tate Britain’s “Life Between Islands” coming to the Art Gallery of Toronto (AGO) in December 2023. 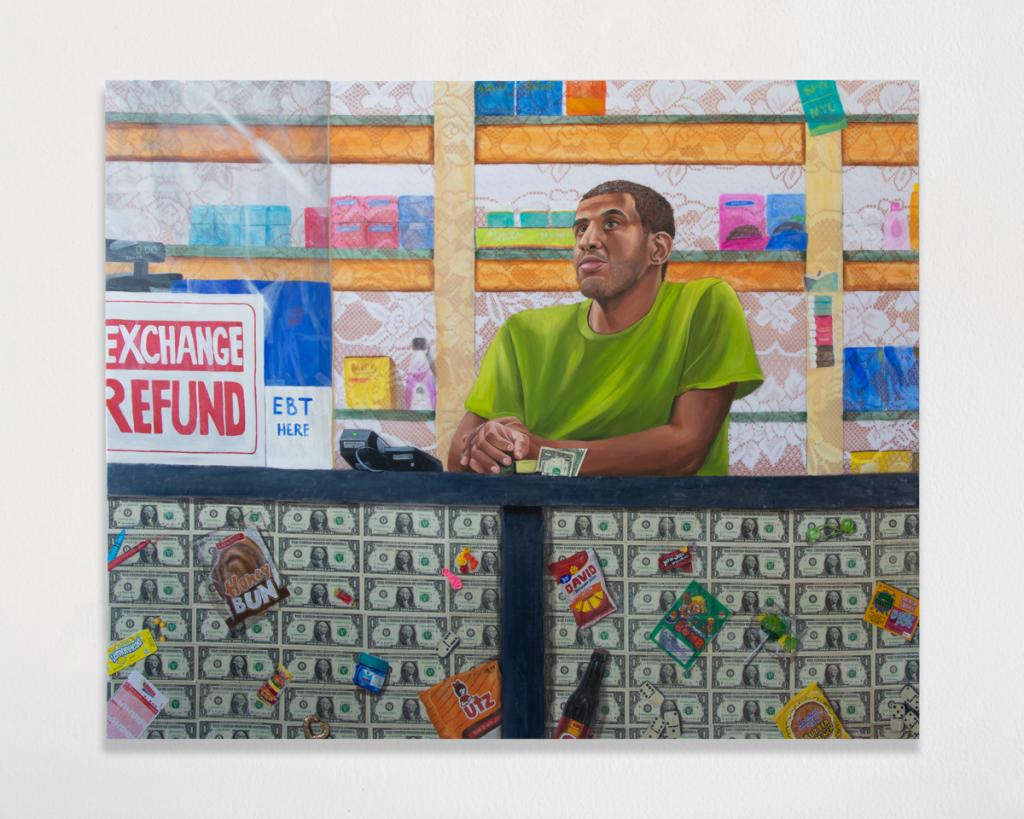 Danielle De Jesus, Here they know me by name, (2022). Courtesy of the artist and François Ghebaly.

Who: De Jesus makes figurative paintings focused on the Puerto Rican community in Bushwick, Brooklyn during the neighborhood’s gentrification. She uses various mediums, including U.S. currency, to tell the story of displacement. Her characters are usually low-income people of color living in Bushwick, such as the “bodegero” depicted in Here they know me by name. She paints on dollar bills to emphasize the effect that capitalism has on the colonial status of Puerto Rico throughout history.

Based in: Ridgewood, Queens

Why You Should Pay Attention: The artist received an MFA from Yale University School of Art in 2021. This year she did artist residencies at the Whitney Museum of American Art and was the first artist selected by the Beecher Residency, established by art collectors John Auerbach and Edward Tang in Litchfield, Connecticut. Her works are in the permanent collection of the Peréz Art Museum in Miami and private collections of Beth Rudin DeWoody and Susan and Michael Hort.

Up Next: Her first solo exhibition at Ghebaly Los Angeles opens on February 14. De Jesus is included in Whitney’s current exhibition, no existe un mundo poshuracán: Puerto Rican Art in the Wake of Hurricane Maria, through April 23. 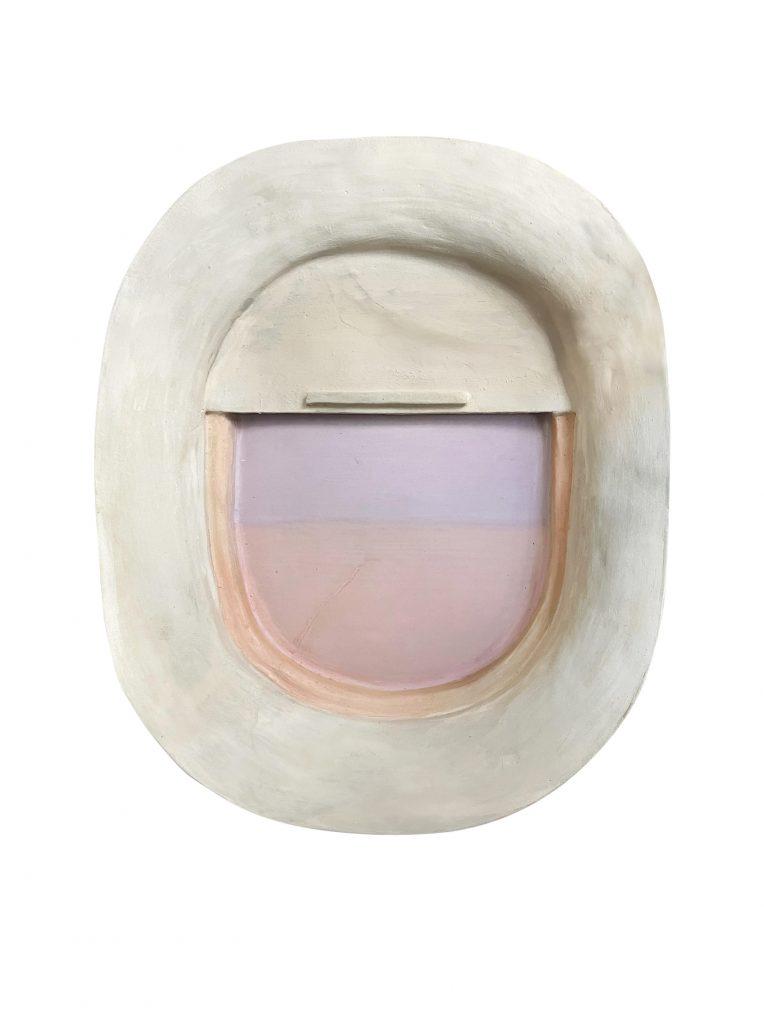 Who: The Peruvian artist, who migrated to New York City in 2003, is endlessly inspired by the ocean, and what gazing at the ocean can do to a person. Primarily working in ceramics and sculpture, her consistent use of a deep cerulean blue evokes the kind of contemplative calm that sea-gazing inspires. This was specifically true of her ceramic airplane windows on view at Untitled Art, as the jetset art world descended upon the city, fresh off of an airplane to the beachside tent on Miami Beach. “I am mesmerized by the power of water, it’s never ending ride, it’s possibility to pass through the smallest gap, it’s condition of eternal traveler,” she wrote in her artist statement.

Based in: New York City

Why You Should Pay Attention: The ceramic wall-works flew off the walls, and reportedly were sold out by mid-week. The artist has her work in several important collections, including those of Beth Rudin-De Woody, Eric Shiner, Alberto Rebaza and Ginette Lumbroso, and Luis Oganes.

Fun Fact: The airplane windows she creates are not imagined. Per each title (31B, 16C, for example) all correspond with a flight that the artist was on. She creates her color palette not only from what she saw outside of the window, but also the mood she was in while up in the air.

Up Next: Chueca is currently the artist in residency at East Harlem’s Sugar Hill Children’s Museum of Art & Storytelling, which will culminate in her first ever museum show. 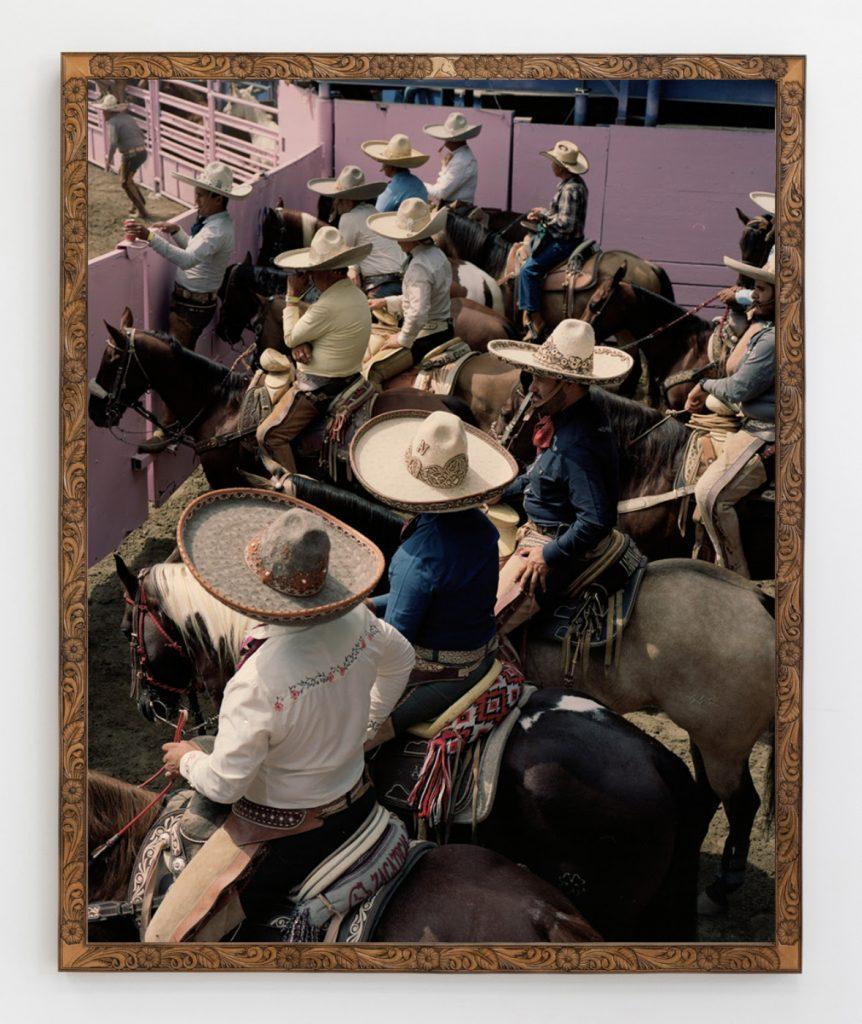 Who: Raised in suburban Chicago, Carlos Jaramillo has spent the past few years immersing himself in Los Angeles’s Mexican rodeo scene, called charreada. His large format photographs celebrate this rich culture with its traditional costumes—and are displayed in custom-made frames of Modelo beer cans and stunning, intricately patterned leather. (The latter, each sold in an edition of one, all sold out.)

Based in: Los Angeles

Why You Should Pay Attention: Jaramillo has already conquered the commercial photojournalism world, with work in publications such as the New York Times and the New Yorker. His first photo book, also titled Tierra Del Sol, was just named the photography book of the year by Time and Smithsonian Magazine. “This is his first foray into fine art,” Michael Fleming, the gallery’s executive director, told Artnet News, letting it slip that the Ringling Museum in Sarasota had snapped up one of the large-format photographs for its collection.

Up Next: Stay tuned for a solo show in Los Angeles in the new year. And if you want a copy of Jaramillo’s sold-out book, you’re in luck, as the publisher just gave the green light for a third printing.

Who: A mother of six, Spanish artist Mersuka Dopazo makes monumental fabric collage paintings in vibrant colors. She began working in textiles after a trip to Benares, India, where she was inspired by women washing their saris in the river and laying them out to dry. She returns regularly to India to teach schoolchildren art, and has incorporated 1950s-era drawings from local kids into her works, like little Easter eggs hidden within the larger tableaux.

Why You Should Pay Attention: The works, which recall a more stylized María Berrío, stopped viewers in their tracks at the fair. “Everyone’s been saying she has this vivacity, this humanity,” Hossack told Artnet News. “They’ve been the star of the show. She’s sold incredibly well.”

Fun Fact: Dopazo met Hossack at a fair about 12 years ago. “[Dopazo] wanted to buy a painting from me, and her friend was like ‘she’s an artist,’” the dealer recalled. That’s typically the last thing a gallerist wants to hear, but when the friend pulled up photos on her cellphone, Hossack was immediately won over.

Up Next: Hossack will stage a solo show of Dopazo’s work at her London gallery early next year, and will also bring her work to Art Palm Beach in January.