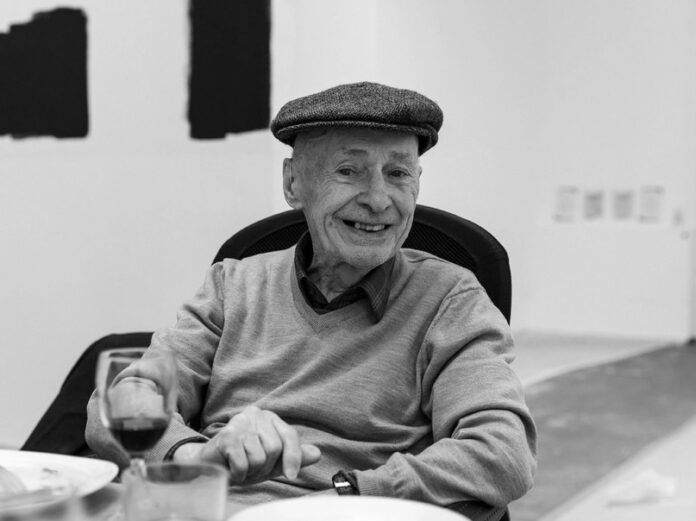 Jacques Villeglé, an artist whose work made use of torn posters spotted on the street that have influenced generations of French artists, has died at 96.

The Paris-based Galerie Georges-Philippe & Nathalie Vallois, which represents Villeglé, announced the artist’s death in a statement posted to social media on Tuesday. The gallery remembered him as “working hard, smiling always.”

Villeglé was the last living figure associated with Nouveau Réalisme, a French avant-garde movement of the late 1950s and early ’60s that sought a total merger of life and art. Its progenitors—among them César, Arman, and Niki de Saint Phalle—often made use of commercial objects and advertising, which they eyed with suspicion, while also bringing the visual language of Abstract Expressionism to the everyday.

Villeglé’s primary mode of expression during that era was the exhibition of ripped and distressed posters that he had spotted in Paris. He termed this practice décollagisme, although he was not often the one who did this tearing—that was the work of passersby, who were left anonymous.

He described his works from this era as “a whole repertory of rips, scratches, slashes, scrawls, smears, gashes, gougings, abrasions, inscriptions and over-pastings.”

Often, there was an explicitly political dimension to all this. In 1961, Villeglé made Carrefour Algérie-Evian, which shows an ad for bottled water next to sign expressing support for Algeria in its war for independence. The work was a pun: Evian was both the name of a water company and the town where negotiations for a peace treaty between France and Algeria were starting that year.

“What makes them more than that is their strange, allusive poetry: a poetry of chance and everyday life,” critic Michael Kimmelman once wrote in the New York Times. “They’re reminders of the value of keeping one’s eyes open.”

Born in 1926 in Quimper, France, Villeglé initially started out making sculptures using junk found on the beaches of Saint-Malo. During the late ’40s, Villeglé linked up with the artist Raymond Hains, who became a close friend, and the two hit upon décollagisme. Some of their initial experiments, with their emphasis on appropriated and collaged text, have been linked to the Lettrist movement.

Following the uprisings of May 1968, Villeglé began to focus on what he termed a “sociopolitical alphabet,” or a language system built using heavily stylized letters with leftist underpinnings (an A shaped like the symbol for anarchism, for example). He also continued to produce décollagiste works, relying on advertisements for musical events for one series, although in this case, Villeglé himself tore the advertisements as opposed to people on the street.

During the ’60s, Villeglé’s work gained some visibility outside France, having been included in the legendary 1961 “The Art of Assemblage” show at the Museum of Modern Art in New York. Still, he remains much better-known within his home country than he does anywhere else. In 2008, the Centre Pompidou in Paris staged a retrospective of his work.

“Thanks to the almost exclusive use of torn posters, this pioneer of urban art leaves an abundant body of work of astonishing formal richness,” the Centre Pompidou wrote on Twitter on Tuesday.

Pia Camil’s Art About Global Commerce Made Her a Star. Now, She’s Turning Her Focus to Another Kind of Exchange—Between Humans and Other Species