Home News From K-pop star visits to crying and tattooing at a low-fi auction:... 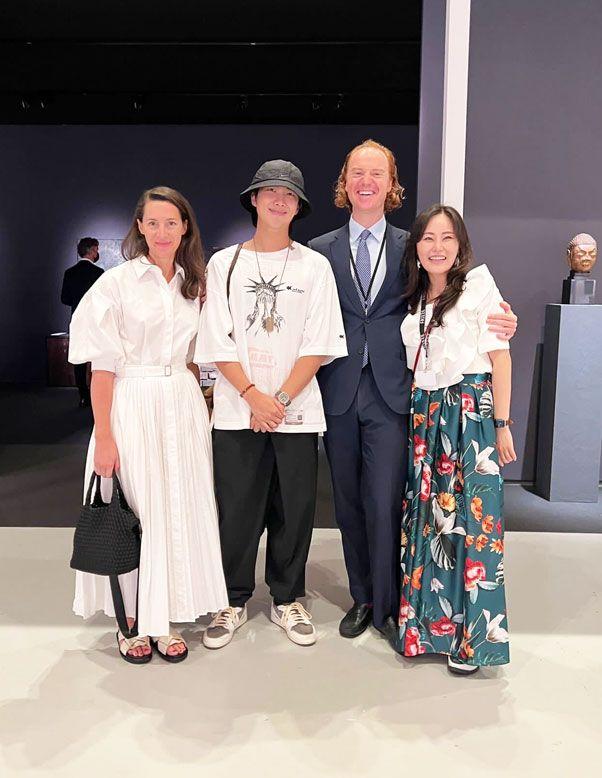 Frieze Los Angeles might have Leo and Frieze London minor royalty (by which we mean the Beckhams and Princess Eugenie), but little matches the frenzy that gripped the room when the K-pop star RM (AKA Kim Nam-joon) arrived at the fair. The BTS singer is an avid collector and patron, who is reportedly opening a museum. snapped a picture with Frieze head honchos Victoria Siddall, Nathan Clements Gillespie and Frieze Seoul head of VIP relations Minju Kim, before heading into the booth of Axel Vervoort. Away from the fair, we spotted more K-pop stars: Rosé from Blackpink was at a party held by Paradise Labs and G Dragon was mooching at a cocktail reception held in the Chanel flagship store.

Auction houses are in da house!

Western auction houses have capitalised on the buzz surrounding Frieze Week in Seoul to thrust their flag poles deeper into city’s scene, with both Christie’s and Phillips staging events (Sotheby’s is either asleep at the wheel or planning something terrifying). Christie’s is staging a non-selling show of paintings by Francis Bacon and market megawatt Adrian Ghenie (who is currently showing new drawings at Pace in Seoul). The auction house is also using the opportunity to exhibit a 1969 David Hockney painting, carrying a high estimate of £10m, which is destined for London’s October Frieze Week sales. It is first time Christie’s has exhibited an upcoming lot in Seoul. Thus far, the auction house does not have a licence to stage live sales in Korea, and its Asia Pacific president Francis Belin says that holding auctions is not likely to happen for at least a good few years. He hastens to add that since the pandemic, commercial strategies for auction houses are more multipronged than ever, with live sales no longer being a necessity for making plenty of money. Of course, that might one day change. As Belin says: “Seoul has everything—collectors, institutions, and state support. All it needs is more time.” Rome wasn’t built in a day, nor Seoul in a week.

Phillips is young at art

Meanwhile Phillips auction house has partnered with the fledgling London gallery The Artist Room to stage a selling exhibition divided into two sections: paintings by young, trendy, mostly women artists, such as Ania Hobson, and secondary market works like an Annie Morris Stack sculpture. The Artist Room’s founder, Milo Astaire (stepson of gallerist Pilar Ordovas), confirms what we all know: appetite for young artists by young collectors is tremendous here. He says that 25 people expressed interest in a painting by the 25-year-old Kristy M Chan within an hour of the show’s VIP opening. The reasons behind Phillips desire to increase its presence in the city are equally obvious. According to its private sales director Henry Highley, bids from Korean collectors at auction increased more than 250% from 2021 to 2022—virtually all of which was done online. Asked whether Phillips would now attempt to emulate the controversial strategy regularly employed by Korean auction houses to sell primary work at auction, its Asia chairman Jonathan Crockett says that it is not something that they would be averse to…

While Korea’s collectors and dealers remain bullishly enthusiastic about the effects Frieze will have on the art market, its young artists are less confident that they will reap the same rewards. In an oblique statement about this new market frenzy, the non-profit art space and local curator favourite White Noise held its first auction in collaboration with the art radio broadcast Montez Press Radio. But there were no podiums, champagne or chandelier bidding. Visitors sat on the floor while the artists presented the works around the room, like a school class show-and-tell but with beer. Works went for between £300 and £2000, with the most notable lot being a performance by the artist Rondi Park that involved her reading poetry, profusely sobbing and then tattooing the name of the winning bidder on her arm. Your move Christie’s!

According to the Austrian dealer Thaddaeus Ropac, South Korea’s impressive roster of art institutions will have a new addition next year in the form of the CNCity museum, which will focus on the historical memory and suffering of the Korean people. The museum will apparently open in the central city of Daejeon and one of its first exhibitions will be by Anselm Kiefer—Germany’s most sombre artist is a perfect fit for such a museum. And from what we hear, the market in Seoul for Kiefer’s work is booming, with virtually all paintings at his solo show at Thaddaeus Ropac gallery having sold in person on the first day. Works were priced around £1m and went to private collectors from South Korea, China and Singapore, a number of whom were new to the gallery.