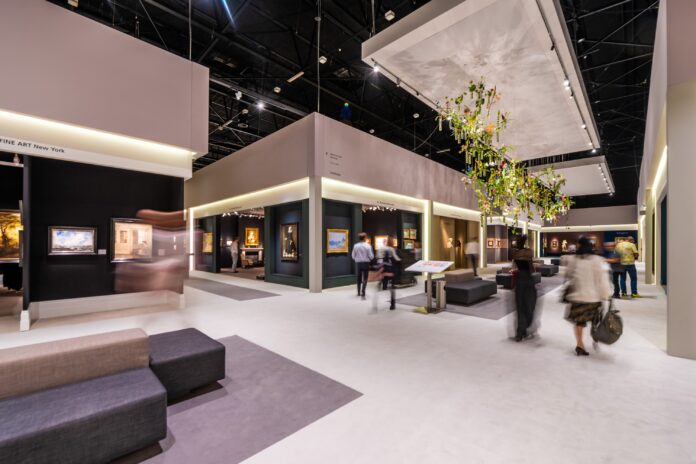 Tefaf (The European Fine Art Fair) in Maastricht is known as the pre-eminent fair for old masters and European works of art—and for its baroque fresh flower displays blossoming out of walls and overspilling banquettes placed strategically down its aisles. For the 35th edition, which opened on Friday instead of in its usual March slot, delicate flowers were displayed in slender glass vials hanging from the ceiling, presumably to save space. They were not the only things that had slimmed down. The fair has contracted from 29,500 sq. m to 22,500 sq. m and from 285 to 242 exhibitors over seven days rather than the usual 13, including previews.

The shrinkage was not the result of a lack of demand by the galleries. Many of the older art exhibitors have waited for more than two years to show at a fair, since the March 2020 edition of Tefaf was forced to shut after seven days (the outbreak of Covid at the fair heralded the start of the European lockdown).

Paul Smeets, the director of Rob Smeets Old Master Paintings and a member of Tefaf’s executive committee, explained the decision to move from March to June for this edition. “We [Tefaf] had to plan months in advance, and last autumn we thought March was too much of a risk [because of Covid],” he said. “But we thought doing a fair in 2022 was a necessity.” However, the Maastricht Exhibition and Conference Centre (MECC), which houses the fair, was fully booked. This week’s slot was only found when Maastricht University agreed to move the location of its exams, which would have taken place at the MECC.

Some exhibitors said that the long wait had resulted in a higher standard of objects at the fair. “There such a breadth of things here. The two-year gap has helped galleries to bring work of a quality here that is pretty special,” says Andreas Pampoulides, a co-founder of Lullo Pampoulides. “Just a short radius from here, there are paintings over $10m—people have definitely made a big effort to bring out the big guns.” The centrepiece of his stand is a marble sculpture of Saint Sebastian (around 1514-15) attributed to the Spanish artist Diego de Siloe, who Pampoulides calls “the first Spanish Renaissance sculptor”. It is priced at £5m.

There were, as usual, some other very highly priced works at the fair. Colnaghi is presenting an unusually large, fine “penschilderj”—a pen and ink panel painting with a gesso ground—by Willem Van de Velde the Elder, The departure of the Dutch fleet from the Vlie Roadstead, 9 June, 1645, priced at €12m. Other highlights on the stand include Luca Giordano’s Triumph of Galatea, which sold for an unspecified seven-figure sum, as well as Rodrigo de Villandrando’s intricately decorated Portrait of a Noblewoman, which found a home at six figures.

Nicholas Hall has brought a Vittore Carpaccio not seen in public since 1987, which will be included a major Carpaccio exhibition at the National Gallery of Art, Washington D.C. in November. Madonna and Child with Saints Cecilia and Barbara, painted in the 1490s and showing the influence of Giovanni Bellini, is “an eight-figure sum”, Hall says, (believed to be between $10m and $15m). It was reserved by a private collector on the preview day. Dickinson, meanwhile, brought what is probably one of the most expensive modern works at the fair, an unusual double-side painting by Giorgio de Chirico. Mercurio e i metafisici, 1920, on one side and Il Ritorno del figliol prodigo, 1924, on the other, the price was undisclosed but believed to be around €12m.

The challenge for many galleries, though, is that May and June are packed with fairs that attract blue-chip modern and old master galleries, including Tefaf’s New York edition in May, the modern section of Art Basel (16 to 19 June), Brafa in Brussels (19 to 26 June) and Masterpiece in London (30 June to 6 July). For many galleries in fields where the supply of top-quality items is severely limited (unlike primary market art galleries), and staff numbers are small compared with the contemporary mega-galleries, that has presented difficulties.

Dickinson chose three of the five fairs—Tefaf New York, Tefaf Maastricht and Masterpiece. “We have had to three fairs in seven weeks, including a trip across the Atlantic. It’s not been easy to produce different sets of inventory—Maastricht and Masterpiece overlap, so they have to be completely different,” says Emma Ward, the managing director at Dickinson. “The pandemic has also made it more difficult for us to resupply because we were so restricted in travelling,” she added.

The Tefaf/Masterpiece clash in particular forced galleries to make decisions. Some, like Agnews and Axel Vervoordt, chose only to do Maastricht. Some, like Osborne Samuel and Charles Ede, decided to do both. A few—like Offer Waterman and Adrian Sassoon—chose Masterpiece. Most dealers agreed that the biggest casualty was probably Brafa, which is normally at the start of the year.

The concertinaed dates meant there were concerns about the number of collectors and museums that would attend, especially Americans facing a three-week European sojourn if they decide to take in Art Basel, Tefaf and Masterpiece. Asian buyers were expected to be largely absent, a result of the latest wave of Covid which some said also had an impact on the number of older European collectors present.

Although there were sales on the preview day, several dealers said they were slower than usual (the fair declined to release visitor numbers). For anyone more used to contemporary art fairs such as Art Basel and Frieze it was unusual to see first-timer White Cube—known for its championing of the YBAs in the 1990s—without a feeding frenzy around it. (A senior gallery director, Mathieu Paris, did report first day sales, though, including a sculpture by Antony Gormley, HOVE [2014], priced at £500,000).

The lack of crowds did, however, make for a tranquil atmosphere for serious buyers. Meanwhile, museum directors, specialist curators and patrons’ groups—a vital feature of Tefaf—turned up in force. Representatives of almost 100 were at the fair, including deep-pocketed US museums such as the Metropolitan Museum, the Getty, the Morgan Library Museum and the Art Institute of Chicago.

Jean-François Heim has brought an affecting Artemisia Gentileschi, Self Portrait of the artist as Cleopatra on her deathbed, clasping a viper, around 1620. Cleopatra was believed to be around 40 when she committed suicide, but in this image, she is a glowing but troubled woman in her late teens or early 20s. It is priced at €7.5m.

Bijl-Van Urk had brough two paintings by Dutch baroque artist Michaelina Wautier. One, Head of a Boy (around 1660), had sold for between €1m and €2m on the opening day. Another—Portrait Historié of a Man as Jacob, Husband of Rachel (1655-60), priced at €1.75m—was still available. Richard Green brought a still life by Rachel Ruysch, dated 1753, priced at £2m. Senior researcher Susan Morris said there was “quite a bit of interest” on the opening day, spurred in part by a planned Ruysch exhibition at the Museum of Fine Arts Boston and Toledo Museum of Art.

Rob Smeets Old Master Paintings brought a miniature painting by Giovanna Garzoni, The Virgin of the Chair (1649), which was bought on the opening day by an US private buyer for an undisclosed sum. A rare drawing by Lavinia Fontana (1552-1614) was on hold for a US museum. “Everyone wants something by female old masters now,” Paul Smeets says. “The danger is buying something [of] secondary [quality], so you are in a good place if you can bring something of great quality.”

Several dealers referred to the increasing competition of the big auction houses in the older art field, particularly Sotheby’s, Christie’s and Bonhams. This only intensified in the pandemic, with their big brand names, huge marketing budgets and rapid adoption of online sales platforms. Earlier this month, Christie’s Paris realised €114m, more than double the pre-sale low estimate, for the collection of the late fashion designer Hubert de Givenchy which was dominated by 18th century works of art, sculpture and furniture.

“There’s always a lot of competition from the auctions,” says Jorge Coll, the chief executive of Colnaghi. “But in narrow fields like ours, we need each other. The auctions are needed because they establish a market in a public way: we need those auction records. But they need us, because we are a big part of their customer base. And they can’t dedicated the time and effort to individual works that we do.”

Most galleries made it clear that they hoped the fair would move back in 2023 to its regular slot—not least because the MECC in June proved uncomfortably hot. Nevertheless, they were happy to be doing fairs again. Tom Davies, a director at Daniel Katz Gallery, which had brought art ranging from antiquities to 19th-century paintings, says: “It’s great seeing the fair again. We have spent two years watching contemporary art get ever more expensive and the auction houses take more and more prominence. If you look at the quality of material here, it’s like putting up a flagpole in the art market, saying look at what we—the gallerists—have.”