Home News Future of ArtPrize, the biggest contemporary art contest in the US, uncertain... 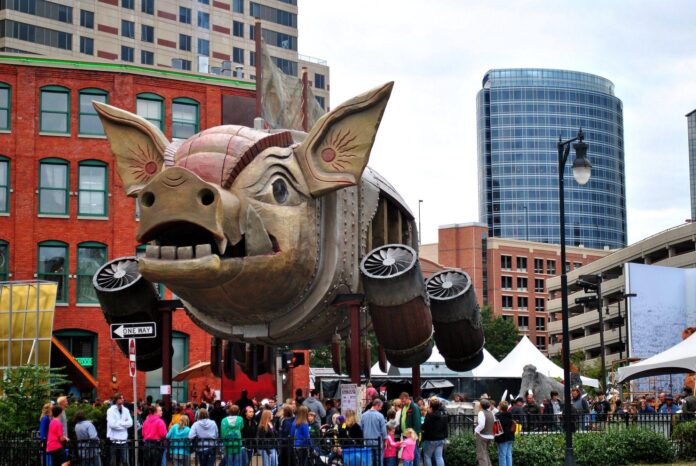 The board of ArtPrize, the juried international contemporary art competition held in Grand Rapids, Michigan, has disbanded, leaving the fate of the organisation uncertain. The group is handing all operations over to a new partnership of public and private entities that will form “ArtPrize 2.0”, a “new experiment that will build upon the legacy of the international art competition”, according to a statement from ArtPrize.

Founded in 2009 by tech entrepreneur Rick DeVos—son of former US secretary of education Betsy DeVos—ArtPrize famously embraced a populist spirit, with winners decided by a jury and by public vote. It quickly grew to be a beloved event, drawing thousands of visitors to Grand Rapids every year. Plus, it offered artists major winnings: the grand prize for many years was $250,000, with $100,000 awarded to the second-place winner and $50,000 to third place. But the Covid-19 pandemic put a dent in those earnings, with the grand prize dropping to $50,000 in 2021. This year, ArtPrize did not offer any grand prize money, although it handed out $450,000 in several smaller awards.

“What started as an experiment in 2009 quickly became something more, and we have an entire community to thank for embracing the ArtPrize idea and taking it to amazing heights,” Rick DeVos said in the statement. “Together, we were able to stimulate thought and creativity by celebrating art, supporting artists, exploring familiar and not-so-familiar venues and starting entirely new conversations. While there are certainly mixed emotions, we know the time is right to conclude the original ArtPrize experiment and open up space for new energy and creativity.”

ArtPrize 2.0 will be managed by Downtown Grand Rapids Inc., the city of Grand Rapids and Kendall College of Art and Design of Ferris State University. The groups did not share any details of their plans but will be producing a “fall event”, according to the statement.

“The folks who are now responsible for it and the organisations who will chart the future, I was really pleased to see it,” Dale Robertson, president and chief executive of the Grand Rapids Public Museum (a perennial ArtPrize venue), told MLive.com. “I have great respect, so it’s like seeing three of your closest friends taking something over and I’m just cheering for them. Wherever it goes and what path they come up with, we should all feel really good that it’s in good hands.”