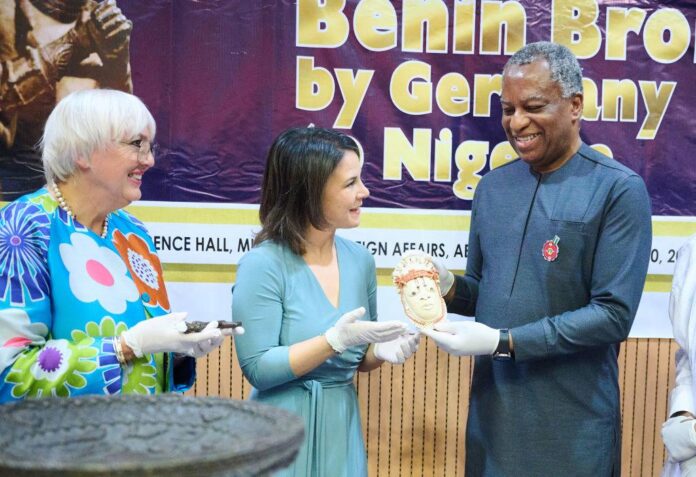 Twenty-one Benin bronzes held by German museums were returned to Nigeria yesterday in an official handover ceremony in the administrative capital of Abuja. The move follows last year’s announcement by Germany’s culture minister that the country intended to repatriate the sculptures.

German foreign minister Annalena Baerbock handed over the stolen bronzes in a gesture that was symbolic, as the works have belonged to the African nation ever since a memorandum was signed by the two countries on July 1 of this year. 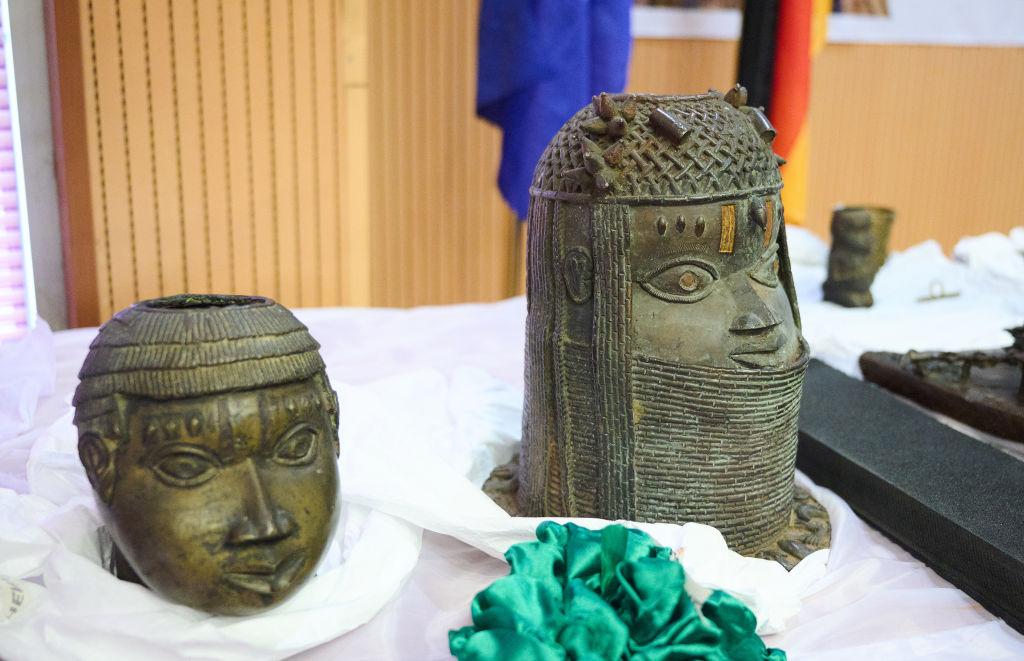 A trophy head (left) and the commemorative head of a king (right) are among the objects being returned to Nigeria. (Photo by Annette Riedl/picture alliance via Getty Images).

The items included a brass head of a Benin king or and a ceremonial sword known as an . Plans to open the Edo Museum of West African Art and a special pavilion for the display of the Benin Bronzes are still in the works.

“It was wrong to take the bronzes, and it was wrong to keep them for 12 years,” Baerbock stated, according to a report in the New York Times. “More of these agreements will follow and this moment is also historic to us. We are facing up to our history of colonialism.”

Over 1,000 of these objects ended up in German museums following their purchase from British colonialists who had stolen the precious artifacts during a violent raid of the former Kingdom of Benin in 1897.

Over a century later, the works are making their way back to Africa, slowly changing hands so as not to overwhelm Nigeria’s storage facilities and to give Germany more opportunities to exhibit them. Shortly after the July 1 agreement, Berlin’s museums initiated proceedings to return their bronzes, although some will remain in Germany as long-term loans.

A similar compromise was struck between Nigeria and Cologne. Just last week, the German city confirmed that it is also repatriating 92 bronzes, of which about 40 will remain in the country for the time being.

The U.S. has also played its part this year, restituting bronzes from the Smithsonian Institution‘s National Museum of African Art in Washington, DC despite some controversy.

Meanwhile, the U.K. holds an even larger collection of Benin bronzes than Germany, with some 900 at the British Museum alone. So far, however, the U.K. government has stalled repatriation efforts, which has created a sense of frustration that was freely expressed at the ceremony. The British Museum Act of 1963 forbids the museum from disposing of its collection apart from under very specific conditions.

“Britain has most of the works, and we thought they would provide leadership,” said the governor of Edo state Godwin Obaseki, according to the Guardian. “They were the ones who came here and destroyed the empire, they were the ones who looted pieces from here, and they should be leading in restitution.”

Although 72 bronzes were returned to Nigeria this year from the Horniman Museum in London, Nigeria’s culture minister Lai Mohammed claimed he had hit a “brick wall” with the British Museum.