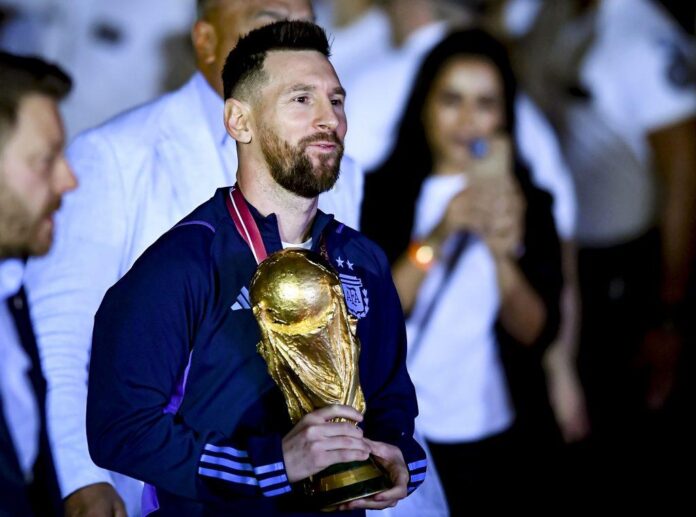 After racking up 67 million likes within hours of debuting two days ago, Messi’s image carousel is now the most-liked post on Instagram, unseating the @world_record_egg’s record of nearly 58 million likes, which itself overtook Kylie Jenner’s one-time record of 19 million likes for her photograph of her newborn daughter in 2019.

By comparison, Sam Umtiti, a star player who helped France win the World Cup in 2021, only got about 640,000 likes on his trophy post. Messi, on the other hand, has the whole platform’s third-most followed account, ousted only by Instagram’s own account and Cristiano Ronaldo.

“We demonstrated once again that when Argentines fight together and unite we are capable of achieving what we set out to do,” Messi wrote in his caption. “The merit belongs to this group.”

This year marked Argentina’s third time taking the World Cup. Their first was in 1978, followed by 1986, led by legendary player Diego Maradonna. The 2022 tournament saw Messi score two goals in the championship in the 35-year-old’s final World Cup appearance. The suspenseful, overtime penalty shootout that cinched Argentina’s victory against France has secured its place in history alongside Messi’s post—two much-appreciated reasons to celebrate amid Argentina’s ongoing political and economic strife.

Ruminating on the World Record Egg in 2019, Ben Davis noted its rise served as “a kind of collective self-portrait” wherein anonymous users are simultaneously united and defined by a social media popularity contest.

Football is a similarly unifying force on the platform, evidenced by the sport’s reign over Instagram’s greater list of 20 most-liked posts. Ten entries center around the World Cup. Messi alone holds eight spots, posted before, during, and after the tournament. On @world_record_egg’s one and only post, sports fans have also been leaving comments such as “Messi 70 Million” and emojis of the Argentinian flag.

Argentina’s team returned home on Tuesday, which was declared a national holiday. Fans swarmed the Obelisk at the center of Buenos Aires that the players’ parade couldn’t complete its route down the avenue. “I am proud of the work they did,” Coach Lionel Scaloni said on the scene. “I want to tell people to enjoy—it’s a historic moment for our country.”

What I Buy and Why: ‘Avatar’ Star CCH Pounder on Building a Collection of More Than 500 Works by Caribbean and African Diasporic Artists