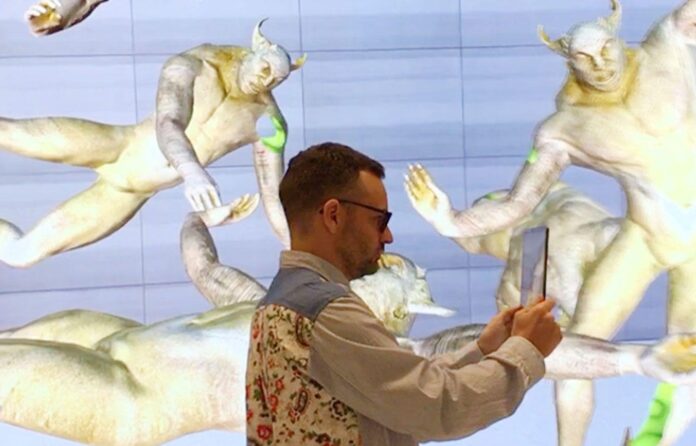 The monstrous, nightmarish figure in William Blake’s The Ghost of a Flea (around 1819-20) has come to life in central London. United Visions, a new augmented reality (AR) experience created for California’s Getty Museum was launched on the App Store on 26 July and will be shown to the public for the first time at the newest Apple Store, in Brompton Road, on 28 July.

Five or six animated three-dimensional recreations of Blake’s figures gyrated and flew, life size at one moment, larger at another around the Apple store’s mirror-ceilinged auditorium. Suddenly, the group atomised and reappeared as a towering, solo “Flea” figure that stood around 3m tall in front of the audience. Its head transformed first into the adamantine St John the Evangelist eagle of Blake’s watercolour Beatrice Addressing Dante from the Car (1824-27) and then again into the “burning bright” head of Blake’s poem The Tyger (1794). A group of three serpents then looped and jived like battling kites around the dancing central figure in interlocking spirals before everything collided and shattered into fragments, releasing the audience from the grip of Blake’s darkest imaginings.

The Getty Museum holds one of three surviving examples of Blake’s Satan Exulting over Eve (1795), with one of Blake’s most memorable serpents. Its threatening eyes seem to be present in the battling serpents of United Visions. The museum’s Blake exhibition—a development of Tate Britain’s 2019 retrospective—is scheduled to open in autumn 2023, after the Covid-19 pandemic delayed its initial planned opening scheduled for July 2020.

“Blake inspired so many artists around the world,” Nguyen said at the launch of United Visions. He described how he and Cutting took a deep dive into the artist’s work at the beginning of the project—”It drove us pretty much mad!”—and found what connected them with the artist. It was, he said, “this idea of light and dark [that] are inherently connected […] in a dynamic union”. Nguyen referred to Blake’s celebrated visions which he saw as “the mind creating in order to bring imagination into the world”. And, he said: “augmented reality is just that sort of medium.”

Nguyen and Cutting created their Blake figures, applied them to motion capture—the first take of the dance—and sent these visuals to Just Blaze. Just Blaze sent back his spellbinding soundtrack, with its building beat, layered with readings of Blake’s poetry. The Tyger is voiced by Just Blaze’s son, Solomon Smith, with additional chopped-up lines from Blake written and spoken by the New York City-based Dominican rapper, music producer and poet, Oveous Maximus. Nguyen and Cutting rechoreographed their dancing figures to fit Just Blaze’s hypnotic sound track and sent it back to him. “We had this really up-tempo track,” Just Blaze said, “but we needed to darken it. So I called up a violinist and cellist friend.”

Just Blaze said he was attracted to the Getty Museum project by the seriousness with which Tin&Ed approach their art and by his own respect for Blake. And also because he is a “huge proponent” of AR: “one of the future story-telling genres”. He described his own introduction to Blake’s work—a story in a Spiderman comic based around The Tyger, perhaps Spiderman and Tigra (Marvel Comics, 1978)—and said he hoped that United Visions would provide a similar introduction to Blake to others. The piece, he said, brings The Tyger bang up to date, and he hopes it will be “a way to introduce people without saying: ‘Here read this book’.”

Listening to Nguyen, Cutting and Just Blaze describing their process was a reminder of how much Blake the artist was an innovator in colour etching—some of his methods still not understood—in which he layered his processes of outline, imposition and colour, much like a DJ building a soundtrack with words, rhythm and instrumentals or an artist-developer in AR pulling together motion capture, 3D modelling and surface textures.

The creation and execution of United Visions is a reminder, if one were needed, of how far Blake—a radical misunderstood in his lifetime, mythologised as a “mad genius” by those who remembered him following his death before being rescued by the extraordinary bibliographical and scholarly voyage of the past 150 years, its course set for many decades by the remarkable Geoffrey Keynes—has come to be recognised as both a writer and an artist of the first rank. But also as a keystone of popular culture, sampled and referenced by film-makers, writers, artists and now at the cutting edge of the vision machine of telling stories in augmented and virtual reality.