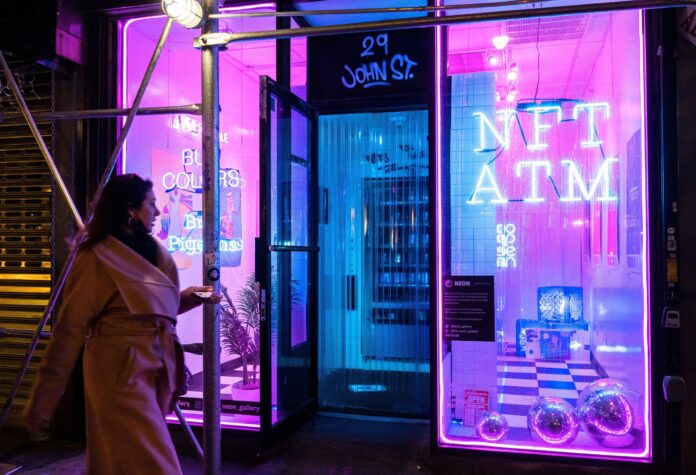 Last month, the Wall Street Journal reported that sales of NFTs were “flatlining”, citing data from NonFungible, a data analytics company that covers the industry. On the face of it, the figures look stark: active NFT wallets appear to have dropped 88%—from 119,000 to 14,000—since September last year, and individual sales have dropped from a daily average of 225,000 to 19,000, a precipitous 92%. Worse, buyers are dwarfed by sellers by something like five to one.

A collapse on this scale would be a severe blow to an industry that in 2021 saw over $17bn change hands, fuelling the hopes and dreams of thousands of artists who saw the technology as a means to finally profit from their otherwise infinitely reproducible digital art. It would also be a travesty for the collectors who were hoping to resell for a quick buck: the Wall Street Journal chronicles the travails of one Sina Estavi, who bought a screenshot of a Jack Dorsey tweet for $2.9m in March 2021 but can no longer attract a bid over $14,000. (He’s still holding out, though—good for him.)

The problem is that these data do not provide the full story. For a start, as NonFungible pointed out, the figures used were from the Q1 report and we are now approaching Q2; things have changed, not least with a series of new, lucrative collections like Moonbirds and Otherside. (NonFungible also insisted its figures were “conservative”.)

More pertinently, NFTs are a vast and diverse asset class that defy attempts to explain their value in terms of one set of market principles. Sometimes they behave like assets in the traditional art market, with one-off pieces and collections produced by popular artists going for exorbitant sums based on a heady combination of perceived prestige and faith in an even more exorbitant resale price.

But then there are the more recent groupings of NFTs: “profile-picture” avatars, such as Bored Apes, which form part of collections conferring some kind of exclusive privilege onto the holder like access to events, intellectual property, more tokens and messaging boards. These behave more like common stock, or a digital asset like Bitcoin or Ethereum.

“The value of the pieces is derived quite differently,” says Louisa Choe, an analyst at Nansen, a data firm that provides a more complex overview of the NFT markets. “Pieces such as Bored Ape Yacht Club, Doodles and Azuki are ‘social NFTs’—the core value is the identity they offer adopters.” On the other hand, she says, the value of one-off works is “derived from the popularity and recognition of the artists”.

Understanding this distinction results in a more nuanced appreciation of the market. Looking at the data, Choe observes that, since April, there has actually been a boost in NFT sales, evidenced by the increase in the ratio of wallets buying to wallets selling. (The Wall Street Journal did not make this distinction.) While there has been some sell-off in cheaper tokens, she says, the data suggests that the sellers are not abandoning the market but simply moving from one kind of NFT—the riskier “drops” by popular artists—onto better established collections that look like a safer bet. Choe says that these social NFTs now command an 83% share of the NFT market; that’s why she calls them “blue chips”. It’s not dissimilar to the moves seen in the wider tech markets, which have been roiled by higher interest rates.

Sam Williams, the chief executive of the decentralised NFT database Arweave, says that collections look safer to investors because they are able to draw in more liquidity—that is, more potential buyers and sellers. One-off works generate huge supplies of buzz in the hope of attracting new buyers looking for a profitable resale, but over time that buzz will draw down as the new fad overtakes it—unless the work is an earth-shattering masterpiece or has some historical significance. That is what makes these works “non-fungible”: each is unique and there is no equivalent you can trade it for. If the buzz fades, you’ll probably never find a buyer and you’ll be stuck with an attractive waste of money (unless you just like the art!) It also makes reliable data hard to find: how, for instance, is a digital work with neither buyers nor sellers valued at all? The prevalence of private, proprietary auction houses and the phenomenon of wash trading, in which holders trade with themselves, doesn’t help either.

NFT collectibles, on the other hand, behave almost like regular assets. Bored Apes, for instance, muster large, devoted communities of holders of these mostly interchangeable primates, guaranteeing some degree of liquidity. “Those collections where there is a large community and many tokens have a slightly more ‘fungible’ market structure,” Williams says. He explains that this is why the value of NFT collections is often determined by a “floor price”—that is, the cheapest available of a given set. “People tend to be willing to buy whichever the cheapest one is, as long as they ‘have a Bored Ape’,” he says. (This is also why very few holders even pretend to care about the quality or, say, dialectical significance of the art.)

All this means that the Wall Street Journal wasn’t exactly wrong to note a decline in the value of certain NFTs. But in reality the punters have merely swapped one casino for another, moving from the auction house to the trading floor.

As Unesco pledges $350,000 to safeguard sites, questions are raised about the country’s long-term commitment to restoring and protecting key locations in the face of the climate crisis