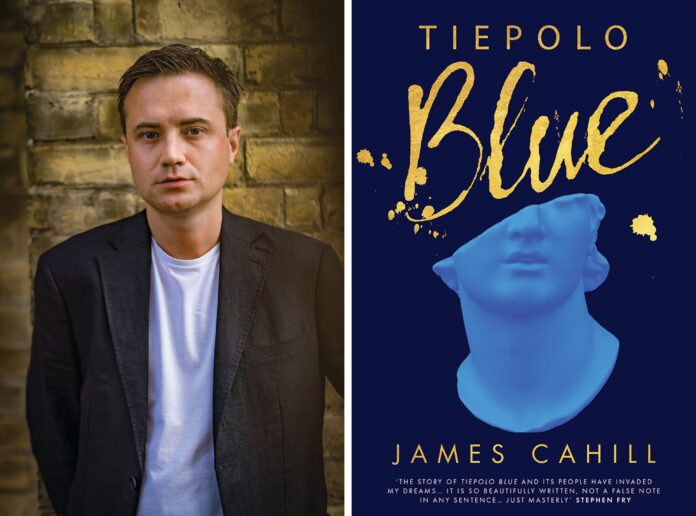 Pickled sharks, stuffed tights, and a crumpled and stained bed: the anarchic found objects of the Young British Artists (YBAs) changed art in the UK forever. In Tiepolo Blue, an absorbing coming-of-age story that charts the artistic and sexual awakening of a Cambridge professor in 1990s London, they collide with the classical forms of the Italian Old Masters. We spoke to the book’s author, James Cahill, who has spent the past decade working in both the art world and academia, about the shock of the new, the relationship between art history and creative writing, and his titular Venetian master.

The Art Newspaper: Where did the idea for Tiepolo Blue come from?

James Cahill: It started with the main character, Don. I had this image of a man who was mid-career, mid-life, brilliantly successful and renowned, but also fatally hamstrung by his inexperience of love and life and things beyond his academic métier. He was a certain kind of man in a certain kind of setting—a rarefied, closed academic world—with very fixed ideas about art and beauty. I suppose it was partly because I’d been writing my PhD thesis in Cambridge and, as we all know, there are people like this. I began to think about what it might be like for someone locked inside that kind of identity to break out of their old life into something bracing and different.

There is a clash of two worlds in the novel: the classical and the contemporary. What inspired you to explore the space in between?

My thesis looked at contemporary art in Britain in the late 20th century in relation to classical statues and myths, and their sort of strange, trans-historical relationship. That filtered into the creation of the story in terms of what interests and values this man would have, and how they could be affronted. I decided that he would be an art historian at an elite university at the end of the 20th century, when some ingrained traditions were still alive but things were beginning to change. Then I thought about the explosion of new art in the 1990s and how that might catalyse a plot.

Don is consumed by the skies of Giovanni Battista Tiepolo. What is your relationship with the Venetian master?

I can’t remember when I first saw a Tiepolo painting, but I’ve loved those incredible vast ceiling frescoes full of swirling bodies for a long time, and the distinctive shade of blue that he uses—that mid-turquoise, a blue that seems to have a mistiness to it, like the traces of clouds. When I was young, I had an ambition or at least a desire to be an artist myself. I got as far as applying for a foundation course before I went to the Courtauld [Institute of Art]. I kept making work in a private and informal way, and one idea I had but never realised was to collage together a whole load of pieces of blue from reproductions of Tiepolo paintings to make a single variegated panel—something that happens in the book. I never did it in the end, so perhaps it was destined to be a fictional conceit rather than something that I literally created.

Don sees the world through an art historian’s eyes, and at one point the enigmatic young artist, Ben, says to him: “It’s possible to be too discriminating… You stop seeing the thing for what it is.” In writing the book, did you have to consciously stop thinking as an academic and start thinking as a novelist?

Yes, because art history and creative writing are entirely different disciplines. At its best, academic writing is brilliant and sparkling and inspiring, but at its worst it can turn people away from the very ideas that it’s trying to expound. In some ways, I had to draw quite a careful distinction between academic writing and research, and what I was doing creatively. You wouldn’t want to start writing a novel in the mode of an academic thesis, or at least not unless it was a conscious experimental decision.

I was interested in the 1990s as a sort of fin-de-siècle moment, both as an end and as a beginning, because after that time things in British art changed dramatically. I think it’s vital that contemporary art is always in some sense moving forward or redefining the debate or challenging the terms of the argument, but back then it was almost more than that; there was this very special social world and this feeling among those artists coming out of Goldsmiths [art school] in the early 1990s that anything was possible. The art world today is much more global and there are many more opportunities for artists, but I think perhaps something has been lost as well. So, the novel talks about contemporary art, but it’s not art now—it belongs to a specific moment in time that I don’t think could be repeated.