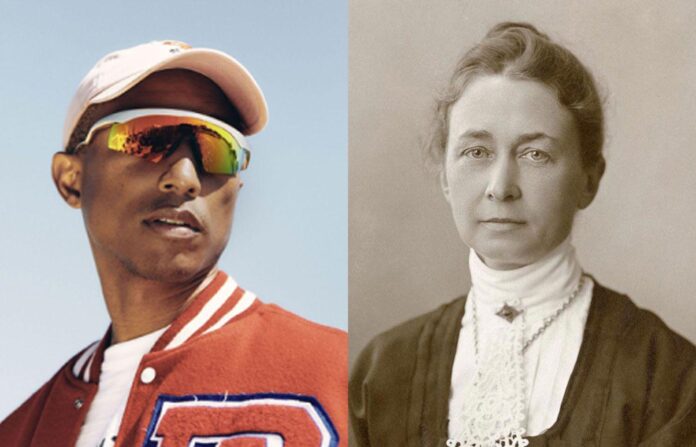 More than a century after she completed her chef d’oeuvre—193 abstract canvases known collectively as Paintings for the Temple (1906-15)—Hilma af Klint has emerged this year as a multimedia power player. Her work—graphic, colourful and deeply idiosyncratic—has demonstrated a Van Gogh-like power to generate footfall and has given rise to projects across multiple formats, from books and films to experiences in virtual and augmented reality (VR/AR).

Now, from 14 November, digital versions of all 193 of her Paintings for the Temple, created by Acute Art, will be offered as NFTs in one edition, for sale on Goda (Gallery of Digital Assets), the platform launched earlier this year by the multi-Grammy award-winning philanthropist and recording artist Pharrell Williams. A second edition of the NFTs will remain with Bokförlaget Stolpe, the publishers of the Af Klint catalogue raisonée. The originals belong to the not-for-profit Hilma af Klint Foundation in Sweden.

“Hilma af Klint was an incredible pioneer!” says Pharrell Williams. “It took us a century to fully understand. Now that we do, we need to rewrite art history! Beautiful and meaningful art truly transcends time, and Hilma af Klint’s work is a perfect example of that. We’re honoured to show her work on this platform and to truly celebrate a remarkable woman.” For KAWS, who acts as an art adviser on the Goda platform, Af Klint was a visionary. “I find it great that she finally gets the attention she deserves,” KAWS says. “During her lifetime the audience wasn’t ready but today we are. She painted for the future. She painted for us!”

The surge in demand for Hilma experiences brings back memories of the 2018 survey of her paintings at the Guggenheim Museum in New York that broke attendance records for the institution, saw 100,000 copies of the catalogue shipped worldwide, and sold out the exhibition’s artist merchandise.

Af Klint, the mystic Swedish mother of early-modern abstraction, whose pioneering work remained unrecognised in her lifetime, was featured in a series of launches in the past month: a new biography; the seventh and final volume of her catalogue raisonné; a VR experience, Hilma af Klint: The Temple; and a biopic, Hilma, which opened in UK cinemas in October.

Af Klint—who dabbled in spiritualism and automatic drawing in a group of Stockholm women artists called the Five—followed Rudolf Steiner, the philosopher of spiritual science, and the mystic Madame Blavatsky into the fashionable, well-funded Theosophical movement. She demonstrated a Theosophist’s concern with geometric and spiral forms in the mass of diagrammatic Temple pictures that she worked on after being asked at a séance in 1906 by a “High Master” to abandon her academic approach to art.

The new NFT editions and The Temple VR piece have been created by the London-based extended reality (XR) studio Acute Art, as has an AR app, Hilma af Klint Walk. Both the VR and AR pieces were showcased last month at top-flight art fairs: Frieze London and Paris+ par Art Basel. The VR work is a “dream project” for Daniel Birnbaum, the artistic director of Acute Art, who curated Hilma af Klint: Painting the Unseen at the Serpentine Galleries in London in 2016 while he was the director of the Moderna Museet in Stockholm.

“Hilma af Klint dreamt of a spiral-shaped building large enough to show her most important works, the overwhelmingly beautiful Paintings for the Temple,” Birnbaum says. “Acute Art has created digital versions of the 193 works to be acquired as NFTs. As a result the Temple will be owned by people all over the world.” The NFT project opens up a digital market for her work for the first time.

Delightfully framed and paced by Rodrigo Marques, Acute Art’s creative technologist, with an ambient soundtrack by Andrew Sheriff, the VR work takes the viewer on a dreamlike flight through Af Klint’s corkscrew spirals and gridded lattices, up and down Guggenheim-esque ramps where the artist’s brilliantly coloured paintings materialise and animate; and across a sunflower-packed island, based on a real one between Copenhagen and Malmö, where the artist once hoped to build a temple.

In December, the VR experience will be presented on the giant wraparound, ultra-high-resolution screens at the recently opened Outernet arts venue in central London. The presentation of The Temple succeeds other festival-standard VR pieces by contemporary artists such as Simon Denny and Marco Brambilla, offered free of charge to generate traffic from walk-in audiences.

Birnbaum is also the co-editor, with Kurt Almqvist, of the Af Klint catalogue raisonné, published by Stolpe. He says that he and the team at Stolpe regard the VR piece as the “eighth volume” of their monumental 1,500-work catalogue. The NFT venture is a further extension of Stolpe’s catalogue, with the publisher retaining the second NFT edition of the Temple paintings.

The new film Hilma, directed by Lasse Hallström, is a lyrically framed family affair, with the older Hilma played by his wife Lena Olin and the younger Hilma by his daughter Tora Hallström. In it, Af Klint family’s interest in mathematics, botany and nature in general is underlined, as is the Stockholm sisterhood—devoted to spiritualism, art and women’s rights—in which Af Klint thrived.

With so much new Hilma content, where does one start? Birnbaum says that the shell-like, spiral-shaped Guggenheim Museum proved itself in 2018 to be ideal for Af Klint’s paintings. (The museum’s founding curator, Hilla von Rebay, who worked closely with Frank Lloyd Wright on its design, was another Theosophist.) But he argues that VR, with its capacity to display multiple works in ever-evolving digital temples, is the medium that Af Klint’s work has long been waiting for.