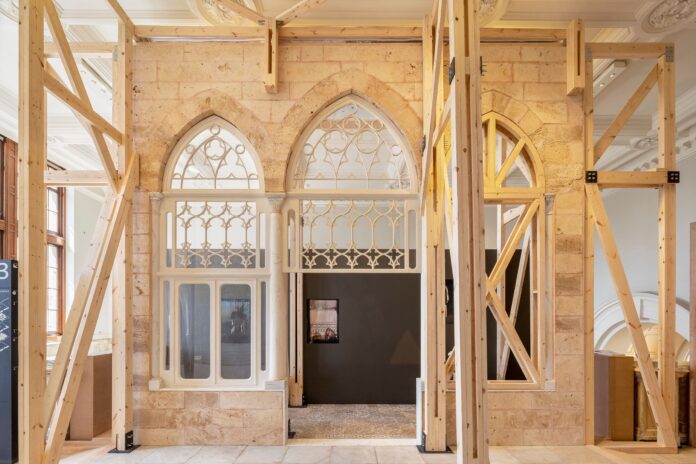 Almost two years have passed since the devastating explosion of a large cache of ammonium nitrate in Beirut Port in Lebanon. Among the toll of more than 217 deaths and 7,000 injuries, was also the damage that occurred in the nearby neighbourhoods of Gemmayzeh and Mar Mikhaël. The blast brought down entire old homes and caused immeasurable loss to the structures and facades of some of the Middle East’s most unique examples of Ottoman-Venetian 19th-century buildings.

The French-Lebanese architect Annabel Karim Kassar addresses the events by highlighting the cultural value of architectural restoration in her large-scale installation at the Victoria and Albert Museum. Titled The Lebanese House: Saving a home, Saving a City, the installation is a poetic response to the devastation, charting the architect’s personal crusade to restore one of the finest remaining examples of Ottoman-Venetian homes in Old Beirut.

Built in the museum by Beiruti craftsmen (flown over for the building of the façade), the installation’s reconstruction of the home’s most eye-catching element, the triple arcade on the façade, draws visitor’s eyes skywards. The replica aims to evoke a similar visual experience to that when wandering the cobble streets of Old Beirut.

The triple arcade façade also accompanies a seating area in the traditional liwan style, often placed in the large entrance halls of such homes. The liwan’s seating is made up of stuffed mattress-like pillows, and the low seat offers visitors an opportunity to sit down comfortably. Kassar’s installation invites viewers to contemplate and imagine the sensorial experience of being in such a home where high ceilings and suffused Mediterranean sunlight filtering in through the triple arcade’s large panes of glass evoke an experience of calmness.

Included in the installation is a digital archive for visitors to explore assorted architectural elements of old Beiruti homes, such as the balconies, cornices, timber truss roofing and plaster painted ceilings that uniquely identify a particular Lebanese architectural vernacular which has formed over the years from the influences of Byzantine, Classical, Phoenician culture and history in the old port city.

Accompanying the installation are three movies commissioned by Kassar’s architectural firm AKK. The directors Wissam Charaf and Florence Strauss present films in which they interview subjects across Beirut about the emotional impact that the explosion had on citizens from various enclaves of the city. It also charts the effect that the physical destruction of both private and public spaces has had on a country already rocked by political and economic turmoil. “We believe that by saving a building, you can save a city,” says Kassar.

Kassar’s history in preserving Beirut’s old buildings goes back to her work restoring Beirut’s old historic market district, a project she won as part of an international competition following the end of the Lebanese Civil War. Today, The Souks, a central shopping district in downtown Beirut have been integrated into Beirut’s daily commercial life and have helped to connect two sides of a city once separated by the daily fighting. The success of the architectural restoration efforts helped make Beirut a glamorous shopping and leisure destination in the region. Moreover, it serves as an example today for the governments of neighbouring countries such as Egypt, which has also begun to restore its historical marketplaces to preserve the cultural importance of these sites.

No doubt Kassar understands the importance of architectural preservation not just in her own city, but across the region: “This installation seeks to express important lessons in urban restoration and renovation that can be applied elsewhere,” she says. “That local and international communities need to be mobilised and involved directly, to protect their common urban heritage. And that restoration is not about recreating a synthetic history but about finding a new, living purpose for traditional buildings, an approach that lies at the heart of my work.”