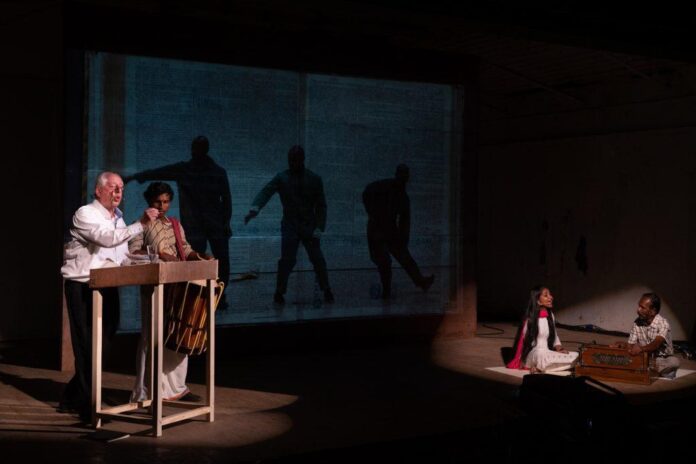 On December 15, as I rushed to find a seat at the Cochin Club for William Kentridge’s lecture-performance Ursonate—part of the Kochi-Muziris Biennale’s (KMB) s programming—a visitor from Goa called it the “non-biennale biennale.” Ironically, Ursonate, based on a 1932 Dadaist sound poem by Kurt Schwitters that uses nonsensical vocabulary, was precisely about this breakdown of meaning. At some point, Kentridge invited Indian musicians to join him—Naisha Nazar on vocals, Ashwin R on Chenda drum and Mani KJ on harmonium—but his emphatic gibberish drowned them out.

In a similar vein, at the biennale’s main venue, Aspinwall House, the hammering and installing of works was at times indistinguishable from the percussive rhythms of Asim Waqif’s new commission, Improvise, a massive resonant bamboo sculpture installed outside that visitors could play with sticks

The curator of KMB’s fifth edition, In Our Veins Flow Ink and Fire, is Singapore-based artist Shubigi Rao. In the only public art talk she gave in the lead-up to the opening now scheduled for December 23, Rao explained that song was a thread running through the biennale. “Here, song could be lament or joy. It could be humorous, snarky, or silly. As artists we are taught to take ourselves seriously and valorize our ideas. Here there’s anger, humor, embarrassment, cringe and it’s ok to have that messiness.”

That messiness was unintentionally linked to the biennale’s postponement, announced just the night before it was originally due to open, on December 12. The spaces in Aspinwall especially felt under construction, with cables clustered away from puddles, uninstalled monitors and a small village of workers holding down the fort. 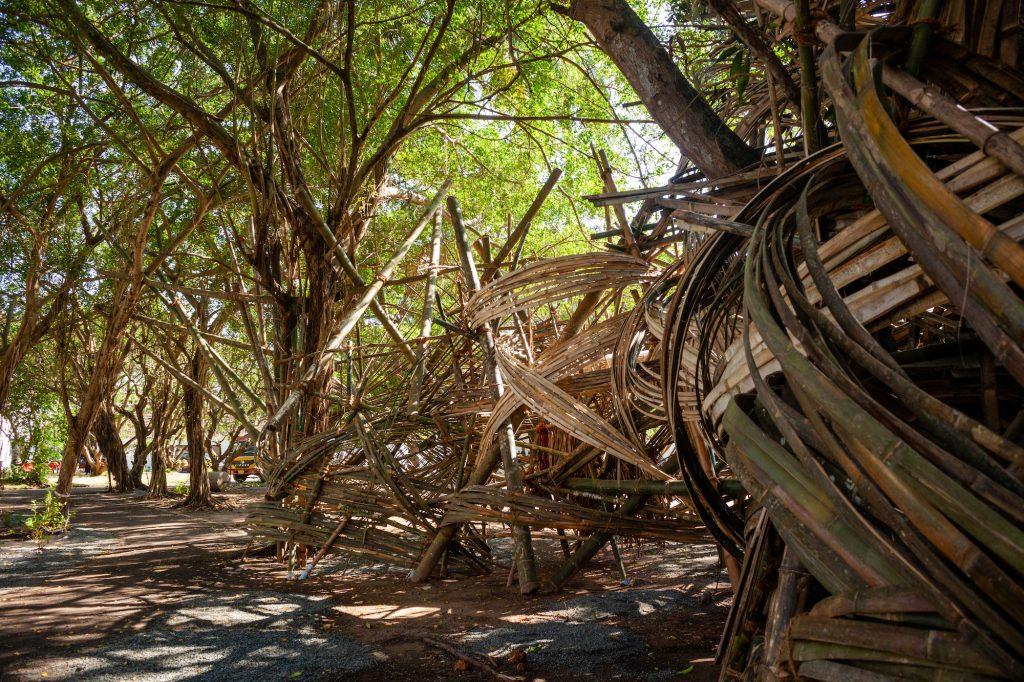 At the biennale’s main venue, Aspinwall House, Asim Waqif’s new commission, , is a massive, resonant, bamboo sculpture, that visitors can play with sticks.

Amid the ruckus, I was drawn to the sparseness of Algerian artist Massinissa Selmani’s delicate, pastel-colored drawings and videos of miniature beings and floating architectures. All trees are potential enemies (2022) evokes states of suspension, repetition and hopelessness, like his animated bird on a Sisyphean quest to fly through a birdhouse while attached to a fence.

Yet there was a certain sense of utopia as well. “When Rao invited me, it was a relief,” Selmani said. “We are often put into a box as Africans, but I’m influenced by Belgian Surrealists and my work doesn’t really speak of colonization. I like to think of minimal gestures situated between comedy and tragedy.”

An uncanny parallel to this feeling could be found in the biennale. For those of us who traveled to see the exhibition, on a press tour sponsored by BMW, a supporter from the first edition, our disappointment was met with a seemingly lighthearted approach on the ground. Artists simply got on with things, surrounded by a rallying local community.

Being from a country where people had to take matters into their own hands if they wanted basic resources, like running water or 24-hour electricity, I’m familiar with this attitude. Yet unlike in Lebanon, the issues at the biennale are less about a failed state and more about institutional hierarchies and procedures.

The Communist government of Kerala, which has been an unwavering supporter of the artist-initiated biennale—established as a foundation by Kerala-born, Mumbai-based artists Bose Krishnamachari and Riyas Komu in 2011—currently provides the largest amount given to any cultural project in India, and almost a third of the biennale’s total budget—around $845,000 out of $2.7 million. But of this, only around $360,000 has actually been received in what an institutional director termed a “promise-to-pay” method.

“It’s all just come to a head,” said Varun Gupta, director of the Chennai Photo Biennale, which has a space in KMB as part of the new Invitations programmes. “I arrived in September, and they were shooting a local-language movie for a famous actor [at Aspinwall]. When they finally got access to the venue, it was only a month ahead of launch day and they had 21 tonnes of debris to remove because of the film set that had to be torn down,” he said, adding that heavy rainfall in Kerala due to Cyclone Mandous (which hit nearby Tamil Nadu), only added to the infrastructure problems, including collapsing roofs at some heritage venues. “The rain was the straw that broke the camel’s back.” 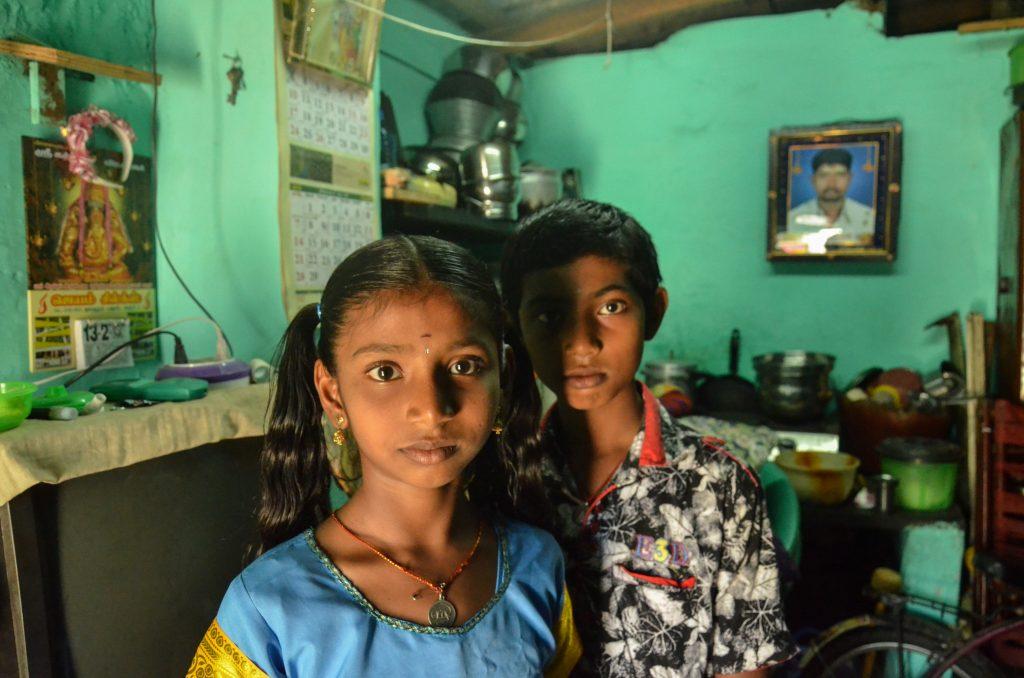 An image from the installation at the Chennai Photo Biennale.

Further complicating the situation was the ongoing friction between property giant DLF and the local government over the government’s acquisition of Aspinwall, resulting in DLF locking up the venue and barring entry for 10 days through December 1. KMB eventually had to agree to pay rent on the space because negotiations between the co-owners had reached a stalemate. “We were stuck in between and kept thinking we would get it today or tomorrow,” Krishnamachari said.

Other logistical hurdles include the need to secure bank guarantees in order to ship and release artworks from customs, which now have to be made by nationalized banks instead of private ones, adding weeks to the process, and shipment costs that have increased post-pandemic. On top of that, there are longstanding systemic issues at KMB, including Komu’s resignation due to allegations of sexual harassment in 2018, accusations of unpaid labour, and a remote style of management.

“A lot of these pressures existed before but [the biennale organizers] have managed by sheer tenacity to get it just over the line or just under the line,” said gallerist Amrita Jhaveri, who has been brought on as a new trustee of the foundation. “But they cannot do it every time—people run out of energy and goodwill. At some point, something’s going to give. I think this has to be a moment of reckoning, where something new will emerge.”

“Doing public art in India is very challenging, it’s hands-on,” Jhaveri added. “It’s very precarious, because the biennale is dependent on a temporary venue. Also, it’s one thing to have an international curator, and another for the team not to be on the ground all the time, which you need to run an event of this scale.”

The sequence of events signal a volatile relationship that exists between artists and art institutions. More accountability and transparency are necessary, perhaps especially so in places where there is less cultural infrastructure and stable sources of funding. In KMB’s case, there was emergency fundraising and a major failure in communication. While there is a certain laissez-faire or guerrilla style of operation that can be seen as endemic to the region, it doesn’t have to be that way.

“There is a rot in the art world,” Rao told me. “The work goes up because of volunteers and labor that is invisible.” 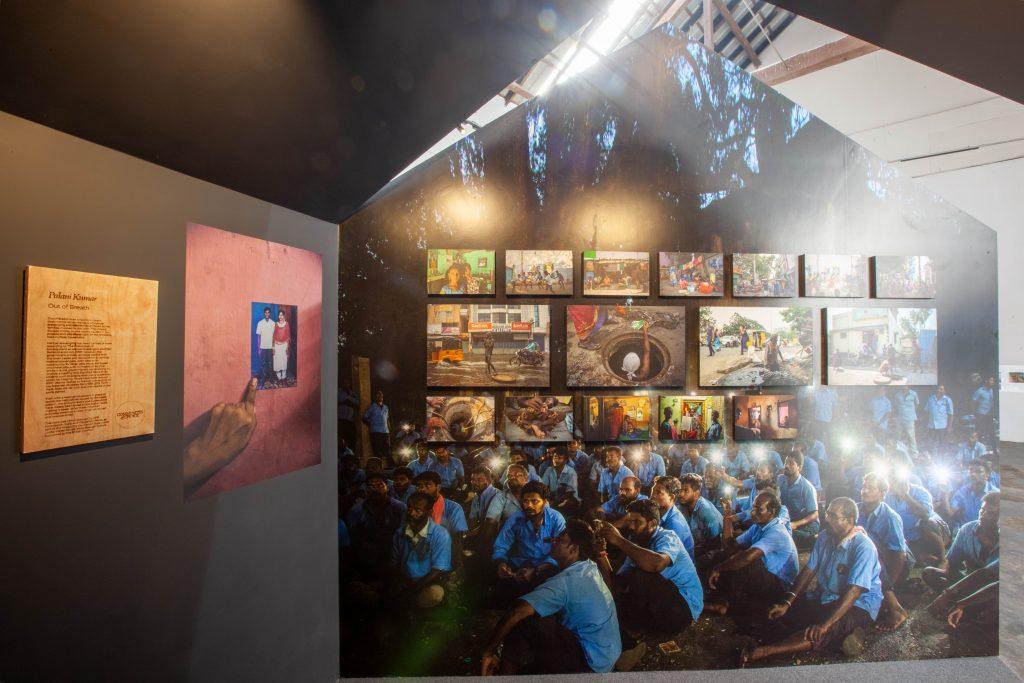 Palani Kumar documented the unsafe conditions and deaths of sanitation workers in Tamil Nadu, in a comment on caste and government-enforced labor.

The most extreme example of this was found in Gupta’s space, where Palani Kumar documented the unsafe conditions and deaths of sanitation workers in Tamil Nadu, in a comment on caste and government-enforced labor. “In these spaces, we can show challenging work that no one else will show,” Gupta said. “And the government is erudite enough not to interfere.” Gupta added: “I love that KMB has tried to bring the Global South together in this edition, which they haven’t done in the past, by sending invitations to other institutions.”

Nearby, the Kiran Museum of Art was invited to host the exhibition Tangled Hierarchy 2, organized by the artist Jitish Kallat, curator of KMB in 2014. The thoughtful show stems from a meeting between Mahatma Gandhi and Lord Mountbatten in 1947, before the controversial Partition of the subcontinent. Because he had taken a vow of silence, Gandhi communicated with Mountbatten by writing on the back of a series of envelopes. Alongside the show is Kallat’s installation, Covering Letter, which features the words Gandhi wrote to Hitler before World War II, dissolving in a waterfall of smoke.

At Pepper House, Pakistani artist Seher Shah’s work felt like a very different comment on estrangement and the unseen. Simply wrought compositions, Notes from a City Unknown (2021) were odes to Delhi, with each screenprint combining abstract architectural forms with text. In City of Forgotten Languages, she writes about a solitary bird forgetting its own song, and needing “a memory to remember how to sing.” Back at Aspinwall, the late Madiha Aijaz’s vivid photographs documenting language, devotion and intimacy in Karachi, could be gleaned beneath polythene sheets. 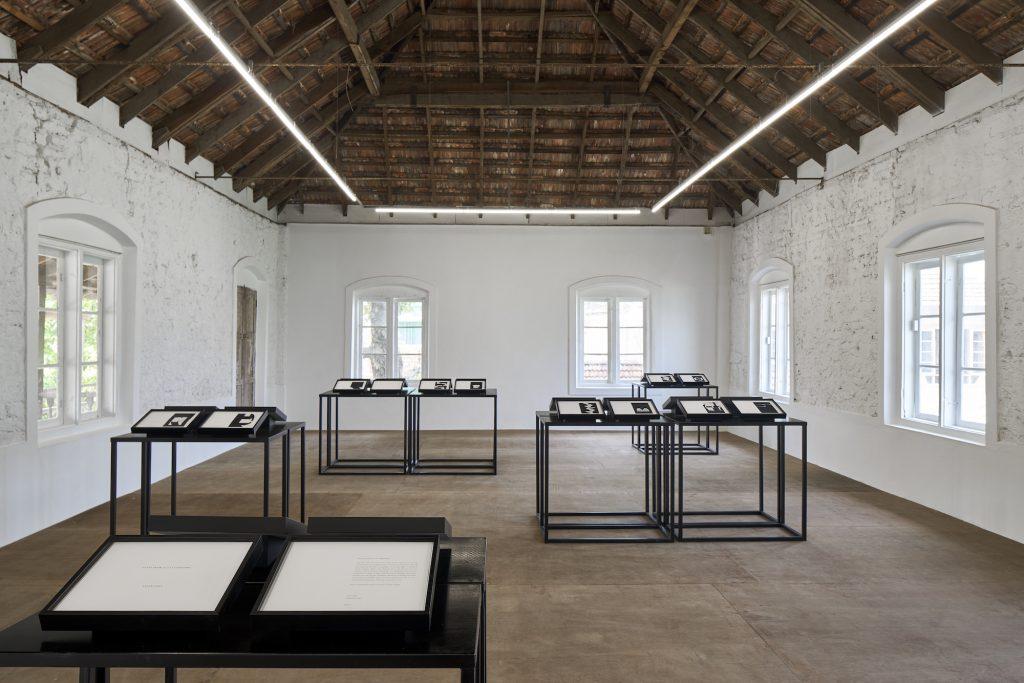 “When I curated this biennale, I looked at artists that people might think of as raw, with an unfiltered approach to specific problems in regions that are nevertheless universally understood,” Rao said during her talk.

KMB feels like a political necessity in a country with a Hindu majority rule and an antagonistic relationship to the arts.

I left Kochi a bit disheartened that I didn’t see the biennale in its entirety, although it’s not every day that collateral events take precedence. One example was the excellent work at the Student Biennale curated by seven artists, which has been running in parallel to KMB for several years and really gives visitors a sense of the concerns of the artists working in the country, from the agrarian revolts to the Dalit community, the lowest stratum of the traditional caste system. Being with without, curated by Suvani Suri at the Students Biennale, was especially memorable and relevant, looking at states of negation and new ways of listening.

If there’s anything that this edition of the biennale has revealed, it’s that artists don’t function autonomously and there’s an unspoken precarity that exists between ambitious art projects and the organizational structures around them.