Home News I Visited New York’s Immersive Klimt Spectacular With One of the World’s... 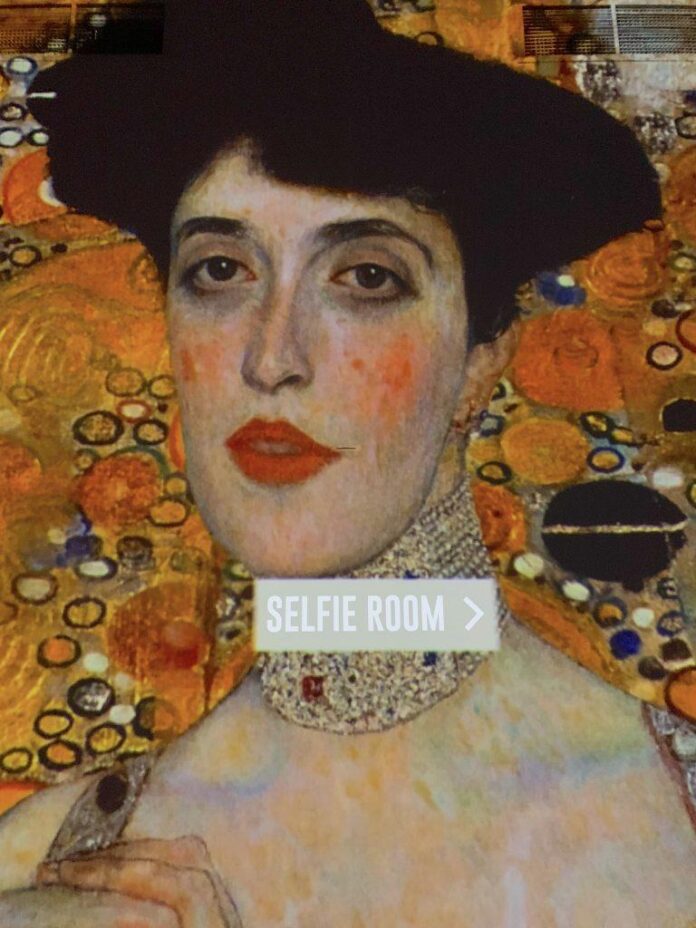 What would a true expert in the work of Gustav Klimt think of an immersive Klimt show? Would they see it differently than I do, or see things I don’t? These questions passed through my mind while sitting through “Gustav Klimt: Gold in Motion,” the Klimt experience at the New York’s Hall des Lumières that opened earlier this year in the old Emigrant Savings Bank near City Hall Park.

And that’s why I decided to call Jane Kallir.

Founded by Jane’s grandfather, Otto Kallir (1894-1978), the family gallery, Galerie St. Etienne, gave both Klimt and his co-Successionist Egon Schiele their first solo shows in the United States (in 1959 and 1941, respectively). While it closed its commercial exhibition space in 2021, the Galerie St. Etienne archives are hosted by the separate Kallir Research Institute, a non-profit which continues its work today.

And Jane continues to further the research on the artists associated with the gallery. Writing in the earlier this year, Kallir reviewed Google Arts & Culture’s online Klimt initiative, and assessed the attempt to recreate some lost Klimt paintings using Artificial Intelligence—so she has more than a passing interesting in thinking about how this type of art translates into the digital.

“Gold in Motion” follows the formula of other artist-themed projection spectacles such as the astronomically popular “Immersive van Gogh.” That makes sense, because the new permanent Hall des Lumières immersive-art center comes from the people behind the Paris-based Atelier des Lumières, which staged the “Van Gogh, Starry Night experience that touched off last year’s major immersive Van Gogh trend after it was featured in the Netflix show . 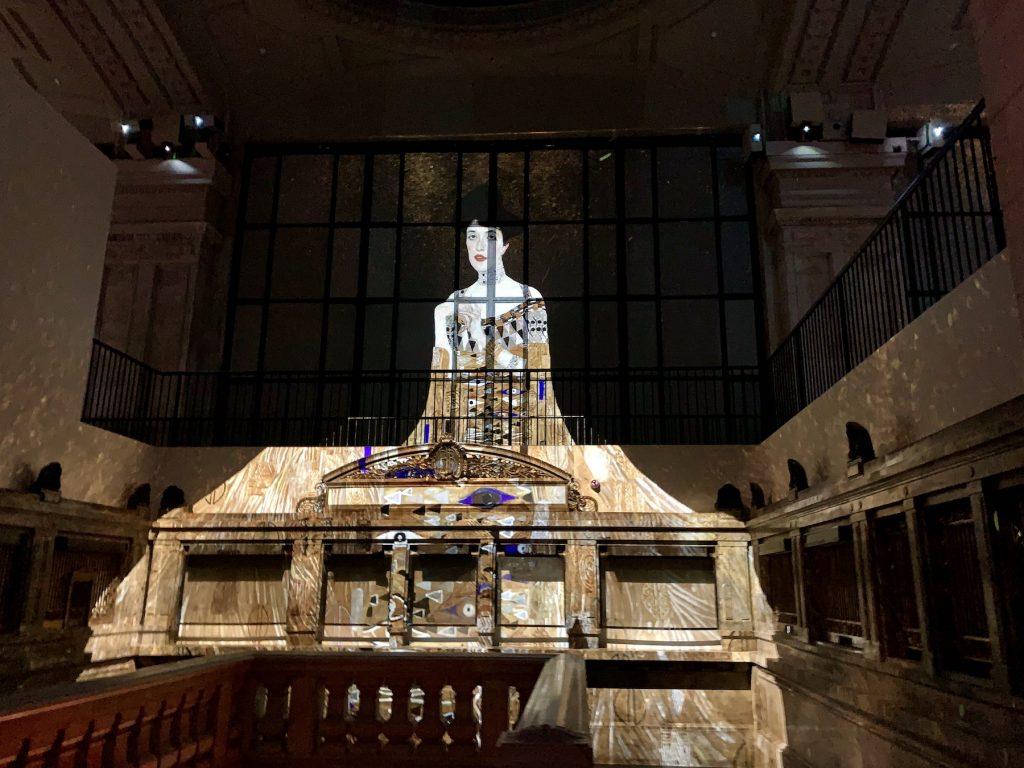 Clocking in at about a half hour, this “multi-sensory celebration of Klimt’s most iconic work” gives us a dreamy sequences of Klimt paintings, blown up and projected across the walls, floors, and pillars of the former bank’s grand marble hall as well as a second underground space. Each image gets a few seconds before you are whisked on to the next, even as it is repeated all around you on various surfaces, at larger and smaller sizes, or isolating different fragments. Often images are animated so that details appear one after another or swim around to find their place. Sometimes landscapes unroll like pop-up books. Stately classical music accompanies it all.

I found “Gold in Motion” perfectly enjoyable, if also pretty forgettable. What would Kallir think?

“First of all, the quality of the base digital images that they’re working from is really all over the map,” Kallir noted.

Klimt’s art is known for its rich materials and intricate details. At the Hall des Lumières, the projections throw the images around you at many times their actual scale, which makes you feel like you are inside a constantly shifting gallery of giant, magical paintings. 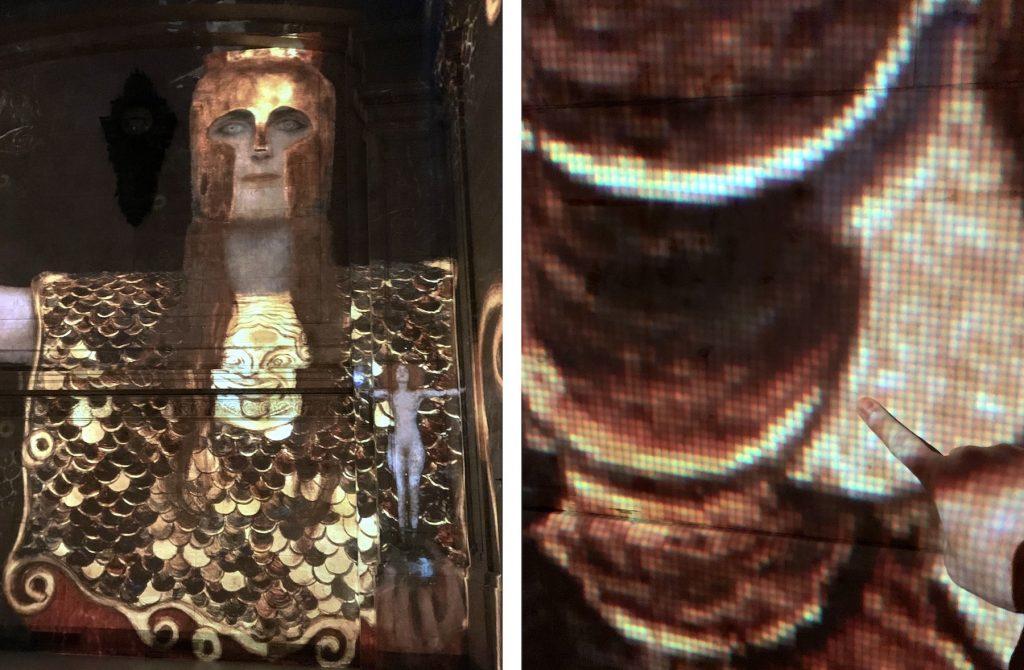 Left: Projection of Gustav Klimt’s in “Gustav Klimt: Gold in Motion”; right: detail of the armor seen up close. Photo by Ben Davis.

That scale comes with a price. In person, if you are closer than 10 feet or so to any of the projections, the image blurs a bit. You can see the individual pixels that make up the image, Klimt’s rich surfaces disintegrating into blocky mosaics.

“Gold in Motion” expects its viewers to let the images wash over them or to use the spectacle as a photo backdrop rather than scrutinizing the specific projections too deeply. But once you notice what the images look like up close, it’s difficult not to think about it as you walk around the space. 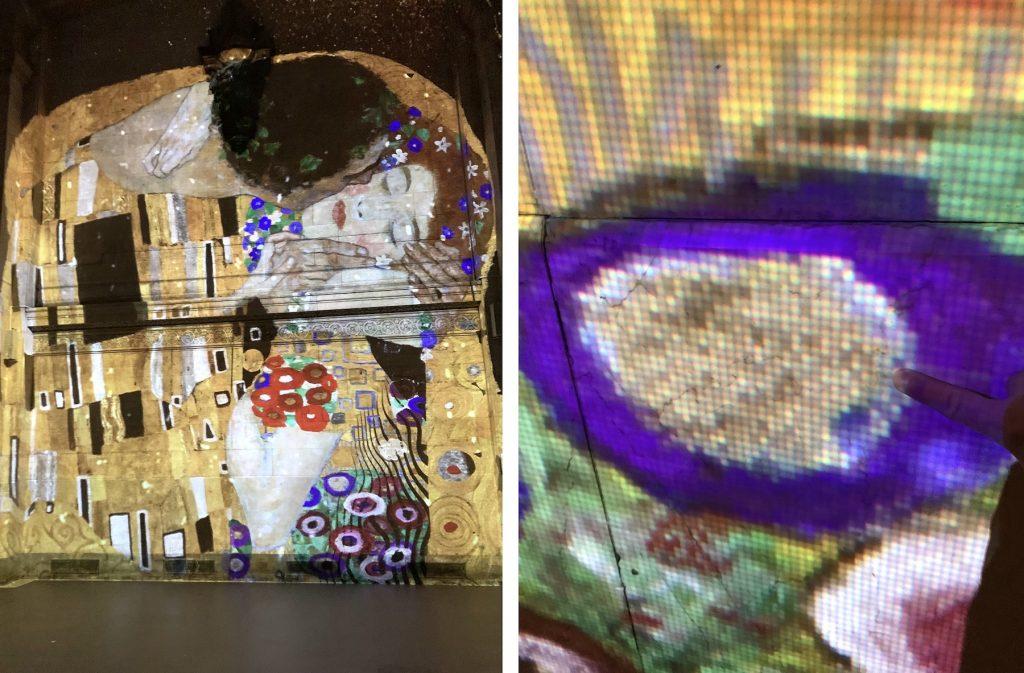 Left: Gustav Klimt’s as seen in “Gustav Klimt: Gold in Motion”; right: a close-up detail of the projection. Photo by Ben Davis.

For Kallir, however, the question was more than just general resolution.

“They take liberties with the originals,” she says. “If you know the originals well, which I do, it’s sometimes hard to figure out what they were working from. The color is sometimes way off. And some of the images are not by Klimt at all. They seem like pastiches of Klimt or pieces of Klimts that they’ve pasted together in different ways.”

According to credits at the end of the show, the show’s component images are licensed through two services: AKG Images and Bridgeman Images. These serve as brokers for photos of Klimt’s art coming from a variety of places, ranging from the Leopold Museum in Vienna to the auction houses Sotheby’s and Christie’s to a number of private photographers to—to our surprise—the Kallir Research Institute, which licensed images to Bridgeman that have found their way into “Gold in Motion.” 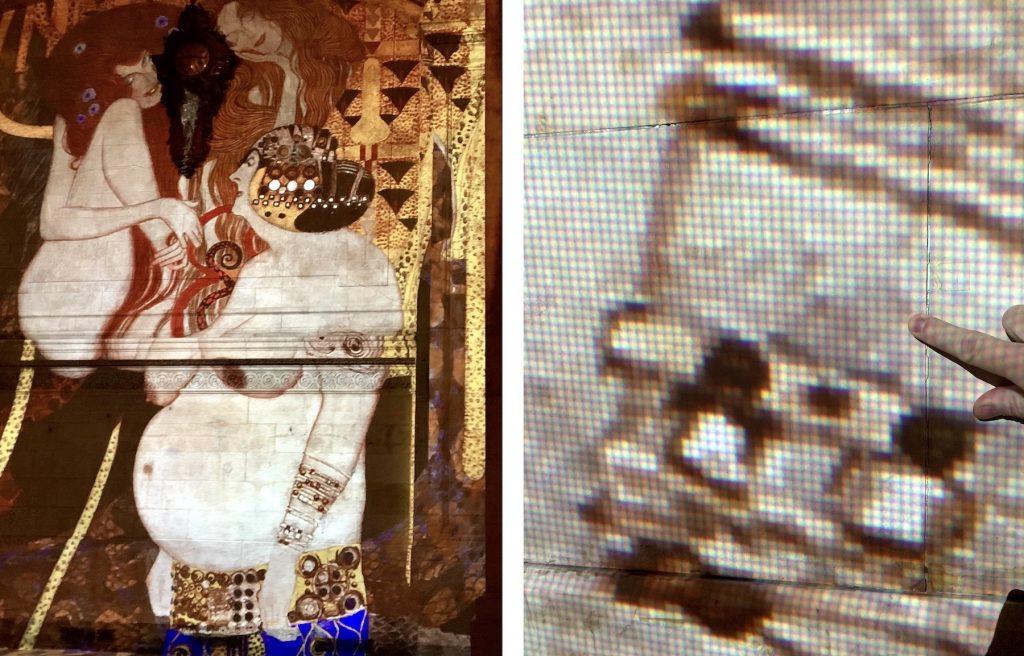 Left: Part of Gustav Klimt’s as seen in “Gustav Klimt: Gold in Motion”; right: a close-up detail of the projection. Photo by Ben Davis.

“This hodgepodge of sources explains to some extent why the image quality is so variable,” Kallir speculated.

If one part of “Gold in Motion” was more satisfying than others for Kallir, it was the sequence dedicated to animating the (1902), the site-specific mural located at the Succession building in Vienna. She noted that this work really was originally meant as a multi-sensory experience, accompanied at its debut by sculpture and live music.

In situ in Vienna, the panels of the are shown high up around the top of its gallery, with an expanse of bare wall between you and the overhead gallery of figures meant to evoke lust and disease. That spare approach is different from its presentation in “Gold in Motion,” where your senses are filled. Nevertheless, Kallir found the presentation justifiable, conceptually. 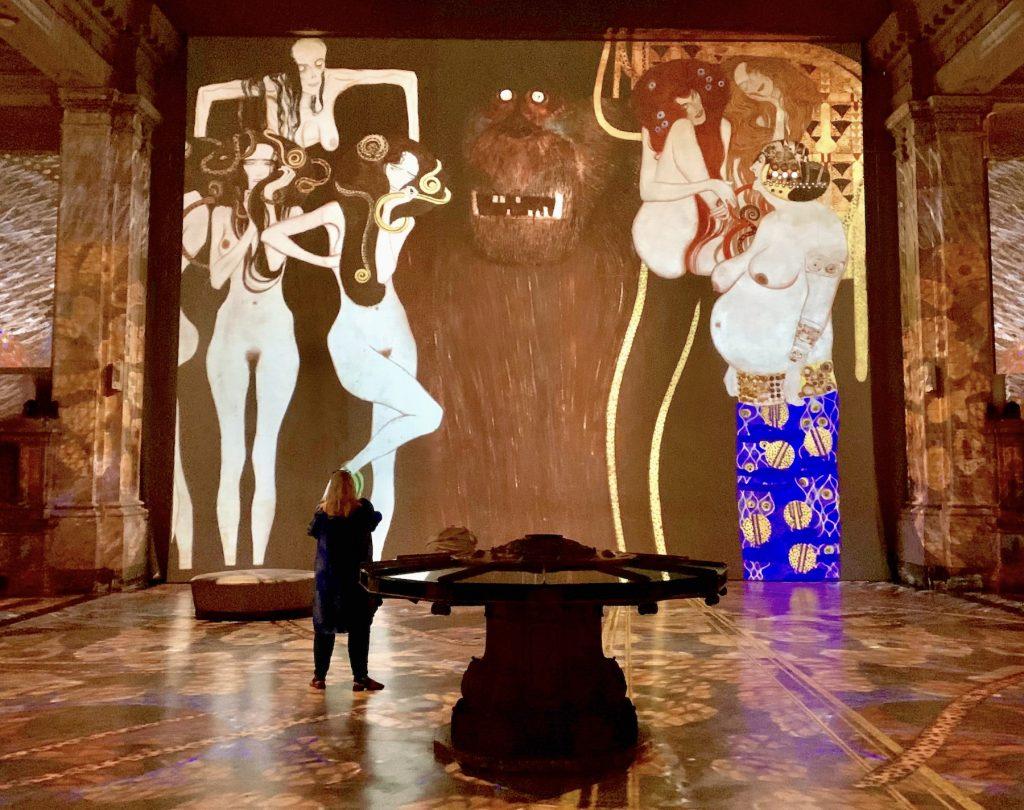 “I asked myself whether Klimt would have approved of the projections,” she said. “I believe most artists embrace cutting-edge technology, whatever it may be in their day and age. The segment is a Gesamtkunstwerk on a scale that Klimt might have dreamed of—. This is the one part of the presentation that could be faithful to his intentions.”

At other points in the show, the super-sizing of the images and the soundtrack went against the grain of the original works, in her assessment. The problem was particularly acute with works meant to be experienced in a more intimate way—in particular the drawings. 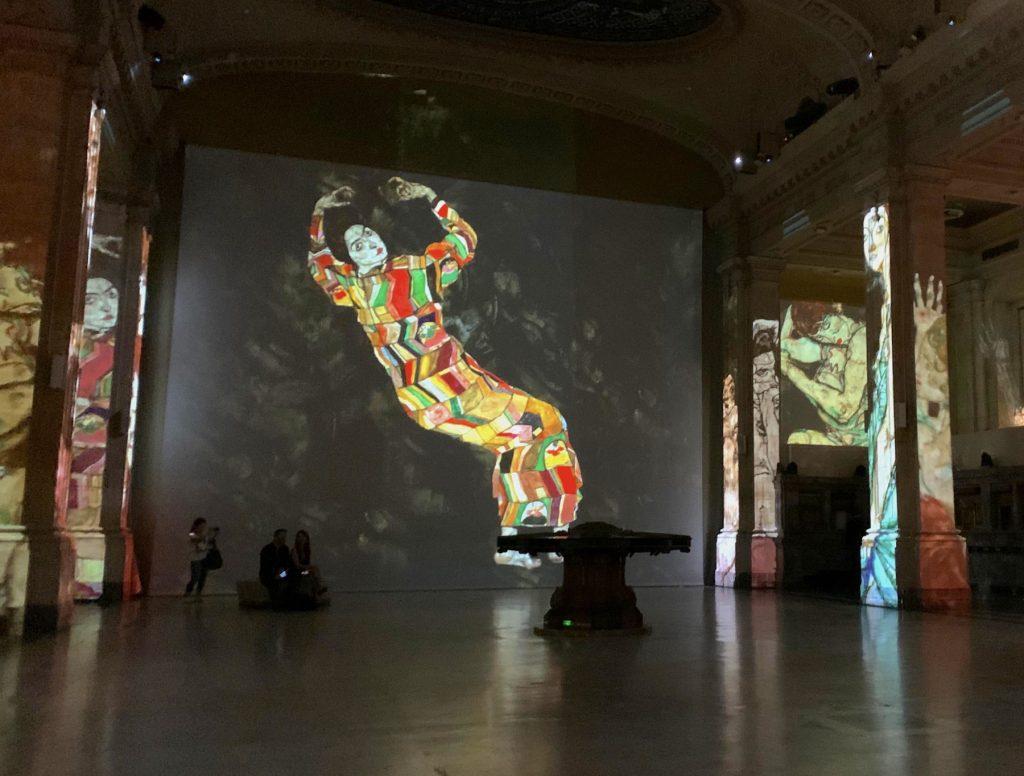 Drawings blown up in “Gustav Klimt: Gold in Motion.” Photo by Ben Davis.

“Klimt and Schiele drawings are small, intimate works,” she explained. “And these images are blown up to a height of, what, 20 feet? It really doesn’t work, aesthetically. Klimt’s drawings are especially difficult because they’re so delicate, at times almost invisible.”

As for Egon Schiele—after Klimt, the most famous Viennese artist of the era—he appears within “Gold in Motion” almost like a rapper dropping a guest verse on a track. About three fifths of the way through the experience, the parade of Klimt’s Greatest Hits is simply interrupted by a few minutes of Schiele fireworks. 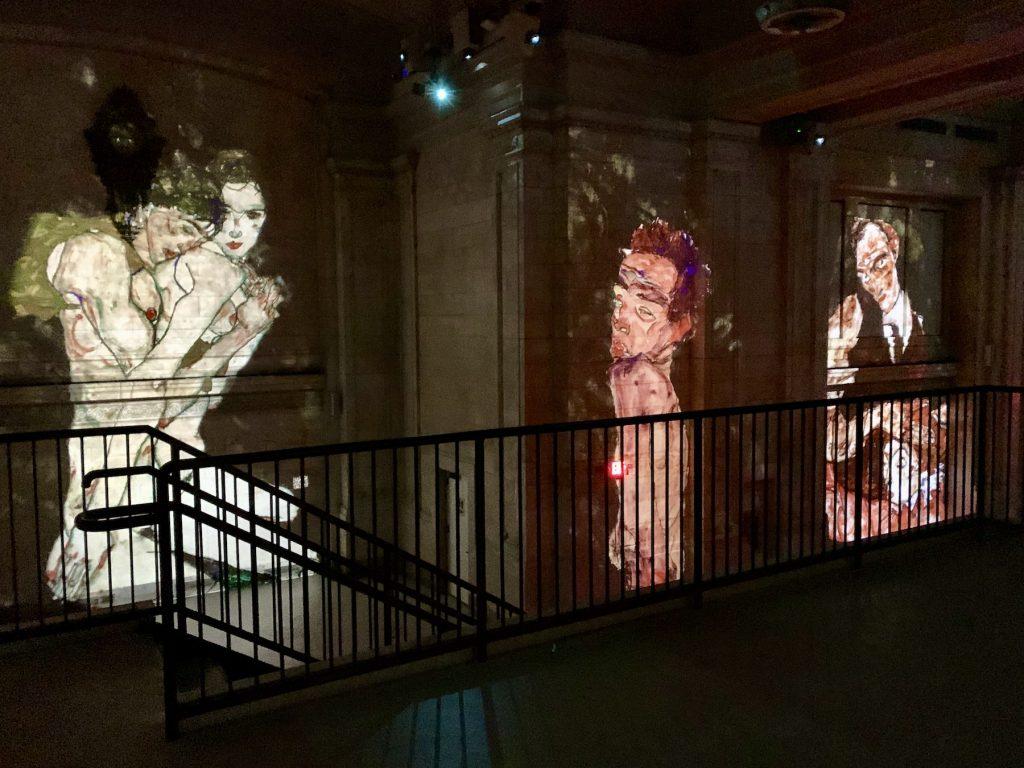 To me, the Schiele detour was a bit puzzling. I imagine that a viewer who didn’t show up with pre-existing knowledge of the two artists might just think that you were passing through a slightly experimental patch of Klimt’s career. Kallir at least saw some logic to it.

“The transition from Klimt to Schiele was interesting,” she said. “Logically, they went from Klimt paintings to Schiele paintings, to Schiele drawings and watercolors, to Klimt drawings. They used Schiele to lead back into Klimt’s drawings.”

What did puzzle Kallir, however, were the animated effects the show uses to introduce the two artists’ works. At points, figures appear first as spidery outlines breaking through the darkness like cracks opening in a wall. 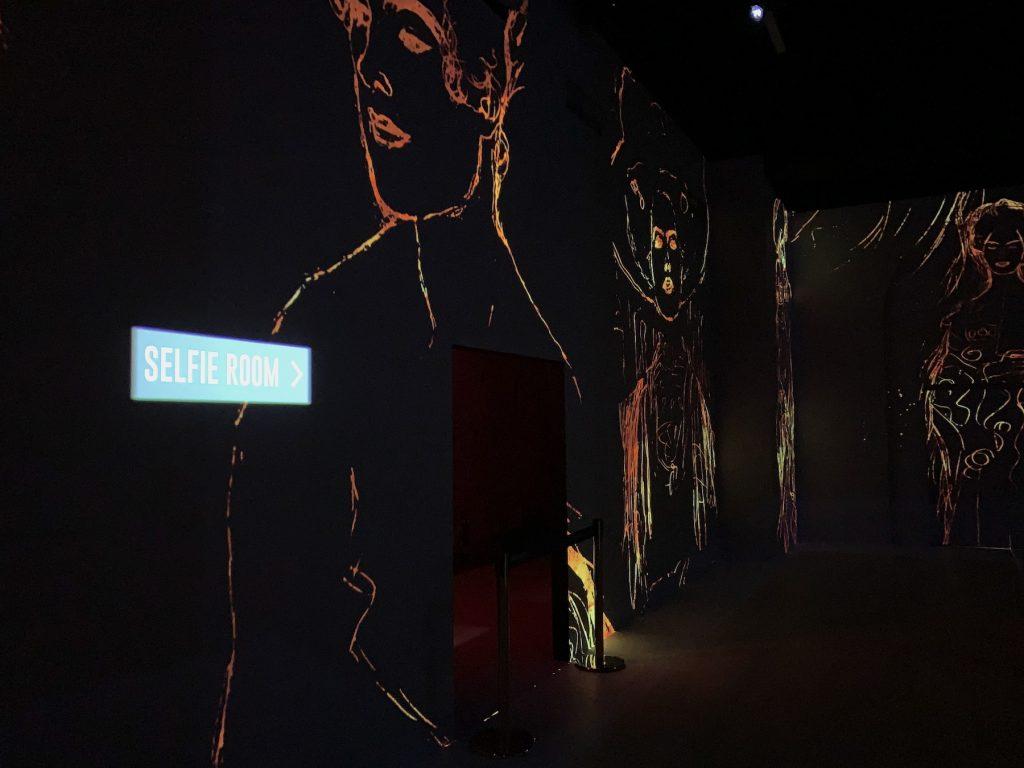 With your ticket, the Hall des Lumières currently offers you two additional experiences that run on a cycle with “Gold in Motion.” One is dedicated to the works of another, slightly later (and less famous) Vienna-born artist, Friedensreich Hundertwasser (1928–2000); the other is a much more contemporary film, transforming various styles of dance into kaleidoscopic patterns of colors and movement. 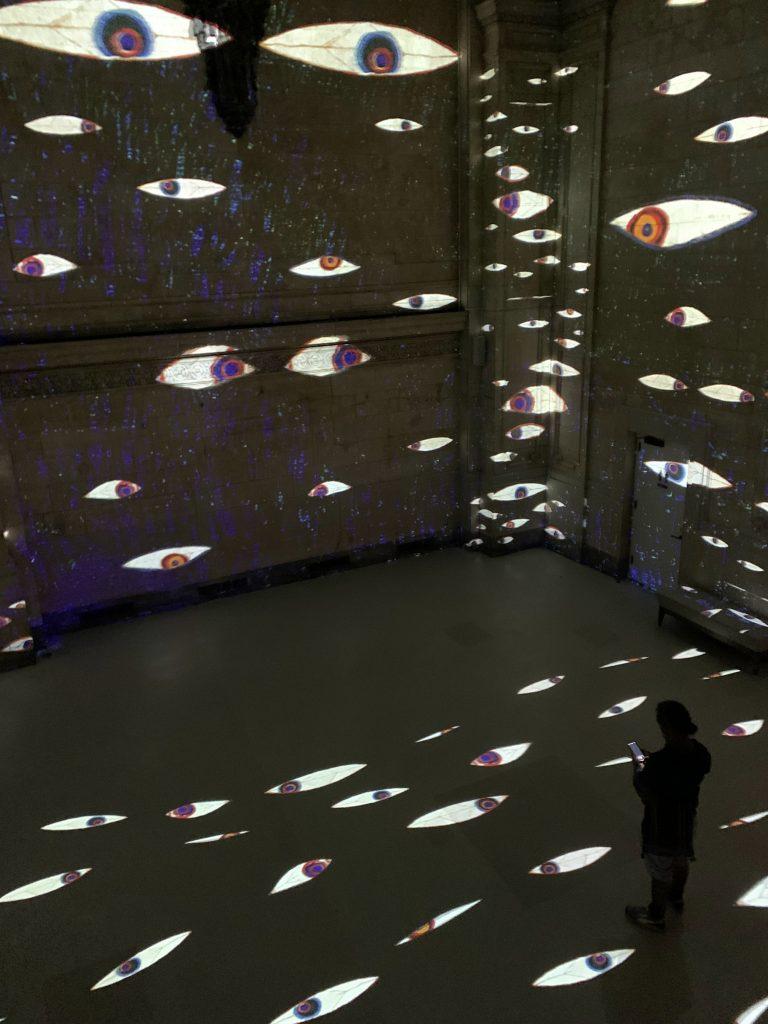 Installation view of ‘Friedensreich Hundertwasser: In the Wake of the Vienna Secession’ at the Hall des Lumières. Photo by Ben Davis.

From the point of view of art history, the spotlight on Hundertwasser suggested something to Kallir about the thinking that informed the whole endeavor, specifically about the decorative treatment of art in general in this immersive framework. (Both “Gustav Klimt: Gold in Motion” and “Friedensreich Hundertwasser: In the Wake of the Vienna Secession” are creative directed by Gianfranco Iannuzzi.)

“Hundertwasser was a postwar artist who was long seen as an also-ran compared to Klimt and Schiele,” she argued. “Now, instead of establishing Hundertwasser as a serious intellect—which is what the art world has been trying to do—they’re resurrecting him on the basis of the purely decorative qualities that he shares with Klimt, and hoping this will click with a different audience on a different level.” 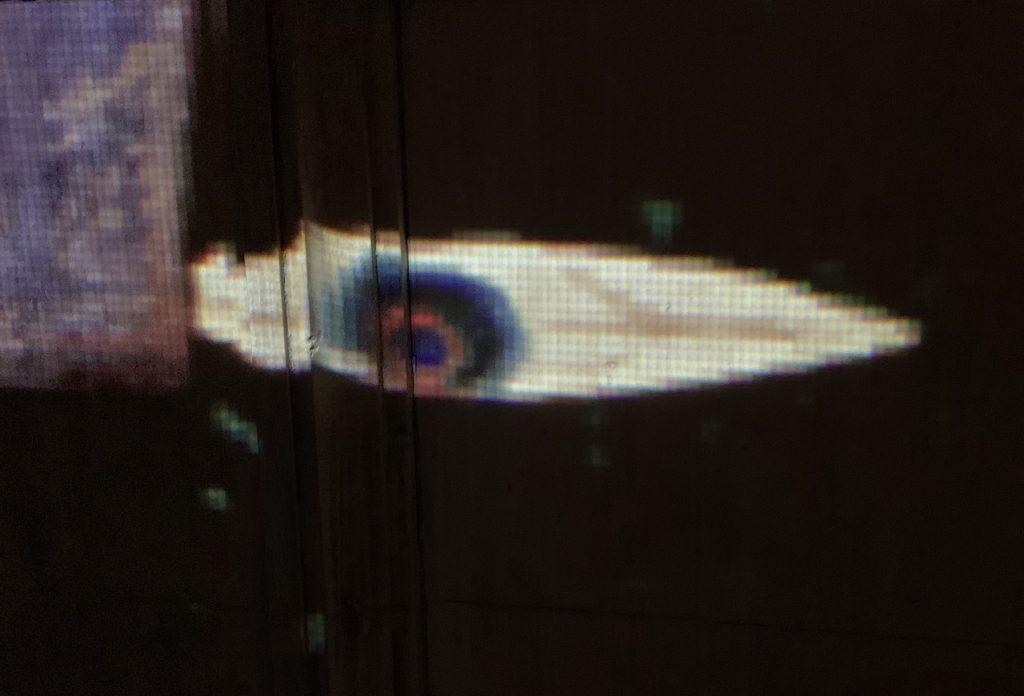 Detail of a projection in “Friedensreich Hundertwasser: In the Wake of the Vienna Secession.” Photo by Ben Davis.

So enjoy the show—just don’t think too deeply about what the artist might have thought about seeing his art rendered in all those blocky pixels.