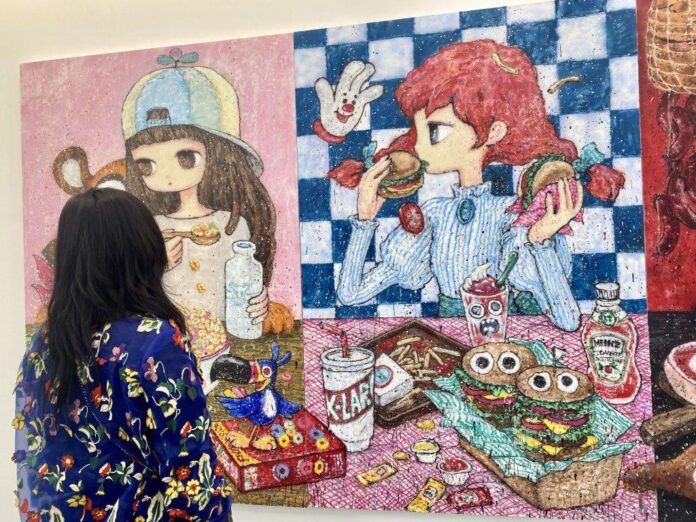 If you arrived at the VIP opening of Untitled Art Miami Beach on empty stomach, the work of Korean American artist Stickymonger was nothing short of tantalizing. Displayed behind a table loaded with sugary sodas, cereals, and baked goods were a quintet of paintings of cartoon-like women enjoying an array of delicious foods.

Collectively titled her “Last Supper” series, the works were a huge hit at the fair, selling out the morning of the preview day for $40,000 each.

The figures are cute and cartoon-like women with giant, anime-style eyes, feasting upon juicy hamburgers, hot fudge-topped sundaes, and buttery lobster, among other culinary delights. (The works have equally endearing titles like , , and .)

Demand was so high that her dealer, Hong Kong’s Woaw Gallery, had no choice but to split up the set, even though the spread of food subtly extends across all five canvases, uniting the separate works with their different colored backgrounds into a single, scrumptious banquet. 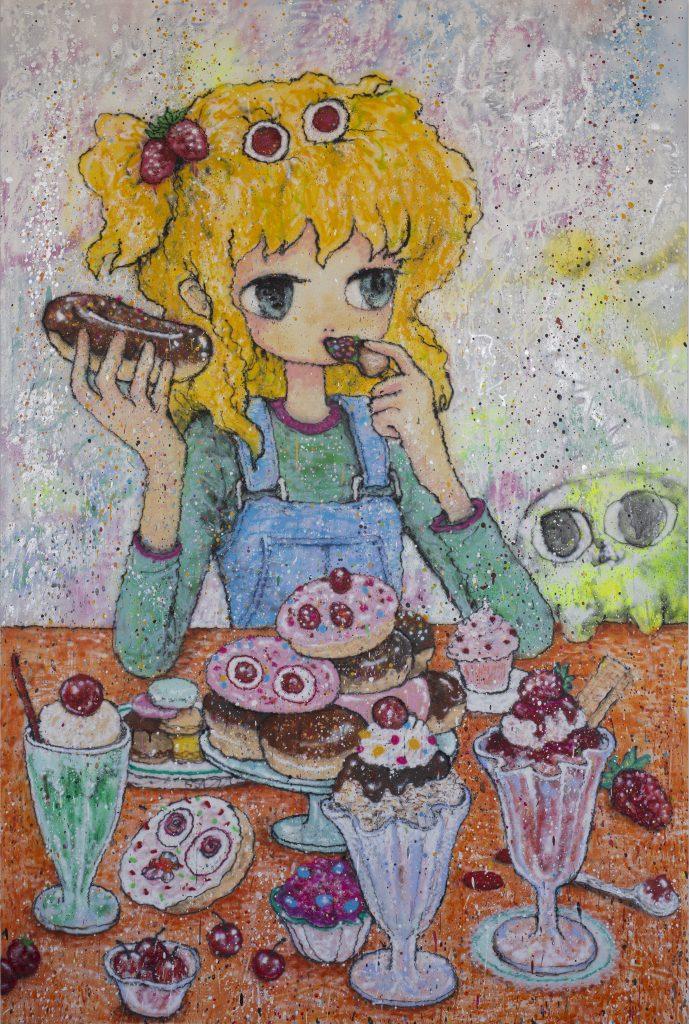 Among those drawn to the booth were music producer and collector Pharrell Williams, who posed for photos with gallery founder Kevin Poon. (Stickymonger, who is camera shy, obscured her face in each shot.)

It’s the gallery’s third time offering Stickymonger’s work at a fair, following outings over the last year or so at Can Art Fair in Ibiza and Art021 in Shanghai—and her first time with a solo booth at a U.S. fair. (She showed with Japanese artist Takashi Murakami’s Tokyo gallery Kaikai Kiki at a group presentation at Frieze New York in 2019.) 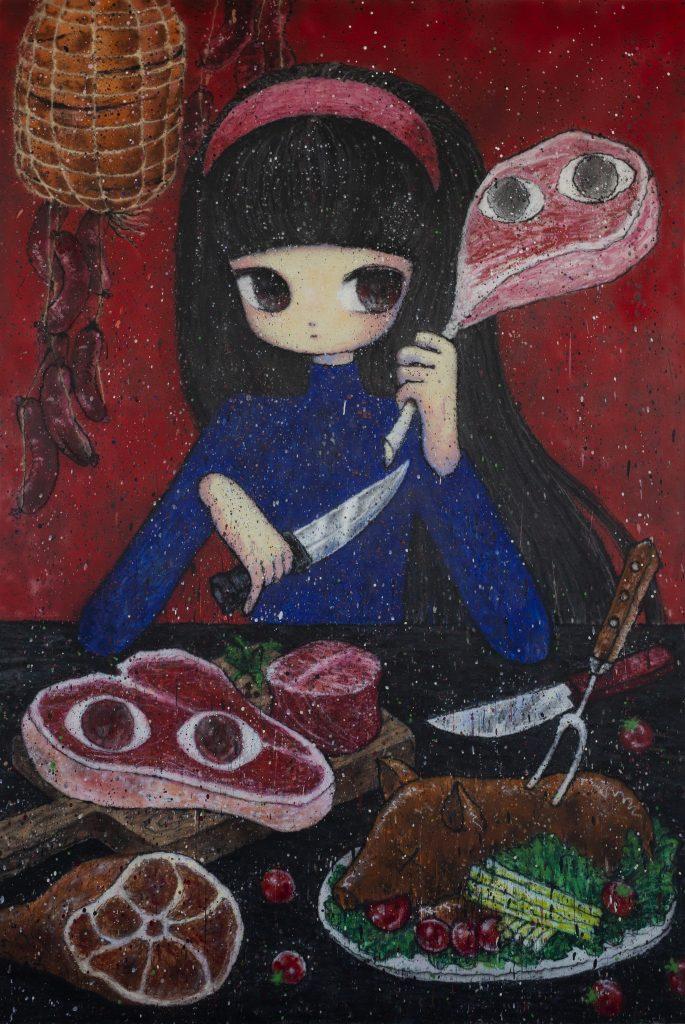 The artist took her own guilty pleasures as the inspiration for the works, painting women who were able to be true to themselves and enjoy a rich meal without feeling bad about it.

Though it inevitably invites comparisons to the famous Leonardo da Vinci work, the “Last Supper” title isn’t so much a religious reference as literal, when you promise yourself “this is my last time eating this shit, but then tomorrow you do it again,” Stickymonger said. 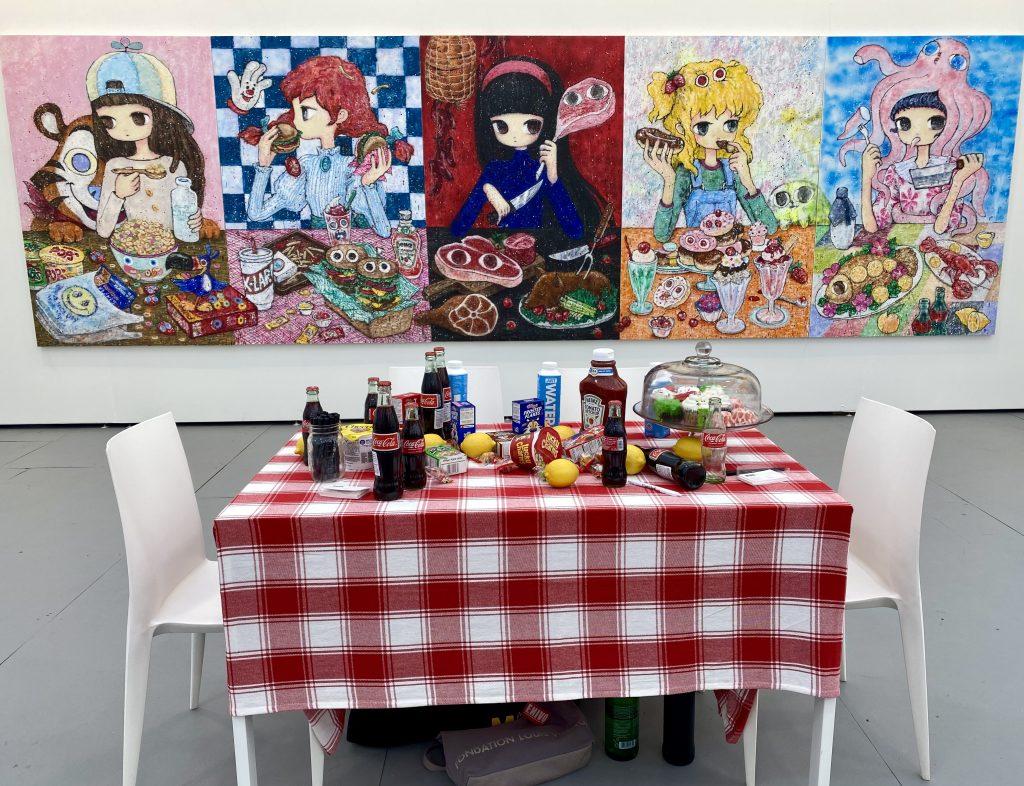 Born Joohee Park in 1979, she chose her artist moniker during a period when she was creating large-scale installations made from a profusion of vinyl stickers.

“I’m from an experimental, digital art background, but I was looking for a more traditional type of medium,” Stickymonger, who has called Brooklyn home the last 13 years, told Artnet News. 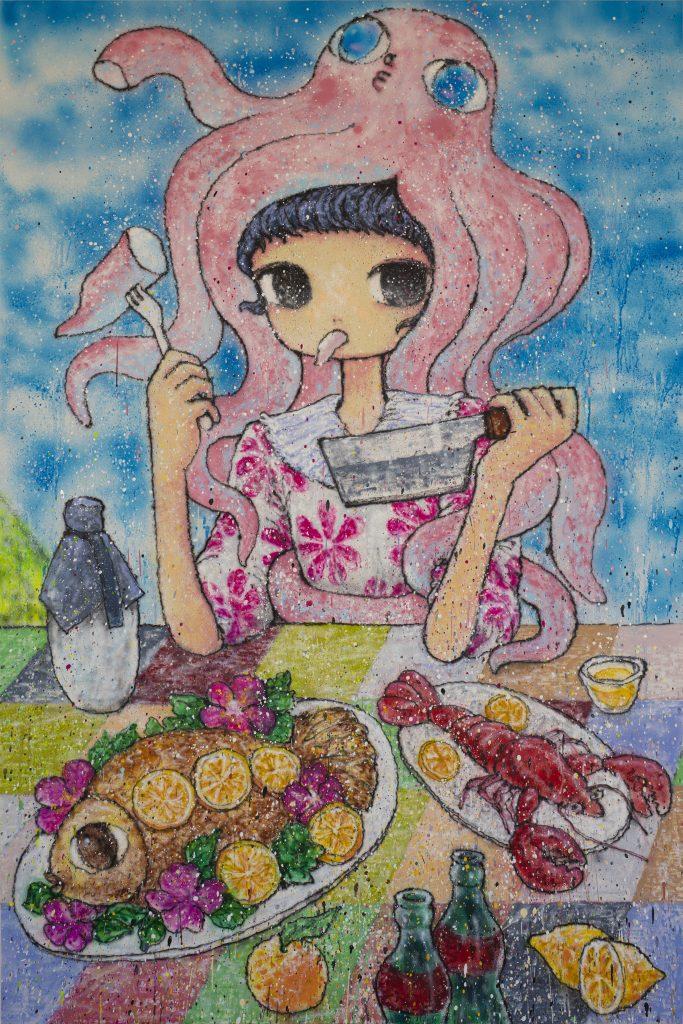 “Obviously Takashi Murakami inspired me a lot. I started to use spray paint and find my own technique,” the artist said. 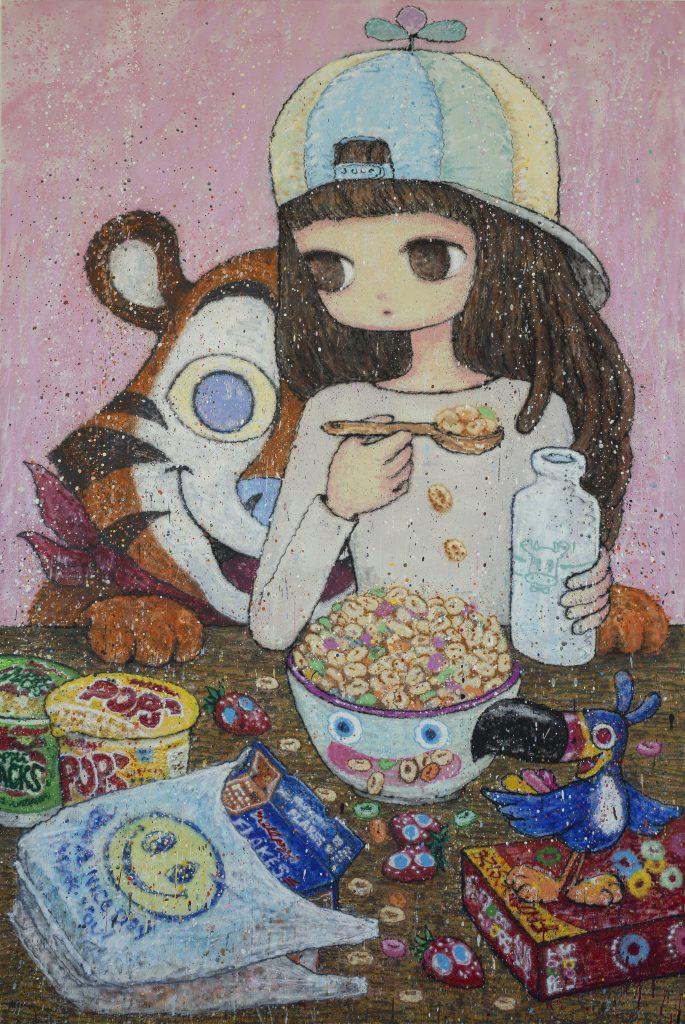 For years, though, Stickymonger lived what she called “a double life,” designing animated graphics for an advertising firm by day and painting by night: “Slowly my artist career became better and better, and I was able to quit my job in 2019.”

She estimated that perhaps half her sales at the fair came from Instagram followers and past collectors, but was also delighted to be approached by a stranger who proclaimed the booth to be the fair’s best.

“That meant a lot,” Stickymonger admitted. 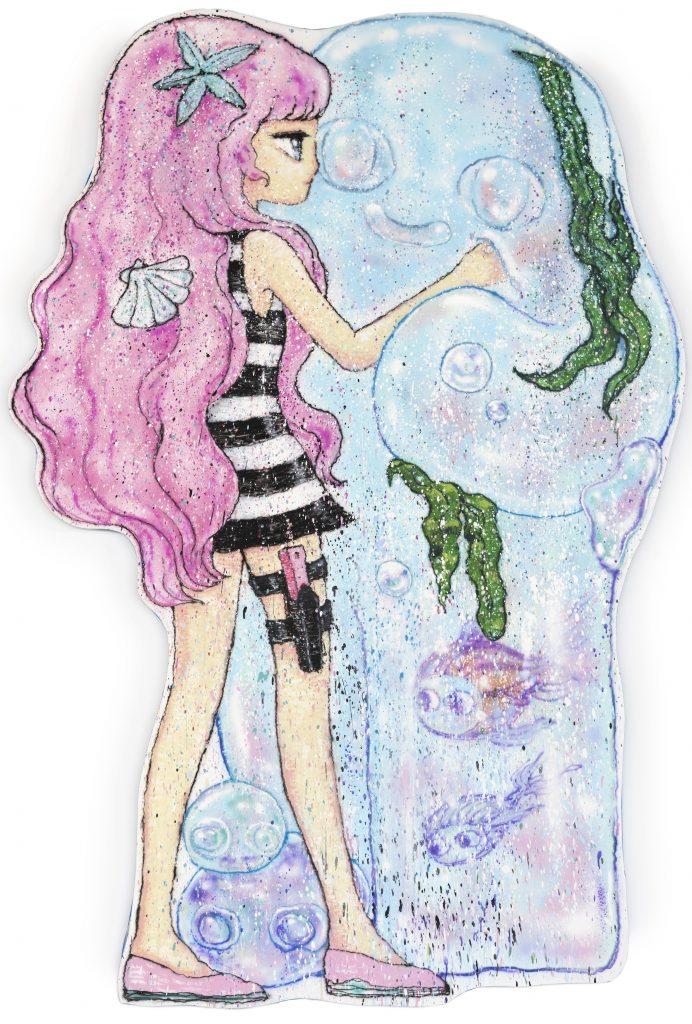 Each work has a celebratory feel, creating a sense that Stickymonger’s subjects are living their best lives, enjoying their Leonardo-esque feast without regrets.

“I wanted to show,” the artist said, “that we can be true to ourselves.”