Home News If the National Portrait Gallery buys the £50m Portrait of Omai, it... 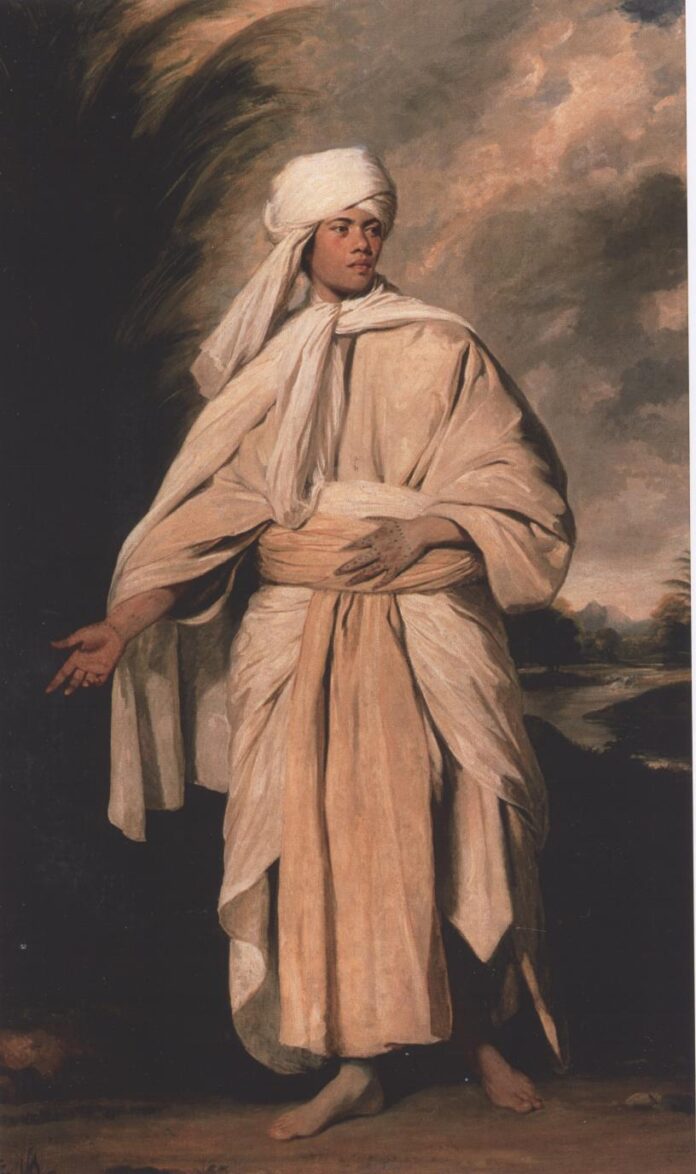 In July, I visited the Musée de Tahiti et des Îles, to talk to colleagues there about a partnership that would take great Oceanic artefacts from Europe back to their place of origin for the first time in more than 250 years. Returning to Polynesia myself, I could only reflect on a paradox: its archipelagos are about as far from Europe as it is possible to go, although the histories of the regions have been closely interconnected from the start.

The cultural impacts of the voyages of Captain James Cook, for example, were eclectic, profound and enduring. Without the category of taboo, it’s hard to imagine modern Western thought. And there would be a Pacific-sized hole in the worlds of fashion and popular culture without tattoo. Both tapu and tatau were Polynesian words, anglicised following those expeditions. Tatau was first witnessed on Tahiti in 1769; the sailors who got inked unwittingly inaugurated a global movement.

The Cook voyages stimulated scientists, writers and artists. The Royal Academicians who accompanied Cook—William Hodges and John Webber—took European painting further than it had ever travelled before, evoking luminous environments, sculptures of divinities and great voyaging canoes.

For their part, Polynesian Islanders were keen to seize the opportunity of Cook’s visit to voyage further. They joined his ships to visit other parts of the great ocean or see Europe. Sadly, Tupaia, the priest, navigator and artist who hoped to be Joseph Banks’s guest in England, died of fever in Batavia. Mai, generally known as Omai, did make it to England and became a social sensation, meeting George III and joining high society for two years; Cook took him back to Polynesia and he was repatriated in August 1777.

Mai was painted by William Hodges, John Webber, Nathaniel Dance, William Parry and the then president of the Royal Academy, Joshua Reynolds. Reynolds’s emphatically grand treatment is also the most ambiguous of all the Mai portraits: Mai stands his ground before vaguely tropical foliage, enveloped in a fabric like a toga. He is certainly classicised, but could equally pass as an Oriental prince.

Yet an unmistakable sign of Mai’s nationality is also prominent in the Reynolds painting. His right hand is palm-up to expose the fine tattoos on the inner side of the wrist, while the left reveals those on the back of the hand and fingers. This is a man indelibly marked by exotic ornament, at once a resolute and self-possessed figure, yet also a decorated, hence perhaps feminine one.

The British people who met Mai reported wildly contradictory impressions. Some thought him noble, others barbaric; some intelligent, others stupid. These personal responses echoed confusion about the qualities of Pacific peoples, whom Europeans similarly found both astonishingly refined and dangerously savage. In more subtle painterly terms, Reynolds’s truly remarkable painting captures this uncertainty. Was this a sensual, feminine realm that Europeans would rightfully master? Or were Pacific Islanders better imagined as classical aristocrats—as people who might shape their own histories?

Mai himself had done his best to answer the question. He was from the island of Ra’iatea, which had been invaded by warriors from Bora Bora. His father had been killed, and Mai himself was one of the refugees. His ambition, and his reason for coming to Britain, was to secure guns and support that would enable him to obtain revenge and recover his ancestral lands.

Reynolds’s Portrait of Omai exemplifies the fertility of cultural encounters in the late 18th century, and also their limits. Fashionable society was rapt by Mai’s exoticism, titillated by tattoo and by narratives of sexual licence in the South Seas. Political turbulence in the islands, and the struggles over resources that took place there, just as in Europe, were not that novel or fascinating. Yet the epoch was also marked by the beginnings of deeper engagement, and growing knowledge of Europe in Oceania, and vice versa.

Portrait of Omai is a revelatory, landmark work that emphatically should be in a public collection in Britain—for permanent display, for inclusion in exhibitions on themes such as empire and cross-cultural encounter, and for reactivation by contemporary artists. A temporary export bar on the work leaving the UK ends next year. Were the painting to be acquired by the National Portrait Gallery for £50m, it could then be loaned back in due course to the region that inspired it.

The Musée de Tahiti et des Îles, Te Fare Manaha, opened in 1975, has long exhibited the heritage, history and contemporary art of Polynesia. It has robust professional standards and its Ia Orana Gauguin exhibition in 2003 is the only major show on the artist ever to have taken place in the Pacific. An ambitious programme that is now nearly finished gives the museum sparkling new galleries fit for the 21st century. Famous works of Oceanic art are travelling from the Museum of Archaeology and Anthropology in Cambridge, the British Museum, and the Musée du quai Branly-
Jacques Chirac for the opening displays and medium-term loan. They include A’a, a god whose body is covered by multiple smaller gods, from the British Museum. Henry Moore owned a cast of this piece and famously complained it was so powerful he could not find anywhere in the house to put it. An early double figure being lent from Cambridge, an antiquity at the time it was given to Cook on Tahiti in 1769, appears to be the first still extant work of figure sculpture collected by any European in the Pacific.

It would be wonderful to return Portrait of Omai, for a period, to the company of these ancestors. Exhibiting the great Oceanic works and a great British painting together in Tahiti would give Polynesians today a lens on the reverberations of Mai’s voyages. It would enable us all to reflect on an extraordinary time, some 250 years ago, when Islanders and Europeans discovered each other. Neither world would be the same ever again.

• Nicholas Thomas is the director of the Museum of Archaeology and Anthropology, Cambridge. Over 2018 and 2019, he co-curated Oceania for the Royal Academy of Arts and the Musée du quai Branly-Jacques Chirac

Through Beauty and Pain, the 2022 Busan Biennale Flexes the Strength of South Korea’s Art Beyond Seoul