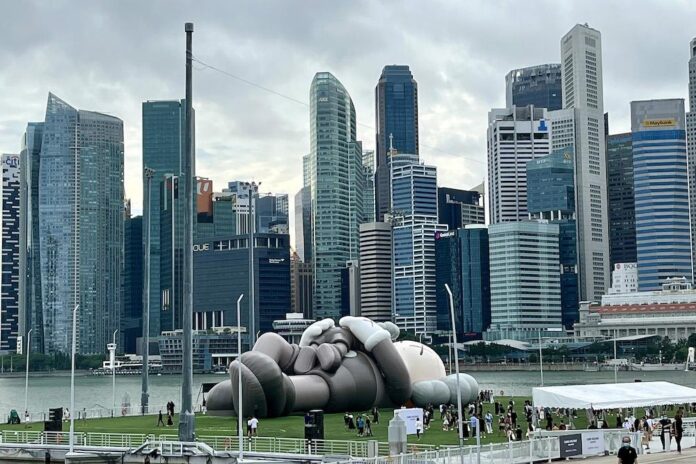 Ending a months-long legal battle, the Ryan Foundation in Singapore, which threatened to shut down a traveling public art show by KAWS in the Asian city state, has apologized for the “embarrassment and/or distress” inflicted on the exhibition’s organizers, Hong Kong agency AllRightsReserved (ARR), as part of an out-of-court settlement.

The drama started last November, when the foundation’s directors—Ryan Su, a lawyer and art collector in Singapore, and Adrian Chan—obtained an interim injunction against ARR to block “KAWS: Holiday Singapore,” from opening at The Float at Marina Bay. The wildly popular free show featured a 140-foot inflatable sculpture by the famed Brooklyn-based artist Brian Donnelly, also known as KAWS.

The non-profit claimed it was involved in the initial planning for the show, and accusing ARR of breaching its intellectual property rights and misusing confidential information. In addition to stopping the exhibition, the injunction also hit pause on the sale and distribution of related merchandise, as well as promotional activities.

But now, in a letter obtained by Artnet News, Su and Chan now say the allegations they made against ARR, including the misuse of confidential information and copyright infringement, were incorrect.

“ARR had the right to organize and conduct the Exhibition in Singapore,” the statement read. “We apologise for any embarrassment and/or distress that the Allegations have caused to ARR and its officers.” 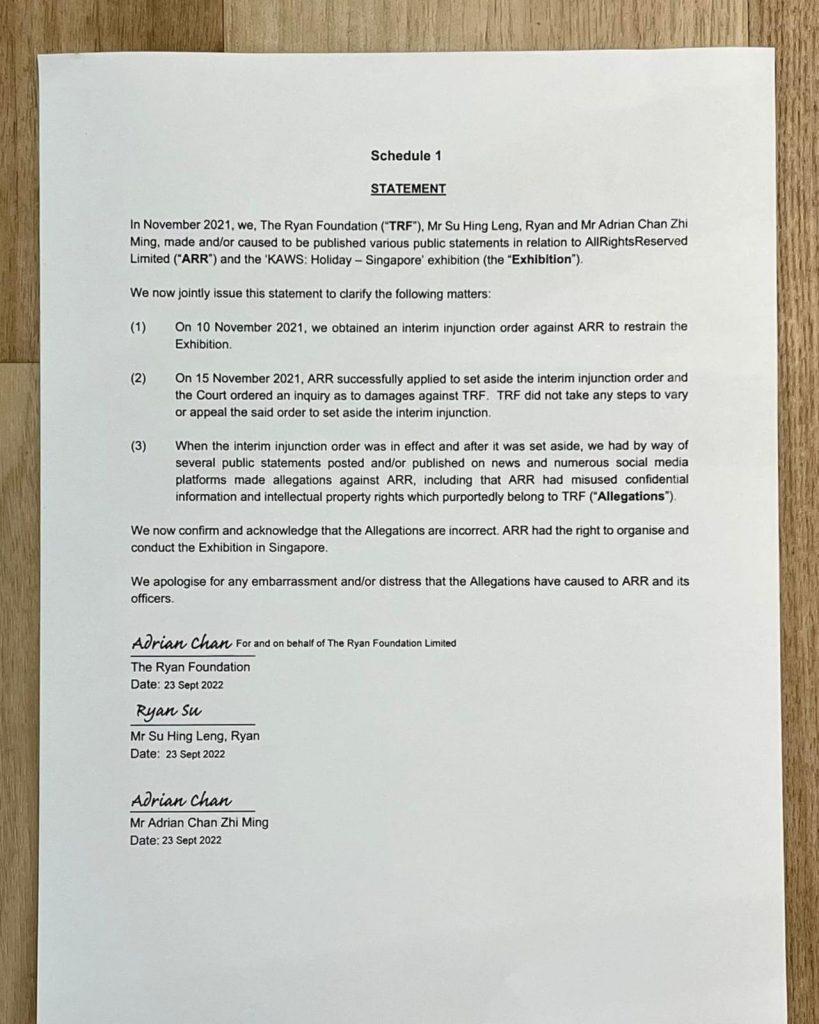 A statement from the Ryan Foundation in Singapore apologizing to the organizers of the “KAWS: HOLIDAY” exhibition, AllRightsReserved.

The apology comes months after the courts sided with ARR, which has been organizing the “Holiday” world tour since 2018 in Seoul. Two days after issuing the injunction, the court reversed it after hearing arguments from ARR’s legal team, and the show was back on track on November 15. The court also ordered the Ryan Foundation to pay the Hong Kong agency’s legal costs.

But the foundation did not back down, vowing to proceed with a full trial. The legal disputes between the Ryan Foundation and ARR continued to escalate, with ARR countersuing the foundation and its directors for defamation. A settlement was finally reached during a mediation that took place on September 21—exactly 10 months after the Singapore exhibition concluded. As part of the deal, ARR has dropped its defamation charges against the foundation.

“We would like to thank our long-time collaborator, acclaimed contemporary artist KAWS, partners and friends who have remained steadfast in their support of us throughout,” ARR said in a statement. “We are overwhelmed by the outpouring of love and colossal support for the Exhibition from the most affectionate Singaporeans. We hope to return to the city and meet you all very soon.”

Beyond the public apology, no further details, including whether the Ryan Foundation will still have to pay ARR’s legal costs, have been disclosed.