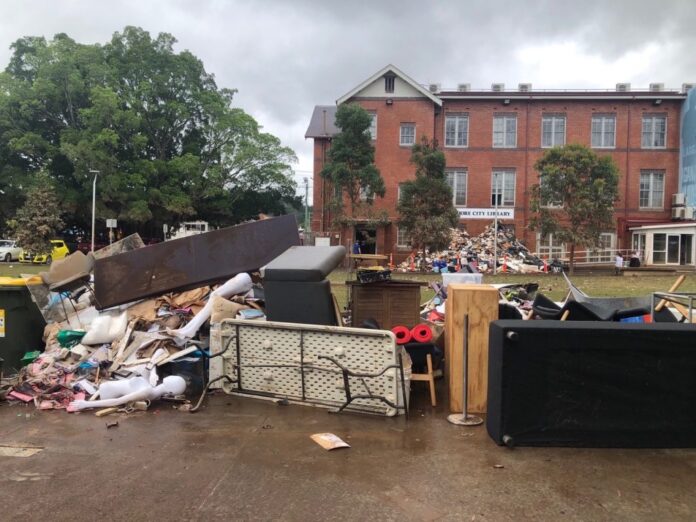 “Incomprehensible,” “devastating,” and “like nothing we’ve ever experienced before,” is how many are describing the unprecedented damage left behind by flooding in Australia’s northeastern region of New South Wales.

“What happened on Monday, February 28, is being described as a ‘rain bomb,’” said Jane Fuller, director of the non-profit organization Arts Northern Rivers, in an email to Artnet News. “For us on the ground it was certainly like nothing we had experienced before, and we are used to floods.”

The damage was especially severe in the Northern Rivers region, where at least two people died. At its height, the Wilson River peaked at about 47 feet, resulting in the worst flooding in history.

Among the most hard-hit art institutions was the Lismore Regional Gallery (where Arts Northern Rivers maintained its offices), where waters rose as high as the second floor of the gallery. In hopes of avoiding what it thought early on was the worst-case scenario, gallery staff had moved valuable items to the second floor—including craftsman Geoff Hannah’s famous Hannah Cabinet, for which a 2019 campaign raised $1 million to acquire and keep in Hannah’s hometown of Lismore. There were also Afghan war rugs (part of a current exhibition), books, frames, technical equipment and more, notes Fuller.

Since the last severe flooding in 2017, when 41 feet of water reached almost to the ceiling of the Lismore Regional Gallery’s first floor, staff thought the works might be safe this time around if moved to the second floor.

But then another almost 10 feet flooded in, “destroying everything that had been raised,” Fuller said.

Geoff Hannah told ABC that they now plan to remove the cabinet from the top floor using a crane and transport it to either Brisbane or Canberra to be dried and assessed.

“Water would have soaked all through it; the sooner we can get it out of there, the better for the recovery part of it,” he said.

“It’s really terrible,” said Liz Ann Macgregor, a curator and art historian who formerly headed the Museum of Contemporary Art Sydney. Macgregor confirmed that Lismore Regional Gallery had been destroyed, “apparently with most of its collection.”

Macgregor said many artists have also lost their studios, including Megan Cope, an Aboriginal artist who has work on display at the Sydney museum now, and who was about to open a show in Brisbane. Cope apparently lost 20 years worth of work and research, according to Macgregor.

“There are piles and piles of damaged  belongings on the streets of Mullumbimby, our closest town. People are still trapped in some of the valleys,” she said.

Lismore Regional Gallery director Ashleigh Ralph has an auto-response email that reads: “Due to the devastating floods in Lismore, the gallery is currently closed while we wait to assess the extent of damages. For now, the safety and wellbeing of our community is our focus.”

“The damage is incomprehensible to those who cannot be there first hand. It will take months and months to repair,” Fuller said, “and some of it cannot be repaired at all.”

Arts Northern Rivers is, however, “lucky” in that it’s not tied to a physical building, she said. “We can move our work place to a virtual space, we can rent another space on higher ground in another part of the Northern Rivers. It is the museum, the gallery, the Northern Rivers Conservatorium of Music, private-owned arts spaces, and studios that hold these buildings and are central to our experience within our cultural cohesion, these are the ones that are the most greatly affected.”

Fuller said that in addition to a call for immediate support, including financial donations and physical supplies, her organization is “advocating to our government to put into place a short-term strategy of dollar support for studios and galleries. Then we will look at the medium term of how do we keep our artists and creatives here in the region and what that looks like.”