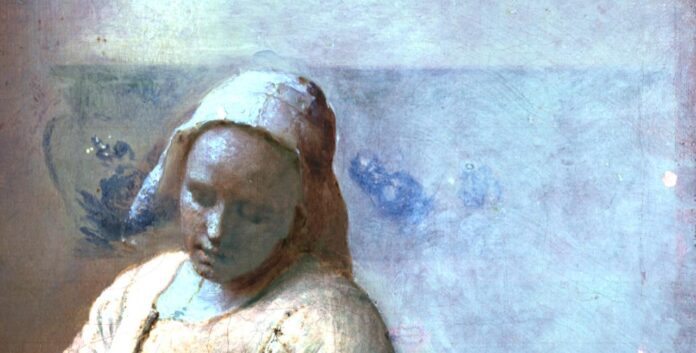 Scientific investigations of Vermeer’s The Milkmaid reveal what the Rijksmuseum describes as “startling discoveries”. Advanced techniques have uncovered two objects in the picture which the artist later painted over. Research also throws fresh light on Johannes Vermeer’s technique: the assumption that he worked slowly and meticulously is now being questioned.

The Milkmaid (about 1660), which was bought by Amsterdam’s Rijksmuseum in 1908, has long been among the museum’s most popular works.

Research on The Milkmaid has been undertaken in conjunction with what will be the largest Vermeer exhibition ever held, to be presented from 10 February to 4 June 2023. It will include 27 of the 35 accepted Vermeers. An earlier retrospective at the National Gallery of Art in Washington, DC and the Mauritshuis in The Hague in 1995-96 included 23 paintings.

According to Taco Dibbits, the museum’s general director, “so much work had already been done on The Milkmaid that we never anticipated something so definitive would surface thanks to modern technology”. Conservators at the Rijksmuseum, working with colleagues from the Mauritshuis, found an underpainting below the surface of The Milkmaid. On the wall, behind the woman’s head, there is a sketch of a wooden jug holder and several hanging ceramic jugs. This would have been used in a 17th-century kitchen to store jugs by their handles.

In the lower right of the composition conservators identified a fire basket, which again was painted over. Woven from willow stems, it would have contained a bowl of glowing coals—to keep babies warm and to dry nappies. An inventory compiled shortly after Vermeer’s death records that his household owned both a jug holder and fire basket. While working on The Milkmaid, Vermeer decided to drop these two details.

As Gregor Weber, head of fine art at the Rijksmuseum, explained at a press conference this morning: “Less is more became a kind of motto for Vermeer’s art: simplicity, strong images not through many distracting details, but through the concentration on the essential.”

The underpainting also reveals more about Vermeer’s technique. It has long been assumed that the artist produced his small surviving oeuvre very slowly, working with great precision. But according to a museum spokesperson, the sketched underpainting “shows clearly that Vermeer first quickly painted the scene in light and dark tones before developing the detail”.

Next year’s Vermeer show at the Rijksmuseum will be the most important ever devoted to the artist. Unusually, the Frick Collection in New York has offered to lend all three of its Vermeers for the first time since they were acquired a century ago.