Home News Is the UK National Trust influenced by a campaign group funded by... 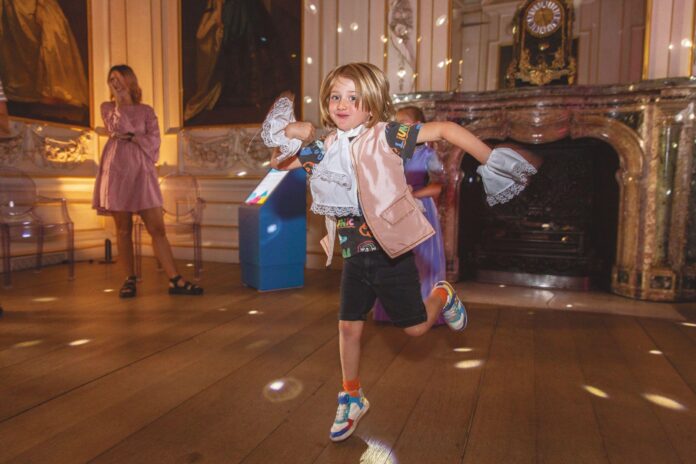 In October, the UK National Trust rebranded Sudbury Hall in Derbyshire as The Children’s Country House. The house, built in the 17th century by the aristocratic Vernon family, was used as a filming location for the BBC’s 1995 adaptation of Jane Austen’s Pride and Prejudice.

The new framing of the home “set a precedent” for how UK’s heritage sites can engage younger audiences, the trust says. “The response from young families and children to the Children’s Country House has been overwhelmingly positive,” says John Orna-Ornstein, the director of curation and experience at the National Trust. “It has been a joy to see children engaging with the history of Sudbury Hall,” Among the activities on offer is a dressing up salon illuminated by mirror balls, an escape room and a blossom watch.

Visiting children may enjoy it, but Sudbury’s dressing-up room has become an unlikely lightning rod for an ongoing, increasingly public and increasingly fierce struggle for control between modernising and conservative movements within the organisation’s membership.

Representing the membership’s conservative activists is a group called Restore Trust, which says Sudbury is being turned into a “theme park”.

The director of Restore Trust is 23-year-old Zewditu Gebreyohanes, who joined the organisation six months ago after a short stint at the influential right-wing think tank Policy Exchange. She made headlines after former Prime Minister Boris Johnson appointed her as a trustee to the Victoria and Albert Museum, via the Department for Digital, Culture, Media and Sport (DCMS). Gebreyohanes has a track record of opposing “woke” and “post-Black Lives Matter” policies in the cultural sector.

In an interview, Gebreyohanes tells The Art Newspaper that the changes at Sudbury are “ridiculous” and “indefensible”.

“There’s nothing bad about a dressing up salon,” she says. “But is it in the National Trust’s remit? No, it’s not. The trust should perform its core functions.” That remit, Gebreyohanes said, is to promote the preservation of the UK’s heritage properties.

Gebreyohanes defines Restore Trust as “a forum where friends and supporters of the National Trust can come together to discuss their concerns about the future of the charity and lobby for change.” She says the organisation is apolitical, but she is critical of the “divisive ideologies” that allegedly drive the agenda of the National Trust.

Restore Trust was founded in 2021 by Cornelia Van der Poll, a lecturer in Ancient Greek at the University of Oxford. In public filings on Companies House, the organisation also lists Neil Record as a director. Record is the chairman of the Institute of Economic Affairs, the right-wing think tank based out of 55 Tufton Street, London, the registered address of a series of known lobbyist groups, leading to accusations from organisations like The Good Law Project that Restore Trust is “astroturfing” – a term that refers to an organisation that claims to be a spontaneous, grassroots activist movement, but intentionally hides the true source of its funding.

Gebreyohanes says Restore Trust is a small organisation “run on a shoestring”. It has no official premises and “relies on donations from the public,” she says. Although she admits she “was not sure what the accounts really are or what they look like”, Gebreyohanes says that accusations that Restore Trust are funded by “dark money” is “absolutely false and a slur”. She notes there is no obligation for Restore Trust to make all the names of its funders public. In a series of Tweets, Restore Trust has vehemently denied any link to any of the lobbying organisations based out of 55 Tufton Street.

Shortly after its founding, Restore Trust benefited from extensive exposure in conservative-leaning media outlets, primarily The Telegraph, which ran criticisms of the National Trust’s Interim Report on Colonialism and Historic Slavery, an evidence-based report published in 2020 that revealed 93—around one third—of National Trust properties have historic links to colonialism and the slave trade.

No meeting of minds

Since then, Gebreyohanes and Restore Trust have become increasingly embroiled in a public clash with the management of the National Trust, a
conflict that reached a crescendo ahead of the trust’s annual general meeting on 5 November.

Restore Trust used the meeting to seek more control over the charity’s direction by endorsing and campaigning for seven candidates to join the National Trust Council and by putting forward two member resolutions: to abolish the chair’s discretionary proxy vote and to establish an independent Ombudsman to consider complaints about the organisation. The AGM saw one of the National Trust’s highest ever turnouts, with 127,000 members voting on six resolutions. Neither of the Restore Trust resolutions were passed, and none of its seven nominations was elected to the council. Celia Richardson, the director of communications and audience insight at the National Trust told The Art Newspaper that “The National Trust’s work is a matter for public debate. That’s part of being an institution founded to serve the whole nation, and it’s something we’ve always embraced.” But Richardson said that “paid-for canvassing for places on our council is new and concerning.” Restore Trust denies using private funds to promote its council nominees, although a number of members of the National Trust say they received promoted advertising on social media from Restore Trust.

The organisation is not deterred by its lack of success at the AGM. Instead, Gebreyohanes’s team responded by taking to Twitter and accusing the National Trust of surreptitiously introducing a Quick Vote system that Restore Trust claims skewed votes, and thus made the integrity of the elections questionable. The Tweets were later deleted.

“I wouldn’t say the vote was stolen from us,” Gebreyohanes says. “But it’s suspicious they won’t make the Quick Vote results public.”

In a statement, the National Trust said: “Quick Vote is considered best practice for these sorts of elections by our independent election services provider and we introduced it on their advice. It is used by many member organisations. Members are entirely free not to use Quick Vote and can vote for whichever candidates or resolution response they wish. The Quick Vote option was explained clearly in the instructions for voting which were sent to members at the end of the summer.”

Restore Trust has vowed to continue its work. “We are about democracy and accountability,” Gebreyohanes says. “We will force [the National Trust] to somehow take an interest in these issues.”

In the German Art Center was found Swastika on the floor