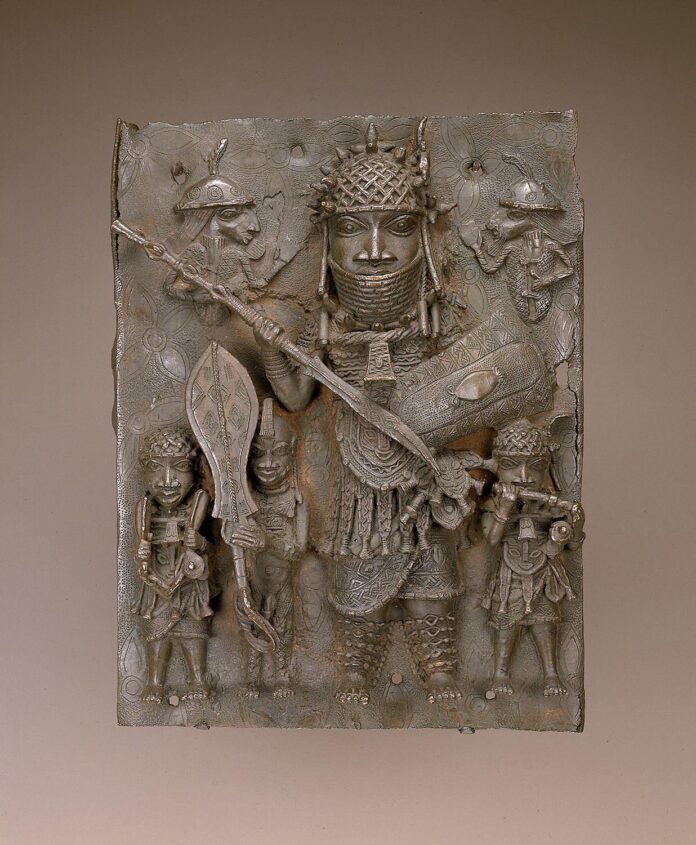 Deadria Farmer-Paellmann, the RSG founder and executive director, argues though that the bronzes are linked to the descendants of enslaved people in America, and that returning them would deny them the opportunity to experience their culture. She is herself a descendant of enslaved people brought to the US from the kingdom of Benin.

The so-called Benin bronzes have become a touchstone to test museums’ readiness to restitute heritage looted from Africa in the colonial era. After the violent 1897 plunder and devastation of the Royal Palace of Benin by British troops, at least 3,000 artefacts were dispersed internationally.

“We specially oppose the return of the 16th-to 19th-century metal bronzes because they were made with melted manilla currency [that] the Benin Kingdom was paid in exchange for our ancestors they sold to European slave traders [into the transatlantic slave trade],” Farmer-Paellmann tells The Art Newspaper, referencing a 2018 book, The Benin Monarchy, edited by the Nigerian lifestyle publisher Oriiz Onuwaje.

But a court on 14 October denied a restraining order requested by RSG, stating that “even if [the] plaintiffs could establish that ancestral link to the bronzes—which they have not done on this record—such an attenuated connection would not give rise to the type of ‘concrete and particularised’ injury necessary for standing”. Crucially the court ruling adds: “The Smithsonian does not appear to have acted beyond its statutory authority by reaching an agreement with Nigeria to transfer some of the Benin bronzes.”

Farmer-Paellmann says, however, that the lawsuit is still pending, adding: “The request for an emergency temporary restraining order was denied (that was only one part of the case). The court is wrong on critical facts. We are about to amend and move forward with the case. There are 29 bronzes connected to the 11 October transfer. Nine are still at the Smithsonian and 20 more will be subject to a vote by the [institution’s] Board of Regents, possibly on 13 December.”

The RSG case aims to block the transfer of the 20 artefacts and reverse the transfer of all “illegally transferred” bronzes including the nine still at the Smithsonian on loan, she adds.

A spokesperson for the Smithsonian Institution says: “The judge’s order speaks for itself. The transfer of ownership has happened; 29 bronzes from the 1897 raid were returned to Nigeria. Later, they [Nigerian officials] signed a loan agreement and the National Museum of African Art [at the Smithsonian Institute] has nine of those bronzes following a standard museum loan agreement.”

Meanwhile, last month the Horniman Museum & Gardens in south London transferred ownership of 72 artefacts from Benin City to the Nigerian government. The Horniman’s trustees agreed in July to transfer ownership, as the “moral and appropriate” response to a request from Nigeria’s National Commission for Museums and Monuments.

Six objects from the museum were handed over to Nigerian officials at a ceremony on 28 November including an ivory staff of office depicting a carved relief figure of an Oba (king) and a brass plaque depicting Oba Orhogbua (around 1550-1578).

Richard Beavers has filed a motion to dismiss the lawsuit.