Home News It is 53 years since Caravaggio’s Nativity was stolen in Palermo—Vanessa Beecroft... 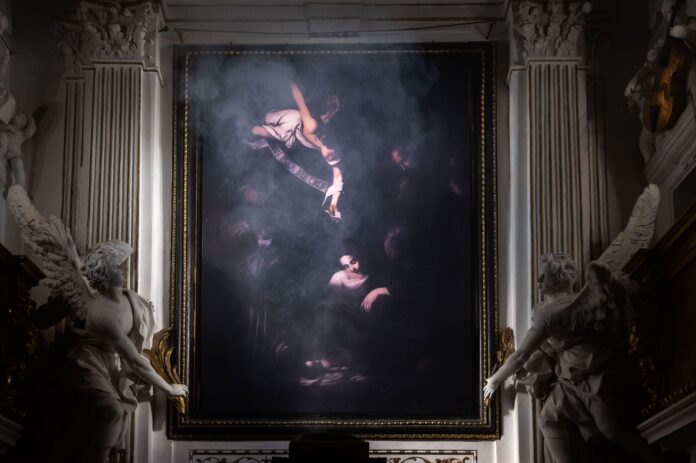 The Italian artist Vanessa Beecroft has unveiled her homage to Caravaggio’s Nativity masterpiece at the Sicilian oratory where the 17th-century work was cut from its frame and stolen more than 50 years ago.

At midnight on Christmas Eve, Beecroft unveiled her “personal interpretation” of Caravaggio’s painting Nativity with Saints Lawrence and Francis of Assisi (1600) at the Oratory of Saint Lawrence in Palermo, Sicily.

“With my Nativity, I want to respect the iconography of Caravaggio. I therefore chose to leave the Divine in the light, and to overshadow the human figures of this [stolen] work,” Beecroft says in a statement. The work will remain on display above the altar of San Lorenzo until 8 January and will then be exhibited in the ante-oratory until 17 October 2023.

The Beecroft initiative was launched by the non-profit Association Amici dei Musei Siciliani as part of an ongoing cultural project known as Next. Artists who have previously paid tribute to the missing Caravaggio work include Alessandro Bazan and Fulvio Di Piazza.

The mystery of the stolen Nativity

On 18 October 1969, thieves cut the Caravaggio canvas from its frame with a razor, rolled it up and fled. The passage of time and the endless versions of events offered by informers and pseudo-detectives have taken over the inquiries, while the actual fate of the Nativity remains shrouded in mystery.

“The aim of the project is to keep the memory of the famous canvas alive and to exorcise, through art, one of the most dramatic events in the history of cultural heritage, an open wound that still awaits, with hope, a possible recovery,” says a project statement.

In 2019, Bernardo Tortorici di Raffadali, the president of the Association Amici dei Musei Siciliani, suggested a number of hypothetical outcomes, including the proposition that the work had been kept in a barn where it was eaten by mice and pigs.

Another scenario involves the British journalist Peter Watson who claimed to have tracked the work down. But the painting was supposedly buried under rubble during the 1980 earthquake in Irpinia while negotiations were underway with the Camorra, the Neapolitan equivalent of the mafia, to exchange it for a cache of drugs and arms.

In all probability, the painting was stolen by the mafia. The theft of the Caravaggio, which is included in the FBI’s list of the top ten art crimes, has featured in the testimony of numerous mafia informants.