Home News Kasmin Has Teamed Up With Mattel for a Pop-Up Launching Artist Mark... 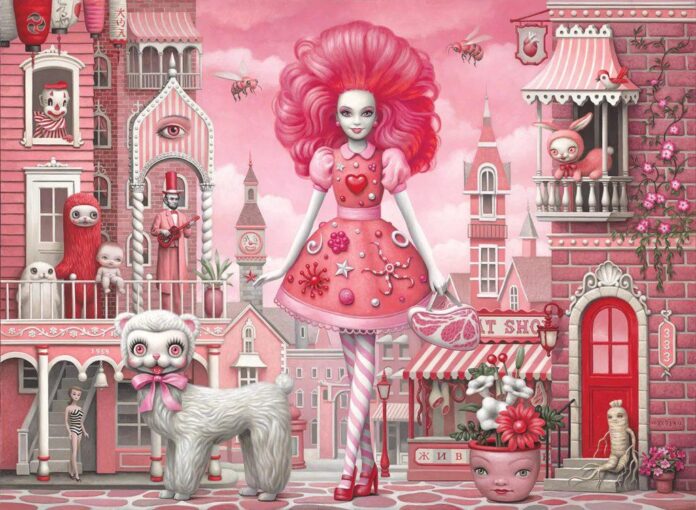 Pop painter Mark Ryden is partnering with the toy company Mattel to design a series of limited-edition Barbies in his signature brand of macabre kitsch.

Ryden’s dolls will be unveiled in a pop-up exhibition set to run November 11 to December 12 in Los Angeles. Co-sponsored by Mattel and Kasmin Gallery, the event, titled “Pink Pop,” will also feature a fresh suite of oil and watercolor paintings, wood and bronze sculptures, and a selection of studies.

Those artworks, Ryden told Ocula Magazine, will depict his “own new personas” for Barbie.

Illustrating his idea, the artist teased one of his new “Pink Pop” paintings—a cotton candy-colored scene that depicts Barbara Millicent Roberts with a rhinestone-studded dress, a purse that looks like a t-bone steak, and a big, blown-out ‘do befitting for a John Waters film.

Elsewhere in the composition are clowns, insects, and dogs dressed like bunnies. Honest Abe Lincoln is there too—strumming a ukelele. Pink Pop Barbie (2021) is the name of the piece.

“It is difficult to define Barbie,” Ryden added. “She is a cultural phenomenon, an archetypal figure. She is a bona fide celebrity, a subject worthy for Andy Warhol to portray alongside the likes of Elizabeth Taylor and Marilyn Monroe.”

Images of the artist’s take on the toy itself have not yet been released and Mattel has not said how much the collectibles will cost.

Long a figure of cultish fascination in the art world, Ryden blends the wide-eyed wonder of Margaret Keane, the mannered style of rococo painting, and the apocalyptic vision of Hieronymus Bosch in scenes that are alternatively sweet and sinister—like a lollipop with a razor blade at the center.

Though Barbie has appeared in his work for almost three decades now (his first-ever depiction of the doll, Saint Barbie from 1994, will also be included in next month’s show), the painter picked a good time to revisit the subject matter. The toy has enjoyed a recent pop culture revival, and next year will see the release of a live-action Barbie movie dedicated directed by Greta Gerwig. Pictures from the film’s buzzy production have already gone viral many times over.

“From the start, Mark Ryden has been an advocate for the idea that toys inspire art and that toys are also a canvas for artists to express themselves,” Richard Dickson, Mattel’s president and chief operating officer, said in a statement.