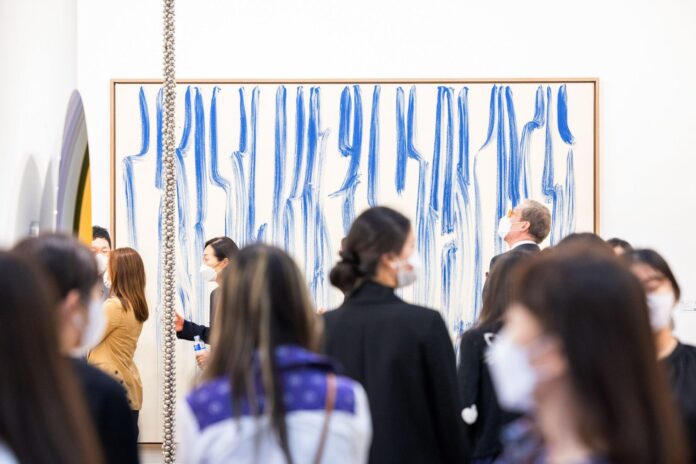 For a short time in September, the Coex convention centre, in the Gangnam neighbourhood of Seoul, South Korea, is set to become the eye of the storm that is fueled by the relentless art fair calendar.

The Gallery Association of Korea has announced a deep roster of participating galleries for the Korean International Art Fair’s (Kiaf) 21st edition in Seoul—a whopping 164 dealers, over 100 of which will be from Korea. Kiaf is the longest running art fair in Korea, which has slowly been emerging as a contender to be the Asian art market’s capital city.

But Kiaf will not be the only game in town. The inaugural edition of Frieze Seoul will run concurrently with the Korean fair, which opens with a VIP day on 2 September and concludes on 6 September. Frieze Seoul will run from 2-5 September. When combined with Kiaf Plus, a satellite fair, which the Galleries Association of Korea says will focus on “ambitious and experimental presentations across diverse genres and practices including new media art and art NFTs”, Seoul’s big fair week will feature a total of around 350 galleries.

“With over two decades of history and experiences, Kiaf is in a unique position to showcase contemporary Korean art in unparalleled depth and breadth,” Dal-Seung Hwang, president of the Galleries Association of Korea, said in a statement. “At the same time, we’re proud to have evolved into a global gathering place for the art world, with our exhibitor list this year more international than ever.”

Despite Frieze Seoul being presented in partnership with the Galleries Association of Korea, the two fairs are technically unrelated. Each will have its own entrance to the convention centre, and according to a spokesperson for the Galleries Association, at least a few galleries will participate in both fairs, including Perrotin, Esther Schipper, Kukje Gallery and Arario.

The Centers for Disease Control says there are high levels of Covid-19 in South Korea, however the country’s mask mandate was dropped in May. Visitors will need to show a negative Covid-19 test prior to traveling and another within three days of arriving. According to the US Embassy and Consulate in the Republic of Korea, a positive test will land you in a government-designated quarantine facility for 7 days and you will have to pay for any treatment.