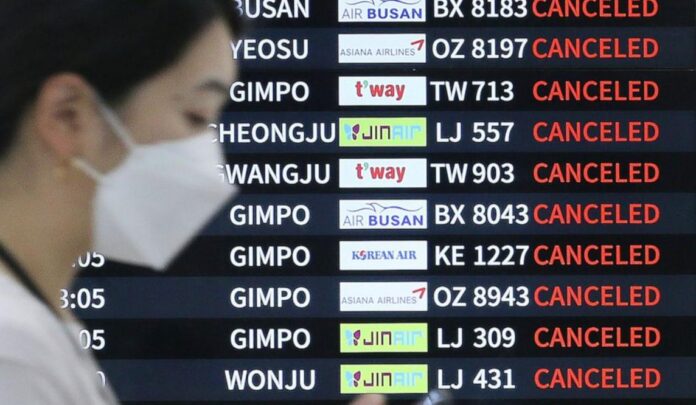 South Korea is bracing itself for its strongest storm in history, with Super Typhoon Hinnamnor bringing strong winds and rain to the country. Having already reached the southern island of Jeju, it is expected to bringing 12 inches of rain to Seoul tomorrow, placing the nation on its highest level of typhoon alert. Korean Air Lines and Asiana Airlines have reportedly cancelled hundreds of domestic flights from Seoul after 1pm Korean time on Monday, with routes between Japan and Korea also expected to be affected. So far, those in town for Frieze and Kiaf seem to have made their flights safely, with the worst weather not expected until tomorrow afternoon. But with the fair’s unusual dates extending until today, a number of dealers could find their flights home delayed or cancelled. A Frieze spokesperson says there is “robust emergency planning for all potential scenarios”. Good luck to all!

In a clear sign of Seoul’s commitment to its contemporary art scene, media were invited to a dinner held by the city’s mayor, Se-hoon Oh, on Saturday night for the occasion of Frieze Seoul. (We are told that a dinner of this nature has never before been organised for Kiaf). Oh, a right-wing figure who has expressed interest in becoming president, made clear his intentions on turning Seoul into Asia’s premier art hub: “There has been K-Drama, K-Pop, why not K-Fine Art?” he asked. He made his rousing speech through a translator, which caused minor confusion after attendees were told that Frieze, which signed a five-year contract with the Coex convention centre in Gangnam, would from next year hold the fair in specially designed tents elsewhere in the city. A Frieze spokesperson quickly confirmed that Oh actually said that these are future plans, with the company intending to see out the rest of its Coex contract.

Pace gallery’s chief executive Marc Glimcher gave a tour of the new tea house that has opened in the gallery’s huge, three-storey Seoul space (loftily termed an art complex). This addition, according to Glimcher, reifies the gallery’s mission to bring art to the masses and turns Pace into a convivial place where art is no longer unapproachable. This is something that is harder to achieve in cities such as Beijing, where Pace closed its location in 2019—Glimcher referred to this space as a “ghost town” in its final days. The conversation then inevitably turned to other burgeoning Asian art hubs, particularly Tokyo, which are vying with Seoul for the art market crown. Asked whether he would consider a location in the Japanese capital, he says that “bureaucratic blockades” are currently a deterrent. He refers to current laws that require dealers to pay a downpayment for potential sales on art, which is returned (after some delay) if the work doesn’t sell. However, he notes that laws are changing, and competition from Seoul will likely encourage Japan to streamline certain processes. He concludes that there will be an answer to a potential Pace Tokyo in the not-too-distant future”.

Seoul of the parties

On Friday, the first day of the fair, a number of Seoul galleries held evening events, from a sleek cocktail event at the Dolce & Gabanna flagship store hosted by Various Small Fires, to drinks receptions at the Korean blue chip dealerships Kukje and Gallery Hyundai. Later, the Thai artist Korakrit Arunanondchai celebrated the opening of his solo exhibition at ArtSonje Centre with a party at the nightclub Cakeshop—a favourite of Seoul’s underground scene—where live dance performances accompanied a soundtrack of Kylie Minogue and bhangra and jungle-infused beats. Across town that same evening the artist Haegue Yang threw a party for which she served as bouncer—rejecting a number of those who queued up to get in.

Bleary eyed, the jetlagged crowds trooped onto Saturday’s proceedings, where the galleries Sadie Coles, Kurimanzutto and Commonwealth and Council threw a rager in an unfinished industrial building. To cap it off, one of Seoul’s most fashionable collectors Jimmy Chung helped organise a midnight-till-late party at the music venue Ohho. Guests, including the local artist Alvin Tran and the publicist and advisor Inhye Kim, swapped Seoul fashion tips. Revellers pounded the local rice wine makkoli courtesy of the party’s sponsor Boksoondoga, and danced to thumping techno before disappearing off into the night—that is if they could ever find a taxi. The difficulty of finding a cab has plagued Frieze visitors this trip (apparently 10,000 taxi drivers in Seoul quit their jobs during the pandemic to deliver food). But we’ve also heard of instances in which best friends—and romantic partners—have been made through strangers being forced to share taxis across the capital. Let’s hope for more cultural exchanges when we come back next year. Until then, Seoul!

A New Show Explores the Legacy of Forrest Bess, a Fisherman by Day and a Painter of Wild Visions by Night

Brazilian Curator Adriano Pedrosa Will Helm the 2024 Venice Biennale, Making Him the First Latin American to Organize the Event