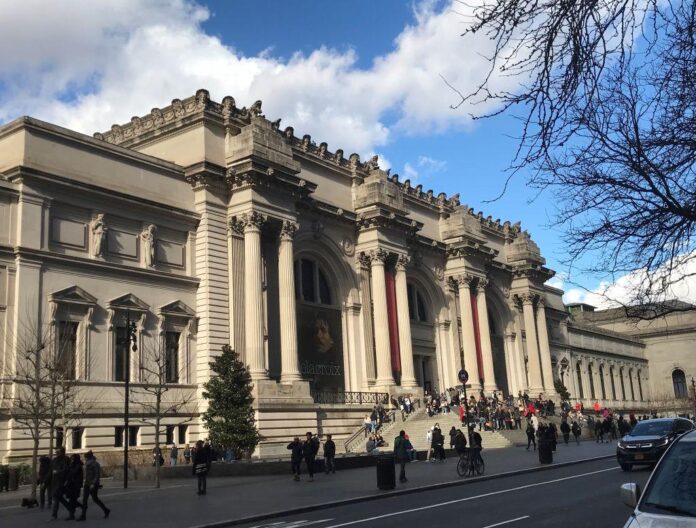 The ‘Festival of Brexit’ Was a Flop – The Unboxed festival, which was sold as a celebration of Brexit, was only visited by 238,000 people during its run from March to October. The organizers had expected 66 million would come to the arts and culture event, which cost £120 million ($138 million) to put on. Pro-Brexit politician Tory Jacob Rees-Mogg had coined it as a “festival of Brexit” and it stuck, and harmed the event’s public appeal, even though organizers tried to distance themselves from politics. (Evening Standard)

Artist Calls Decision to Scrap His Sculpture ‘Authoritarian’ – A planned sculpture depicting a buffalo and a buffalo trader, made by internationally renowned artist Ken Lum, has been languishing in storage after it was rejected by Edmonton officials. Officials are concerned the work could be offensive or hurtful due to the colonial elements in it. Lum has pushed back, expressing dismay that the city has decided it isn’t allowed to even depict the buffalo fur trader. “Public art should be about asking questions,” he said, saying stopping its installation “in advance of someone who may object to it is authoritarian.” He added that the work is “thoughtful” and “quiet,” and that it was meant to address complex questions about the continuity of colonialism today. (The Art Newspaper)

Investigators Seize 27 Antiquities From the Met – Artifacts valued at more than $13 million were seized from the Metropolitan Museum of Art over the last six months, and they will be returned to Italy and Egypt during ceremonies this coming week. Investigators seized the pieces, which can be traced back to ancient Rome, Greece, and Egypt, with three separate search warrants, alleging that they were looted. Some works passed through the hands of Gianfranco Becchina, who ran a gallery in Switzerland and was investigated for illicit trading in 2001. ()

Johann König Responds to Allegations – In response to a story in alleging that König had inappropriately touched and made sexual comments to several women, the dealer has stepped forward to defend himself, announcing that he will take action against the “defamation.” He said he is shocked and that the story has incorrections. In a statement sent to Artnet News, König said he had “a dissolute and impulsive way of partying, dancing, and talking” during the years where the alleged harassments took place, adding that his partial blindness “may have led to women or even men feeling harassed by me, or my actions even perceived as assaultive.” (Press release)

Judge Dismisses Nirvana Baby Lawsuit – A Los Angeles judge has dismissed a lawsuit from Spencer Elden, who appeared as a baby naked on the cover of rock band Nirvana’s 1991 album. Elden said the image amounted to child pornography and that the image caused him “permanent harm” and a “lifelong loss of income-earning capacity.” The judge ruled that the case was filed well past the statute of limitations of 10 years. (Vulture)

Christine Macel Is Nominated at Musée des Arts Décoratifs – The former curator at the Center Pompidou, and director of the 2017 Venice Biennale, will head to French museum. She will succeed Olivier Gabet. ()

French Art Dealer on Trial for Antiquities Trafficking – A Paris prosecutor demanded that Didier Wormser receive a suspended sentence of three years’ imprisonment and a €100,000 ($100,000) fine for alleged antiquities trafficking. The French art dealer, owner of L’Etoile d’Ishtar Gallery, stands accused of trafficking looted Egyptian objects. Some individuals named in the case, which was heard at the end of August, were also implicated in other trafficking scandals, including the ongoing investigations around the Louvre Abu Dhabi and the Met in New York. The prosecutor, François Antona, requested that artifacts seized during the investigation be repatriated to Egypt. Wormser said the works in question were acquired in “good faith.” (TAN)

Korakrit Arunanondchai Films Were a Hit at Seoul — Visitors looking to break free from the art fair circuit and ponder some big questions gathered at Art Sonje Center in Seoul to see two of the biennial star’s films, and The pair of works are conceptual siblings—is a documentary-like take exploring the Bangkok political protests in 2020 and historical and personal narratives. is a more loosely plotted, science fiction take on death and rebirth. ()