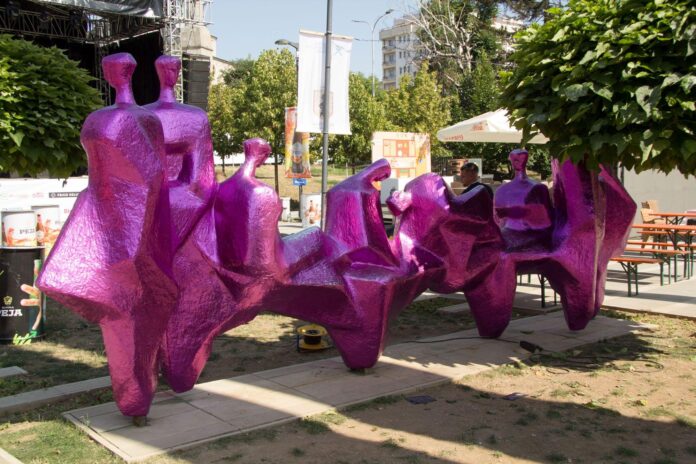 Against the backdrop of Russia’s invasion of Ukraine and increasing global political and social instability, the central theme of this year’s Manifesta—the nomadic European biennial—which explores how we create stories and share them across cultures and communities has never felt more urgent. While its location in Pristina, the capital of a new-born country recreating itself after a war in large part founded on conflicting historical and cultural narratives, is the ideal host city. And for Kosovo, whose citizens are only able to travel to four countries without a visa, Manifesta is no small matter, bringing collectors, artists, journalists, and art lovers from around the world and offering the tantalising promise that their homeland can become an integrated part of the European and global community.

Feedback on the show from visiting collectors and gallerists, as well as from the artists and organisations participating, has been overwhelmingly positive. There has been praise for the high quality of much of the work, surprise at the creative energy and talent of young Kosovan artists, and delight in the chaotic sense of fun and the deep hospitality of the people and the city, which greeted guests of the opening weekend with receptions, performances, concerts and after-parties.

Showcasing the work of more than 100 artists, of which over half are either Kosovan or from the Western Balkans, Manifesta 14 is centred around the Grand Hotel Prishtina (a maligned hotel with a chequered past) [https://www.nytimes.com/2018/03/01/world/europe/kosovo-grand-hotel.html], which is crowned with an installation by Petrit Halilaj, who represented Kosovo at the Venice Biennale in 2013.

Inside the hotel, the exhibition spans several thematic floors with works spanning the widest range of artistic endeavour. Some of the video works on show, such as Emily Jacir’s Letter to my friend, feel overly long for the show’s format. But this is balanced by pieces such as the Albanian artist Adrian Paci’s visually satisfying The Wanderers, whichmakes a powerful examination of the emotions of migration, and Alketa Xhafa Mripa’s intimate In the Name of the Father, in which she bathes her elderly father. Lawrence Abu Hamdan’s installation Earwitness Inventory continues his fascinating work analysing the acoustic testimony of political prisoners, while the emerging Kosovar artists Brilant Mazimi, Dardan Zhegrova and Doruntina Kastrati use painting, multi-media sculpture and immersive installation to inject strange and sometimes unsettling worlds into the long hotel corridors and dusty rooms.

Outside the hotel walls another 25 venues are dotted among the café-thronged streets. Among these is a Yugoslav monument wrapped by Ugo Rondinone in purple foil; the 15th century Grand Hammam, where Chiharu Shiota has created an ethereal and highly affecting installation of red thread with the handwritten personal stories of hundreds of Kosovans; and the Gërmia Department Store, where Alban Muja’s installation of a small house perches jauntily on the roof.

In the National Gallery of Kosovo, Alevtina Kakhidze intrigues and shocks with her research on invasive plants, virtual reality views of bombed Ukrainian buildings, and drawings made in the cellar of her home outside Kyiv, where she sheltered from Russian bombs this spring. Self-Splaining (a Triumph of Empathy), a group exhibition of Bulgarian artists curated by the Sofia Institute of Contemporary Art at the Faculty of Arts Gallery of the University of Prishtina is slickly produced, while Nikola Mihov’s photographs of his visit as Santa Claus to his dying mother’s hospice and Mariela Gemisheva’s life-affirming video work of elderly women putting on a fashion show deserve particular mention.

But the show does not stop in Pristina, and 25 miles away, in Mitrovica, an epicentre of Kosovan-Serbian tensions, Stanislava Pinchuk’s installation Europe Without Monuments, a thoughtful meditation on the positive potential and danger of monuments, sits in the river that splits the divided town, in the shadow of a bridge still patrolled by Nato soldiers.

Beyond the artistic core of the show, CRA (Carlo Ratti Associati) were chosen for Manifesta’s other mission of “reclaiming the city model” through “participatory urbanism”. Ratti himself believes that CRA’s novel approach to transforming cities could become known as “the Pristina model”. How the urban transformation vision will develop over the course of the biennial remains to be seen, but beyond the sensitive renovation and relaunch of a disused library in the new guise of the Centre for Narrative Practice, Ratti’s dream seems distant for now.

The Green Corridor, a path built on a disused railway line to connect the centre of the city with its industrial hinterland, is little more than a dusty and sunbeaten gravel track punctuated by desiccated saplings and flanked by thundering main roads and shunned by locals, while Prishtina’s largest post-industrial site, the derelict Brick Factory, where Berlin collective raumlaborberlin will be conducting workshops in eco-urban learning, feels at this early stage like the marginal venue for illegal raves.

A show on the scale and with the lofty ideals of Manifesta is always going to be challenging, even more so in a country with very little creative infrastructure or experience of hosting such an event, but Catherine Nichols, its creative mediator, should be commended for a joyous, serious, and eye-opening effort of collaboration, and one can only hope that it leaves a lasting legacy for both the artistic and wider community of Kosovo.