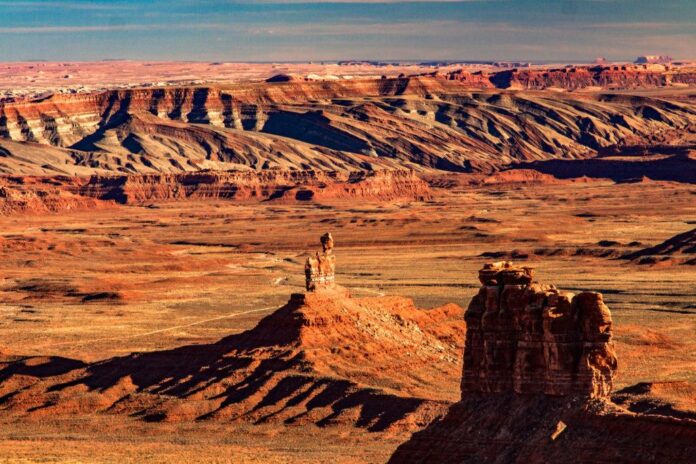 In a lawsuit filed this week in U.S. District Court, the Utah Attorney General’s office argues that Biden overstepped the authority granted him by the Antiquities Act, a 1906 statute signed into law by Theodore Roosevelt in 1906 that gives the president power to establish national monuments on federal lands.

The act, according to the lawsuit, allows the president to reserve only the “smallest area compatible with the proper care and management.” Biden’s 2017 executive order designated 1.87 million acres around Grand Staircase-Escalante as protected land, effectively reestablishing the domain originally allocated by President Clinton in 1996. Biden also expanded Bears ears to 1.36 million acres—a slight increase in size from the area first laid out by President Obama in 2016.

The two sites are now overseen by the Bureau of Land Management, with the latter also co-managed by a coalition of five Native American tribes whose ancestors inhabited the region: the Hopi Tribe, the Navajo Nation, the Ute Mountain Ute Tribe, the Ute Indian Tribe, and the Pueblo of Zuni. (Representatives from the Bears Ears Inter-Tribal Coalition declined to comment when reached by Artnet News.)

Both monuments are home to thousands of archeological treasures, including ancient rock paintings, pottery fragments, and dinosaur fossils.

🧵/ The lands that make up Bears Ears and Grand Staircase-Escalante National Monuments are a stewardship that none of us take lightly.

But rather than guarding those resources, President Biden’s unlawful designations place them all at risk. pic.twitter.com/YbFbxztWzY

The state of Utah is listed as a plaintiff in the suit, as are Kane and Garfield counties, where the landmarks live. The case also has support from most of Utah’s major political players, including the state’s entire congressional delegation.

“These public lands and sacred sites are a stewardship that none of us take lightly,” the document reads. “The archeological, paleontological, religious, recreational, and geologic values need to be harmonized and protected. Rather than guarding those resources, President Biden’s unlawful designations place them all at greater risk.”

The politicians’ statement suggests that the “vast size” of the two national monuments “draws unmanageable visitation levels to these lands without providing any of the tools necessary to adequately conserve and protect these resources.”

“A congressional solution would be the more effective path for the conservation and management of Utah lands,” Governor Cox and company continue, advocating for a collaborative effort between state and federal agencies, tribal nations, and local governments.

This arrangement, the statement concludes, “could better guard the area’s resources by ensuring tribal access to sacred sites, providing federal agencies with the management tools and funding they need, channeling visitation into appropriate protected locations, and giving local communities the funding and flexibility they need to thrive economically.”

In 2017, former President Trump reduced the acreage of Grand Staircase-Escalante by nearly half, and Bears Ears by 85 percent. The move constituted the largest curtailment of federal land protection in U.S. history.