Home News Leonora Carrington’s Market is Blazing. Now You Can Acquire One of Her... 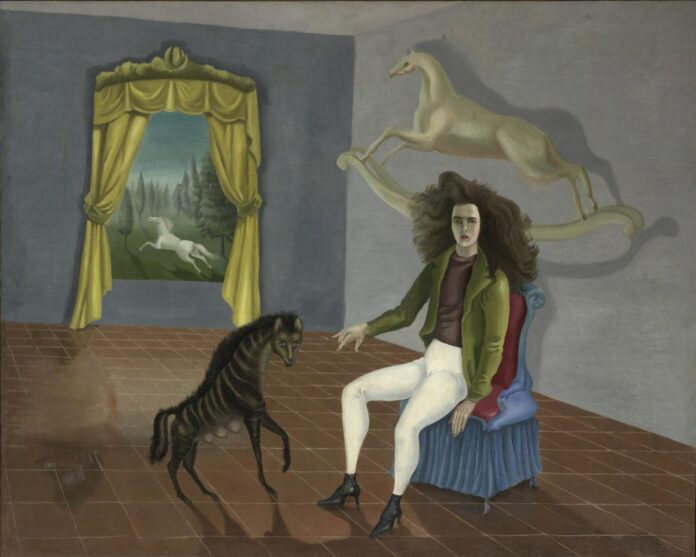 Leonora Carrington, the visionary first-wave Surrealist whose allegorical work mined the dreamscape, cosmos, and soul, is now entering the metaverse.

Like many great stories, this all began with tequila. The British-born Carrington immigrated to Mexico in 1942 (she’d reside there until her death in 2011 at 94). The country and its cultures and mythologies are deeply imprinted on her work. She said of her new homeland: “To discover chipotle chiles and maguey worms! It seemed such an exotic country to me—from the character of the people, their contact with the dead, the variety of food, plants, animals and the landscape.”

In 2009, at age 91, Carrington teamed up with the luxury spirits maker 1800 Tequila to design a limited-edition decanter to house the brand’s 1800 Colección rare extra añejo blend. More totem than decanter, she christened the eerily beautiful silver vessel ‘El Rey del Tequila,’ and like many of her sculptures, it looks like an ancient, mystical relic. Only 15 were produced and none were sold publicly—until now. On September 12, to kick off Hispanic Heritage Month, 1800 Tequila will be the first-ever tequila to be auctioned on BlockBar. The offering consists of an NFT that confers ownership of the ‘El Rey del Tequila’ Leonora Carrington-designed decanter and complementary bottle of 1800 Coleccíon Tequila. 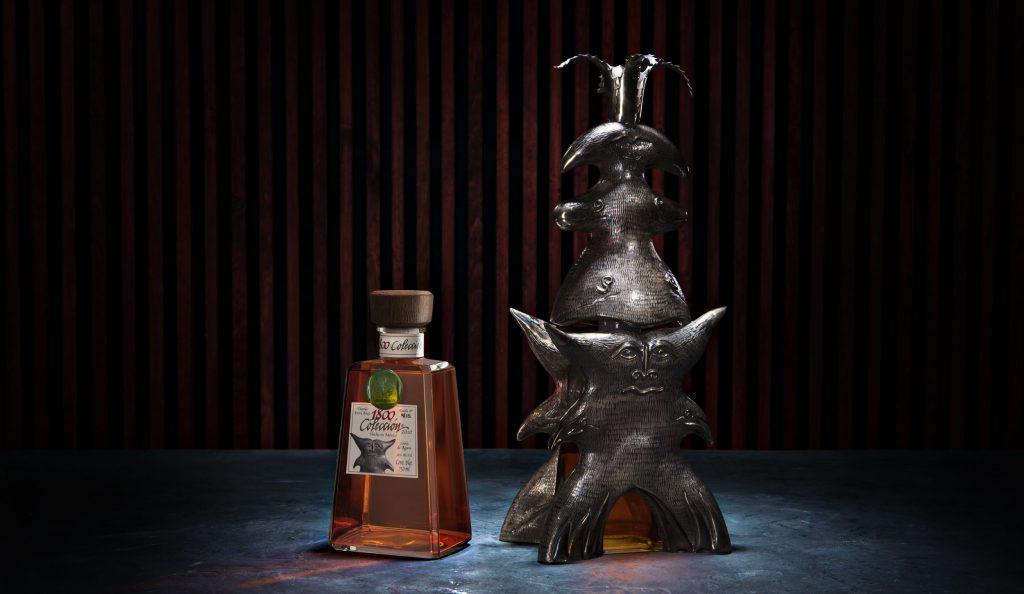 Having won the best taste in tequila and in art, the triumphant bidder will also get a trip to Jalisco, Mexico, for a private tasting at La Rojeña distillery, Latin America’s oldest distillery and the birthplace of tequila, and a private tour of Carrington’s art collection. Half of the proceeds from the NFT sale will benefit the Council of Leonora Carrington for preservation of various collections including drawings, sculptures, and textiles. Bidding starts at $25,000 and will surely augment, a small price for a limited-edition piece by a renowned artist whose legend is growing and star ascending.

Although regarded during her lifetime as a talented iconoclast, like many pioneering women artists, Carrington saw her fame muted by biographical details, including a turbulent romantic life. But in the 2020s, the Carrington resurgence is well underway. Her work has garnered a new generation of admirers in group exhibitions such as “Surrealism and Magic” at the Peggy Guggenheim Collection in Venice, and the Metropolitan Museum of Art’s “Surrealism Beyond Borders.” Her feminist take on the Surrealist spectrum helped shape this year’s Venice Biennale, and its theme, “The Milk of Dreams,” was titled after her illustrated hallucinatory children’s book (Carrington was also a prolific writer).

The reevaluation of Carrington’s work is reflecting in her sales. In May, her oil painting achieved her highest-ever price at auction. With her new canonic status, this trend is forecasted to continue. We took a deeper look at that work, as well as two more characteristic paintings from her top ten auction prices, as recorded by Artnet’s Price Database. 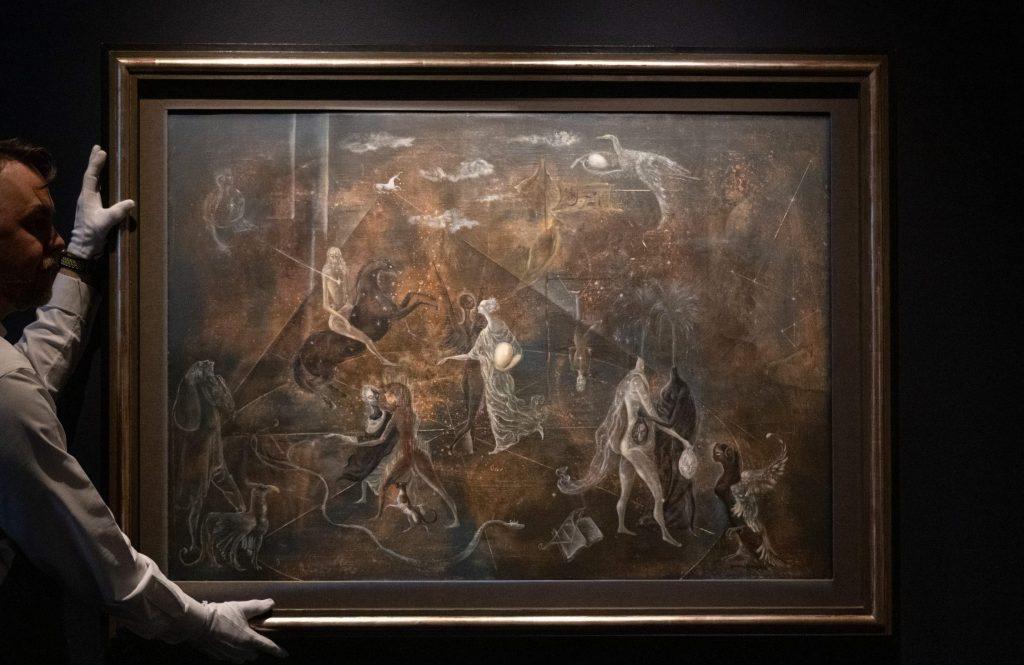 An art handler holds (1957) by Leonora Carrington during a press preview of the Macklowe Collection and spring evening sales at Sotheby’s on May 6, 2022, in New York City. Photo: Alexi Rosenfeld/Getty Images.

Carrington had a deep interest in alchemy. She named this painting after the 16th-century Swiss alchemist and “father of toxicology,” who was reported to have been seen dancing in his garden with spirits. Carrington’s opus depicts intermingling deities, light paired with dark. Two of the characters embrace, holding each others’ heads, their necks spurting fountains. There are griffins and a favorite motif, anthropomorphic birds. At the center of it is another symbolic mainstay of Carrington’s work: the egg. In her memoir she writes: “Why should it not enclose my own experiences as well as the past and future history of the Universe? The egg is the macrocosm and the microcosm, the dividing line between the Big and the Small which makes it impossible to see the whole.” Reflective of her most accomplished visions, synthesizes traditions from Celtic lore, Catholicism, the occult, and Mayan and Aztec myths—all subsumed into her strange brew. 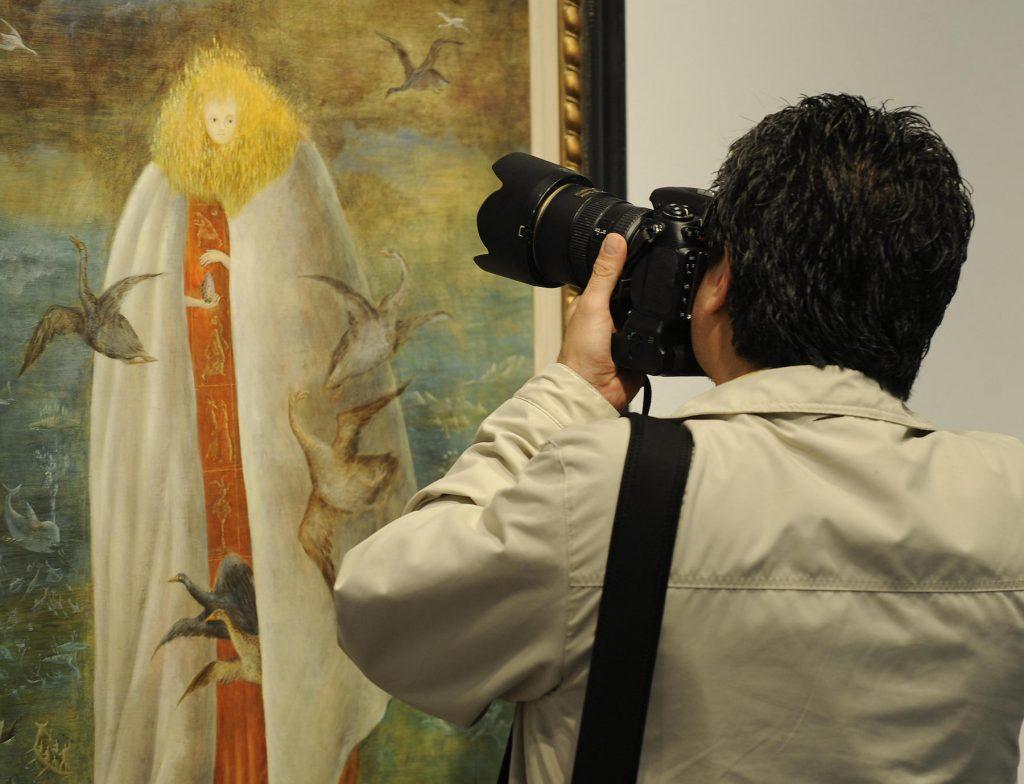 Leonora Carrington, (1947) during a media preview for the Christie’s Latin American Sale in New York, May 2009. Photo: Timothy A. Clary/AFP via Getty Images.

This work is also known as “The Guardian of the Egg.” The subject is a serene, goddess-like being, the fulcrum of a world swirling around her. She herself is rather egg-shaped, and two hands emerge from her white robe cradling a speckled one. In a letter to her friend the collector Edward James, Carrington wrote about the painting: “It’s a sort of giantess with a moonlike face in a field of wheat which is also golden hair. Her cape is white and she has a russet red dress with panels in which birdlike people are conversing. Out of the cape comes wild geese which encircle her—goose-colored geese. She is standing against a sort of turquoise sea in which there are small islands.” The tempera on board was included in Christie’s Latin American Art sale in May 2009 just two years before the artist’s death, and scored a then-record price for her work. 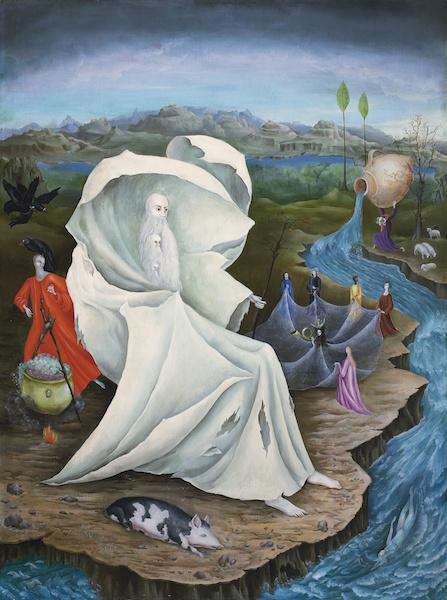 Leonora Carrington, The Temptation of St. Anthony (1945). Courtesy of Sotheby’s.

The origin of this work nearly beggars belief. Filmmaker Albert Lewin tasked ten Surrealist artists to portray the temptation of the third-century Egyptian desert-dwelling Christian hermit in a competition to promote his 1947 film . The jurors were Alfred Barr, the first director of the Museum of Modern Art; artist Marcel Duchamp; and gallerist Sidney Janis. The winner’s painting would be featured in a film. Other competitors included Salvador Dalí, Ivan Albright, and Carrington’s lover, Max Ernst (who won).

Anthony, the patron saint of swineherds, is often portrayed with a porcine sidekick, but the animal is a familiar in Carrington’s universe as well. While several sources could have fed her interpretation, Carrington’s jumping-off point was the Gustave Flaubert novel centered on the tempters Nebuchadnezzar and the lustful Queen of Sheba. Of the painting, Carrington said: “The picture seems pretty clear to me, being a more or less a literal rendering of St. Anthony, complete with pig, desert, and temptation. Naturally, one could ask why the venerable holy man has three heads, to which one could always reply, why not?” The painting was featured in the single-owner sale “A Vision of Grandeur: Masterworks from the Collection of Lorenzo H. Zambrano” at Sotheby’s New York in November 2014.